Market review: overall this week, bismuth prices continued to decline in the first half of the week, while bismuth prices began to stabilize in the second half of the week. As there is still no significant improvement in domestic and foreign demand, in addition to some just needed and a small amount of speculative demand, the market trading situation has not improved significantly compared with the previous period, and the market trading volume is still on the low side. Starting from the second half of the week, the attitude of the market supplier began to change slightly, as some manufacturers began to sell, coupled with a slight increase in market inquiries compared with the first half of the week, bismuth prices began to stabilize. By the end of this week, the mainstream price of SMM bismuth ingots was 31500-32500 yuan / ton, down 500 yuan / ton compared with last week. At present, a small number of resources in the market are less than 32000 yuan / ton, and other sellers' quotations have begun to stabilize at more than 32000 yuan / ton, but in terms of the actual transaction situation, there are still more inquiries and less actual transactions. 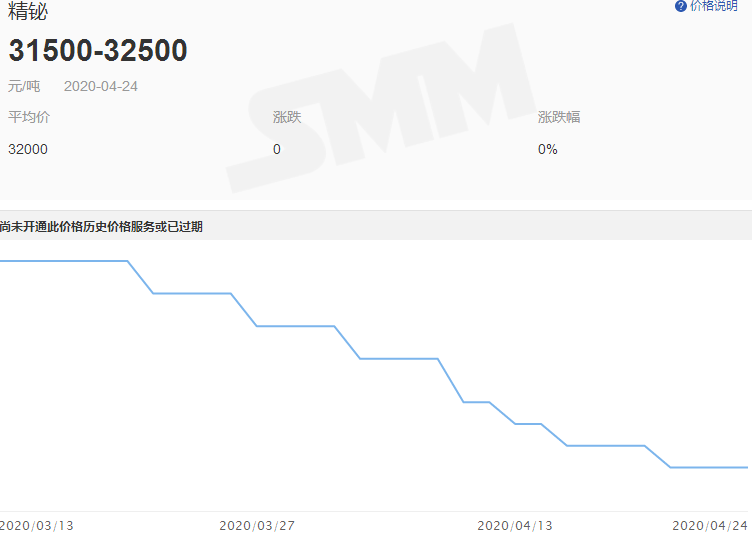 "View the exclusive historical price of bismuth in SMM

At present, the consumer side of bismuth ingots, downstream buyers of wait-and-see sentiment is still quite heavy, according to market participants, because the downstream inventory is still relatively sufficient, so the current inquiry mentality is only to try the water, to see if there are low price resources to reach the heart price, but the actual desire to buy is general. And manufacturers have also said that the current price has reached a historic low, the cost of support is also increasing, coupled with the current inventory pressure in many smelters is not great, and even many manufacturers do not have too much inventory, so they also try to bid. The market is currently entering a stalemate between buyers and sellers, and next week is nearing the end of the month, and market prices are expected to remain stable next week.