According to real-time statistics from Johns Hopkins University in the United States, as of about 7:00 Beijing time on the 23rd, the total number of confirmed cases of the global epidemic has exceeded 2.64 million. Italy and France reported the highest number of new confirmed cases in four days, with Spain extending the blockade and Singapore with more than 10,000 new confirmed cases as the number of foreign workers soared. The new crown epidemic continues to raging overseas, and various countries have raised alarms one after another. Affected by this, mine production in some overseas areas has been blocked one after another since the end of March, and news of reduction and suspension of production has emerged frequently. Among them, Peru blockade period from 16 March to 26 April (a total of 42 days), Bolivia blockade period from 22 March to 15 April (25 days), Mexico blockade period from 30 March to the end of April, while India, Ireland, Canada (Ontario) and Spain (Andalusia) mining industry is considered to be indispensable industries, so mining operations during the blockade period remained basically normal. So far, SMM has initially quantified the impact of the epidemic on lead and zinc concentrate production based on relevant announcements and information: 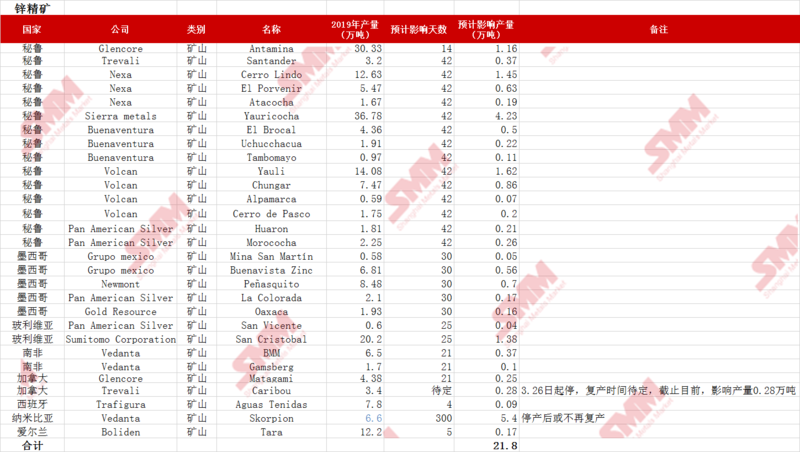 The production of the mine import source country is blocked, the superimposed epidemic situation affects the port transportation progress, the imported ore supply of the port of our country is tight, at the same time, the domestic epidemic situation slows down the progress of mine resumption in the low altitude area, the mines in the northern high altitude area have not completely resumed construction because of climatic factors, in addition, the raw material inventory of zinc smelter is below the warning line, the supply is smaller than the demand, and the TC of zinc concentrate decreases significantly. On the other hand, due to the fact that lead smelters have good stocks of smelting raw materials, and some primary lead smelters can rely on dismantling waste lead-acid batteries as a supplement, the decline in TC has been relatively flat. In May, the performance of supply and demand at the end of the mine is difficult to reverse, and considering the problem of shipping time for imported mines, the supply of imported mines may be further tightened, and the downward trend of TC has not yet reached the bottom. (for specific changes, please pay attention to the May TC guidance quotation announced by SMM on the 24th)