SMM4 14: today's morning non-ferrous metals market rose and fell each other, Shanghai lead rose nearly 2.3%, Shanghai zinc rose nearly 0.7%, Shanghai tin rose nearly 0.5%, Shanghai copper weak floating red, Shanghai aluminum fell nearly 0.1%, Shanghai nickel fell nearly 0.5%, early, the domestic futures market floating green in a large area, but the non-ferrous plate as a whole followed by a strong trend, but some metals have fallen back. Affected by the epidemic situation, the disturbance of overseas mines has increased, and the expectation of tight supply side has brought support to non-ferrous metals. On the copper side, the Peruvian Antamina copper mine, which is co-owned by Glencore, BHP Billiton and Tek Resources, announced on Monday that it would suspend operations for at least two weeks. The mine will produce 448590 tons of copper in 2019. Last week, Peru's state of emergency was extended until April 26.

In terms of lead, domestic epidemic control is effective. The operating rate of lead concentrate in March was 34.1%, up 15.9% from the previous month. The survey involved 86 enterprises with a production capacity of 767000 tons. In March, the operating rate of lead concentrate rebounded, mainly because the epidemic situation of the new crown in China had been effectively controlled, the government vigorously advocated safe resumption of work and resumption of production, and the mines recovered in an orderly manner according to their own actual conditions, and the comprehensive operating rate was substantially overhauled. Total output of miners rebounded in March. Looking forward to April, domestic production enterprises basically return to normal, superimposed northern high-altitude area temperature warming month by month, it is expected that the operating rate in April may continue to repair.

In the black system, iron ore rose by nearly 0.5%, thread by nearly 0.3%, hot coil by nearly 0.2%, stainless steel by nearly 0.1%, and coking coal and coke by nearly 0.1%. In March, the epidemic abroad fermented and the economic downside risks increased, while domestic steel mills expanded their profits and their supply recovered first. But demand recovered less than expected, and inventories remained high. Iron ore in March due to the epidemic, domestic ore supply is still limited, so the overall rise in domestic mine prices; in late March, imported mine prices fell, affected by this, the price of domestic mines in late March is also weak operation. Thread stocks may rise in April because of continued macro uncertainty, but inventories continue to fall as the marginal impact of peripheral market interference weakens and demand picks up. Hot coil, April supply side reduction and demand side recovery space are limited, fundamental pressure relief is not obvious. Superimposed on the current hot rolling inventory pressure is still large, the spot price is suppressed, so the overall spot price in April is expected to be in a volatile weak trend. On the iron ore side, lump ore and pellet premiums were under pressure in March. In April, with the increase of domestic mine production, the supply of domestic refined powder is expected to rise month-on-month, and the pellet premium is expected to continue to come under pressure.

Crude oil fell nearly 2.7% in the last period, and the historic production cuts signed by the world's leading oil producers are not enough to ease current concerns about demand damage caused by the new crown virus epidemic. Analysts point out that it seems appropriate that the market reaction to the OPEC+ cut-off agreement has been mediocre. The deal looks like a last-minute desperate attempt to shock the market by its size, but given the extent of the deterioration in demand, the effort has so far failed. Many countries are in a state of blockade almost all over the country. As a result, global fuel consumption has fallen by about 30 per cent. Even if production is cut, it is expected to lead to months or even years of oversupply. This could limit the rise in oil prices, even after the OPEC+ deal.

On the precious metals front, Shanghai gold rose nearly 0.8 per cent and shanghai silver rose nearly 1.6 per cent on growing concerns that the epidemic had led to a more severe downturn in the global economy and a blow to US corporate earnings, increasing the safe haven appeal of gold. Last week, the Fed announced up to $2.3 trillion in additional aid, including pledges to support risk corners of the market, as investors sought safe havens amid fears of rising global debt and a bleak economic outlook. Major US stock indexes fell on Monday, with the Dow falling more than 500 points at one point as US companies entered the earnings season and profits are expected to be hit by the new crown outbreak.

As of 09:40, contracts in the metals and crude oil markets: 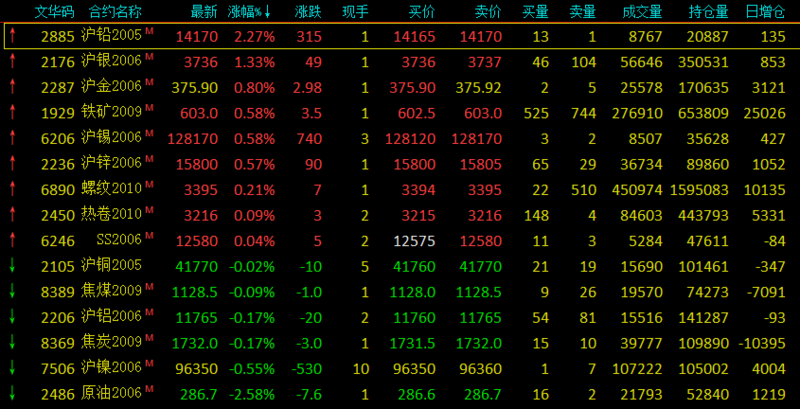 As of 09:40, HKEx had added US dollar-denominated small metal contracts:

Aluminum: yesterday's long short game is fierce, crude oil prices continue to boost non-ferrous, domestic fundamentals, the supply side slightly narrowed, the demand side nearly two weeks of domestic trade month-on-month warming, the overall trading mood is optimistic. It is expected that the Shanghai aluminum main concussion today will run at 11700-11900 yuan / ton, and the spot will be posted 20 yuan / ton to rise 20 yuan / ton that month.

Zinc: overnight, according to SMM, as of Monday (April 13), the total inventory of zinc ingots in SMM Seven places was 286600 tons, down 10800 tons from last Tuesday (April 7). This weekend inventory decline is mainly concentrated in the Shanghai area, near the weekend downstream enterprises have a strong willingness to replenish the warehouse, larger volume of purchases led to the warehouse; in addition, Guangdong and Tianjin areas have recorded a small accumulation of warehouses, Guangdong area is subject to weak downstream consumption, poor transactions; Tianjin area is mainly due to some smelters to sell, the pace of shipment has slowed significantly. Consumption in the lower reaches of China has gradually resumed, and the resumption of terminal projects has also brought about an increase in orders, resulting in the social treasury entering the stage of going to the storehouse. However, under the influence of the overseas epidemic, it is expected that the reduction in consumption in the future will be greater than the reduction in supply, and the space above zinc is limited. The price of zinc is expected to run in the range of US $1880,1930 / ton, and the contract price of Shanghai Zinc 2006 is expected to run in the range of 15300,15800yuan / ton. The domestic double swallow zinc increased the water by 60-80 yuan / ton in May contract.

China Refined Nickel Imports to Grow in September, SMM Foresees
The profitable import window for refined nickel was open for most of second month of September, a favorable factor for imports.