SHANGHAI, Apr 13 (SMM) – SMM surveyed 41 major aluminium processors in 12 provinces and found that their average operating rate dipped 0.6 percentage point on a weekly basis to 74.4% last week. Backlog orders allowed overall operating rates to remain largely stable. Construction related processors performed the best due to robust domestic demand and little impact on exports. Export orders for May are expected to fall sharply, which will affect aluminium plate/sheet, strip and foil producers the most as export account for a significant proportion of their business. Fewer export orders are likely to weigh on overall operating rates slightly this week. 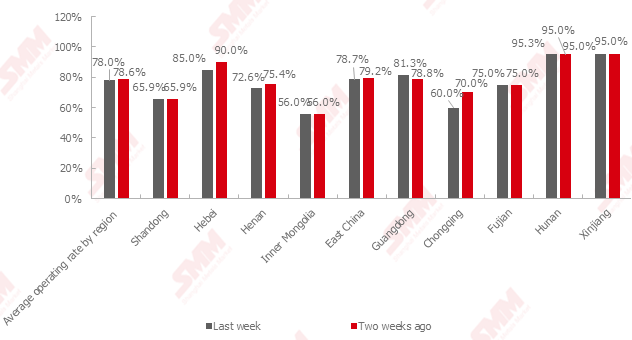 Aluminium foil: Operating rates at aluminium foil producers declined as COVID-19 hampered exports, with foreign clients cancelling or delaying orders. Output of air-conditioner foil increased from March following arrival of the high season, but was lower than a year ago as orders from export-oriented air-conditioner manufacturers declined. Production of light-gauge and medium-gauge foil decreased due to the negative impact on exports. Sluggish global automobile industry forced producers of soldering and brazing foil to slash output significantly. Production of electronics foil could sustain till May due to recovering domestic demand. April used to be the peak season of orders for aluminium foil, but the peak may be delayed or absent this year.

Aluminium wire and cable: Operating rates at large aluminium wire and cable producers dropped slightly. Current production is mostly based on orders received before the Chinese New Year. Production schedules for April are full at some producers, while others reported lower operating rates as some clients in Southeast Asia and South America cancelled orders. State Grid is expected issue tenders for ultra-high voltage and power distribution projects mostly in the second half of the year. Aluminium rod producers reported stable orders from wire and cable producers.

SMM Evening Comments (Feb 4): Shanghai nonferrous metals closed mostly higher, tin fell 1.44%
SHFE nonferrous metals rose for the most part on Thursday February 4 as pessimism about the US economic outlook receded before the release of important data on the jobs market.

All
MOST POPULAR
1.Aluminium Prices Are Likely to Rise and Then Fall throughout 2022
2.Aluminium Billet Inventories Up 36,500 mt on Week
3.Aluminium Social Inventories Up 2,000 mt on Week
4.Aluminium Prices Will Stand Firm amid Intensifying Energy Shortage in Europe
5.SMM Morning Comments (Jan 17): SHFE Base Metals Mostly Fell under High Inflation
Shanghai Metals Market
Privacy PolicyCompliance CentreSMM Credit ServiceContact UsAbout UsTerms & ConditionsSitemap
Notice: By accessing this site you agree that you will not copy or reproduce any part of its contents (including, but not limited to, single prices, graphs or news content) in any form or for any purpose whatsoever without the prior written consent of the publisher.