Shanghai tin rose rapidly, leading the rise in non-ferrous metals again today, it was reported yesterday that Tianma, the world's largest tin producer, announced that it would delay some exports in March after the outbreak. The company also said it would cut production by 20 to 30 per cent that month while measuring global demand. JFX sales fell 38 per cent in March from a month earlier to 4605 tonnes. Other private tin smelters are also traded through the exchange, but Tianma produces most of the refined tin. Tin concentrate sales fell in March through Jakarta Futures Exchange (JFX), Indonesia's main tin exchange, after Tianma announced a cut in production, and Alpha Ming's tin concentrate production fell 5 per cent in the first quarter.

Aluminum, according to SMM statistics, domestic electrolytic aluminum social inventory since December 30 started storage cycle, three months in a row significantly increased to 1.676 million tons. Into early April, the initial inflection point of inventory, April 9 electrolytic aluminum social inventory fell 69000 tons from the previous Thursday to 1.607 million tons. The decline in supply and the rise in superimposed demand is the direct reason why Guangdong aluminum ingots have gone to the warehouse more than expected recently. However, as the negative impact of the export side is gradually transmitted to the processing enterprises, there is a risk that orders will fall back in the later stage, and the continuous rise in spot aluminum ingots will allow for a certain growth space for subsequent arrivals. In the short term, Guangdong aluminum ingot inventory will continue to decline, but the rate of storage will slow down.

Black system, coking coal up nearly 2%, coke up nearly 1.5%, thread up nearly 0.9%, hot coil, stainless steel, iron ore rose nearly 0.8%, thread, yesterday snail all the way up, spot quotation up, catch up again in the afternoon, all over the increase of 10-40 yuan. In terms of transactions, boosted by the disk, the overall trading condition is good, after the rise, there are still transactions. In terms of mentality, businesses mainly go to the warehouse, and some of them are still bearish about the future.

Crude oil fell nearly 2.2 per cent last period as investors reacted negatively to the cut in production being discussed by the OPEC+, as oil-producing countries led by Saudi Arabia and Russia tried to hammer out a cut in production to address the growing glut amid a 30 per cent drop in global fuel demand. However, analysts said the final cut in OPEC+ production was likely to be lower than expected, adding that the recession triggered by the pandemic had caused too much damage to demand and the problem was not easy to solve.

As of 09:30, contracts in the metals and crude oil markets: 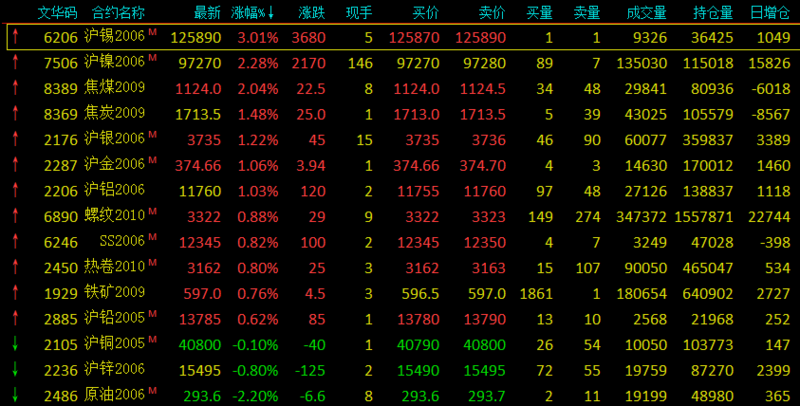 As of 09:30, HKEx had added US dollar-denominated small metal contracts:

Copper: copper prices rebounded in the shock last night and returned to the top of the daily moving average at the end of the day. The main reason for the recent rise in copper prices is 1. Early strong stimulus policies began to release liquidity, the dollar index brushed the recent one-week low to 99.35; 2. Copper raw material supply, including copper concentrate and scrap copper shortage caused by concerns about the supply end of electric copper for some time to come. While the current demand outlook has also been hit hard, including a smaller drop in crude oil production than expected yesterday, strong support is expected below before the macro environment and the state of emergency in important supply countries are not certain when to end. In the spot aspect, the performance of the spot price fell today, and it is expected that it will attract some of the lower prices downstream to buy goods. It is expected that the activity of the spot market will improve significantly, the high shipments of the holders are expected to be positive, and the spot quotation is expected to be raised. Today's copper closed for one day because of Easter, Shanghai copper is expected to 40300-40800 yuan / ton today. Spot water 80-120 yuan / ton.

Lead: overnight, lun lead opened at $1715.5 / ton, Asian time, the market trading is light, Lun lead center of gravity in the last $1715 line, into the European period, Lun lead amplitude intensified, during the low level once reached $1700.5 / ton, after the low integer level support is effective, finally reported at $1725 / ton, up 0.55%. As a whole, the technical support below Lunlead is effective, and it is possible to break through the high position of the box, but the fundamentals of overseas lead are weak, and it is expected to rely on its own power to break through the pressure.

Zinc: overnight zinc recorded a small negative line, close to Brin Road middle rail operation, below support 5 / 10 line, kdj index downward narrowing. There has been a large number of overseas transfers in the past two days, with lme inventories rising sharply to 97975 tons, an increase of nearly 30 per cent in two days, or triggering market pessimism, while domestic refinery production increased to 464200 tons in March, which is expected to be recorded again in April. Short-term Zinc will remain weak, and as a result of the good Friday holiday, the British Stock Exchange will take two trading days and resume trading next Tuesday. It is expected that the contract price of Shanghai zinc 2006 will run in the range of 15100-15600 yuan / ton, and the domestic double Yan zinc will increase the contract by 60-80 yuan / ton in May.

Nickel: Lunni closed in the small balcony yesterday, the K column stands steady 20 days moving average, the K column above faces the boll line middle rail position pressure, follow up pays attention to the Boll line middle rail position pressure situation. The LME exchange will be closed for two days during the Easter public holidays in the UK on April 10 (Friday) and April 13 (next Monday).