Market summary: bismuth prices continue to decline this week, due to the negative impact of the recent epidemic at home and abroad, the demand side is obviously weaker. Coupled with the market concern, the supplier price reduction shipment measures increased. For example, the export of bismuth oxide bismuth products, market participants said that the recent impact of the epidemic, a significant reduction in overseas orders, coupled with domestic buyers have also entered the wait and see, shipment is very difficult, can only rely on continuous price cuts to win market share. Low-cost resources have sprung up in the bismuth market since the start of the week. By the end of this week, the mainstream price of SMM bismuth ingots was 34000-35000 yuan / ton, down 750yuan / ton compared with last week. According to the grapevine, there are already a small number of resources less than 34000 yuan / ton in the market, and it is expected that the resources at such prices will gradually increase. 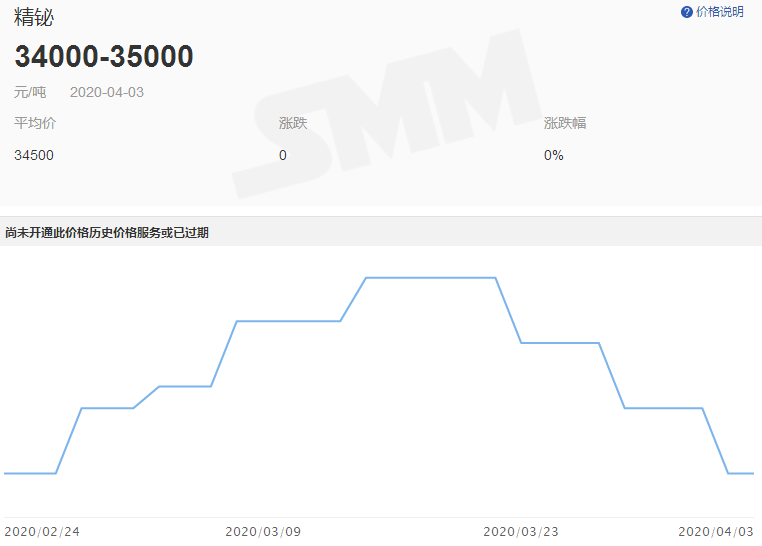 "View the exclusive historical price of bismuth in SMM

At present, the inventory of the main manufacturers of bismuth ingots has also accumulated to a certain height. Some manufacturers are forced by inventory pressure, coupled with a bearish view of the future, so they have also begun to reduce prices to deal with the current situation, and after entering the second half of the week, the actual shipment is not small, so some manufacturers have plans to continue to reduce prices. It is understood that the recent shipments of some manufacturers and middlemen are on a 100-ton scale, and the actual intended transaction price has a certain bargaining space relative to the quotation, which has a certain impact on the future price trend of the market. It is expected that the market price will likely appear a new low next week.