SMM10, March 31: today's focus on the Federal Reserve's interest rate resolution and the U.S. House of Representatives held a full house vote to formalize the impeachment investigation process against Trump.

The U. S. federal funds rate target ceiling (%) in October, the rise and fall of interest rates, reflecting the quality of the economy. During the boom period, raising interest rates meant rapid economic growth and a high rate of return on investment, which was good for the dollar.

China's official manufacturing PMI, in October was a leading indicator of the health of the economy-companies can respond quickly to market conditions, and their purchasing managers may represent the company's main view of the economy.

The monthly rate of actual retail sales in Germany in September (%) is a leading indicator of consumer spending, which is the most important component of overall economic activity. An increase in retail sales boosted the euro.

The initial quarterly GDP rate (%) in the eurozone after the third quarter is one of the most important indicators to measure the state of the British economy, one of the main indicators for the central bank to formulate monetary policy, and one of the bases for markets to predict the future direction of economic and monetary policy, so it will have a huge impact on the exchange rate.

The initial annual rate of CPI in the euro area in October (%), consumer prices are the most important part of overall inflation. Inflation is important for monetary valuation as rising prices will cause the central bank to raise interest rates in order to control inflation targets.

The number of initial jobless claims in the United States in the week ended October 26 (10,000), because the data are released every week, is the focus of the investment market, the sharp increase in unemployment, the U. S. government's fiscal pressure will also increase, for the "double deficit disease" of the U. S. economy is also a test, bad for the dollar.

The US PCE price index in September (%), in January 2012, the Fed set the core PCE annual growth rate of 2% as the long-term inflation target, since then announced that the Fed also has a clear inflation target. If the core PCE rises at an annual rate of more than 2 per cent, the Fed will tighten monetary policy, which is good for the dollar, bullish on gold, silver and copper, and vice versa.

The monthly rate of personal expenditure in the United States in September (%), the personal income index is an effective indicator to predict the spending power of individuals, the future purchase trend of consumers and to assess the quality of the economy. Income is closely related to spending, and the more available income consumers have, the more likely they are to spend more, the better for the economy and the better for the dollar.

The Chicago PMI, Chicago purchasing managers' index in October is expressed as a percentage, often with 50 per cent as the dividing point between economic strength and weakness: when the index is higher than 50 per cent, it is considered an expansion of the manufacturing sector, and when the index is below 50 per cent, especially very close to 40 per cent, there are fears of a depression. The Chicago PMI is also a very important subsidiary indicator of leading indicators, which is valued by the market. 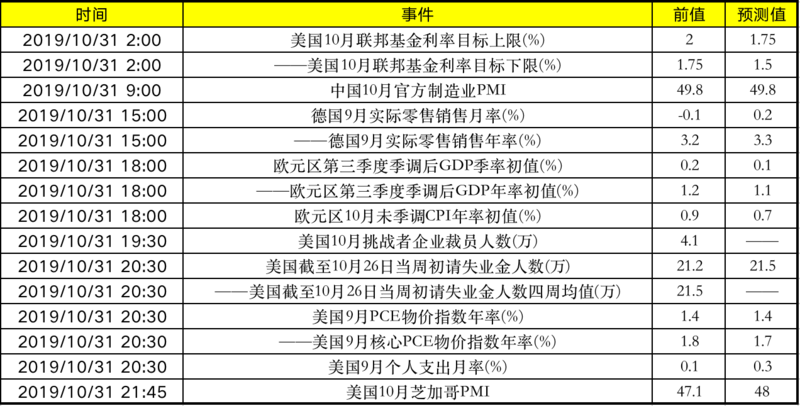