In the United States, API crude oil stocks changed in the week ended October 25 (10,000 barrels), and the number of inventories affected the price of refined oil products that could have an impact on inflation and other economic impacts. The prices of crude oil and oil products will have an important impact on the economy of the United States, a major consumer of the product, as well as on the Canadian dollar, a major crude oil exporter.

The unemployment rate (%) after the quarterly adjustment in October in Germany is one of the most important economic indicators. It is deeply affected by the supply and demand of the labor market and the economic cycle. The unemployment rate also reflects the operation of the economy. Although seen as lagging indicators, the unemployed are an important indicator of overall economic health, as consumer spending is highly correlated with job market conditions.

The economic prosperity index of the euro area in October, through the change of the economic climate index, can reflect the expectations of consumers and business owners for the future economy and consumption, is a leading indicator, and predicts the future economic trend.

The final value of the eurozone consumer confidence index in October, through the change of the economic climate index, can reflect the expectations of consumers and business owners for the future economy and consumption, is a leading indicator, and predicts the future economic trend.

The initial annual rate of CPI in Germany in October (%) the index fell, reflecting the recession, which is bound to be detrimental to the currency exchange rate. But if the consumer price index rises, is the exchange rate necessarily favourable? Not necessarily, it depends on the "rate of increase" in the Consumer Price Index (CPI). If the increase in the index is moderate, it means that the economy is stable and upward, which is of course good for the country's currency, but if the increase in the index is too large, it will have a negative impact, because the price index is inversely proportional to the purchasing power, and the more expensive the price is, the lower the purchasing power of the currency is. it is bound to be detrimental to the country's currency.

The United States ended the week of October 25 EIA crude oil inventory changes (10,000 barrels), this is a U. S. indicator, inventory increase or decrease, will affect the price of crude oil, which in turn has an impact on the Canadian dollar, as Canada's crude oil exports account for a large proportion of the economy. The impact is greater than the weekly change in crude oil stocks by the American Petroleum Institute. 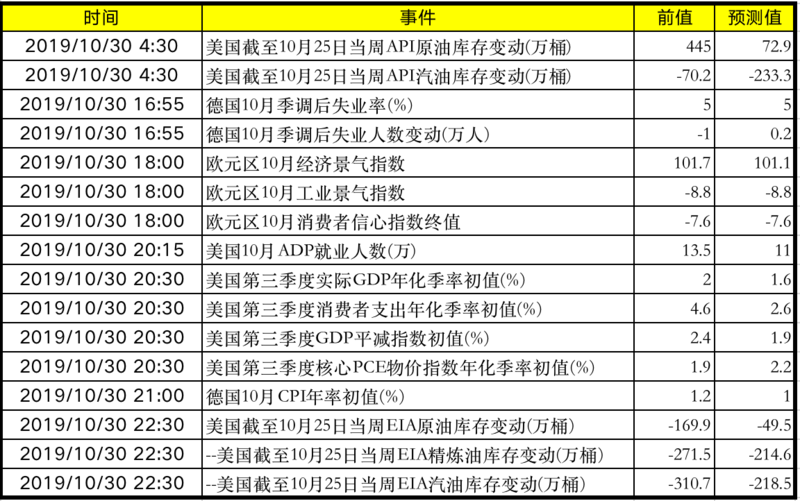