SMM, Oct. 18: this week's volatile foreign exchange markets, mainly dominated by Brexit, sterling this week surged more than 300 points, up more than 2%, leading to European currencies, but also led commodity currencies, but sent the dollar index to a new low in nearly three months. A number of US economic data this week fell short of expectations, raising expectations of further Fed rate cuts this month. The probability that the Fed will cut interest rates by 25 basis points in October is 70 per cent. Us retail sales fell at a monthly rate in September for the first time in seven months, amid fears that manufacturing would lead to economic weakness and data that could push up fears that the impact would spread across the US, putting pressure on the Fed to continue cutting interest rates this month. As consumer spending slows, trade uncertainty persists and disorderly Brexit lingers, economists expect the Fed to cut interest rates in October to sustain expansion. As of October 19, the dollar index was down 1.11% for the week, and the weekly harvest fell three times in a row. There was a small amount of U. S. economic data this week. One of the factors that have broadly underpinned the dollar over the past few months has been the uncertainty of Mr Trump's policies, which has allowed investors to pour into assets such as dollar-denominated Treasuries, which in turn has underpinned the dollar, Osborne said. Yesterday, the dollar closed at 97.1945, down 0.45%, most of the metal rose, Lun lead rose 0.83%, Lun Ni fell 1.04%, Lun Xi rose 1.36%, Lun Zinc rose 0.68%, Lun Aluminum rose 0.06%, Lun Copper rose 0.48%; Most of the domestic metal floating red, thread up 0.21%, stainless steel down 0.79%, Shanghai nickel down 1.05%, Shanghai lead up 0.5%, Shanghai zinc down 0.03%, Shanghai tin up 1.11%, Shanghai copper rose 0.06%, Shanghai aluminum rose 0.4%. As of press time, cloth oil closed at $58.61, up 0.96%, and American oil, up 2.13%, at $54.1.

The total number of oil wells in the week of October 18 in the United States, the previous value: 712, expected:--, announced: 713.

The total number of natural gas drilling in the United States for the week of October 18, previous value: 143, expected:--, announced: 137.

Mysterious relationship: the current trend of WTI oil prices will affect the number of wells in four months' time. 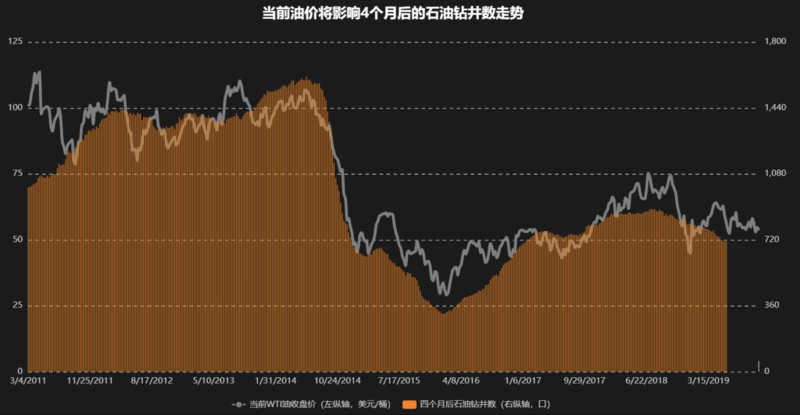