Since National Day holiday, the trading atmosphere of the indium market has changed slightly, gradually from the suppliers trying to raise prices and cherish sales on the eve of the National Day holiday to the gradual increase of the willingness of suppliers to ship goods. The market, which was originally brewing to rise, has entered down-to-earth trading, and the degree of market trading activity has not changed much. Some suppliers continue to maintain the price of refined indium at more than 1100 yuan / kg, but in practice, due to the lack of demand support, it is more difficult to close high-priced indium ingots. Therefore, the transaction price in the refined indium market still maintains a stable and adhesive trend, and the center of gravity of the transaction price is slightly lower than that before the eleventh section. By the end of this week, the price of SMM refined indium is 1050-1100 yuan / kg, the average price is unchanged from last week. 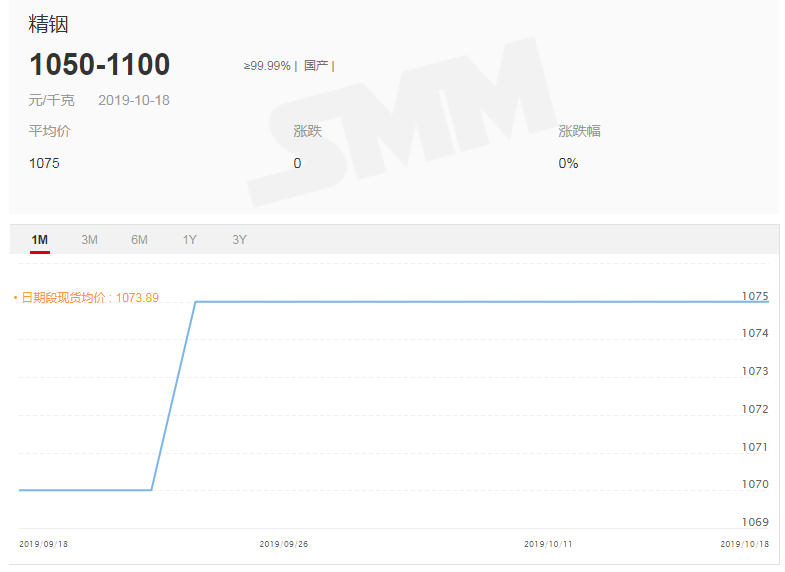 "View the exclusive historical price of indium at SMM

Although suppliers have tried to push prices and cherish the sale to change the current weak situation of indium market, but at present, the degree of unity of the supply market is not enough to change the embarrassing situation of indium market in the short term. On the one hand, although the current price of crude indium is strong, it only plays a stable role, so it is difficult to make the price of refined indium supported by effective cost. On the other hand, market participants revealed that due to some suppliers in the southern region inventory pressure to realize the demand highlighted, the recent increase in willingness to ship, so that the already inactive demand added to the wait-and-see mood. Due to the recent public auction of gallium, germanium, selenium and tellurium in Pan Asia, the market has aroused interest in the news of indium auction and increased all kinds of speculation in the market. In the short term, the indium market is expected to continue to brew in a wait-and-see direction, and it is expected that it will be difficult to make a breakthrough in the short term.

Kunming Rongke won auction for 3,609 mt Fanya indium stockpile with 2.85 billion yuan bid
The winning bid, which was also the starting price for the auction, worked out to a price of 790 yuan/kg