1. Trump: China-US economic and trade consultations have achieved substantial results in the first phase, and are "very close" to the end of the trade war.

3. Anhui: more than 90% of the start rate of indemnificatory housing projects by the end of September 198100 sets of new construction

On October 12, Anhui Province held a key work site scheduling meeting for the third quarter of urban construction in Anhui Province. It was learned at the meeting that the indemnificatory apartment housing project in Anhui Province was progressing smoothly. As of September 30, 198100 new sets of indemnificatory housing projects had been completed in the province, with a starting rate of 92.36 percent. With regard to the renovation of old residential areas, as of September 30, all the 523 old residential areas listed in the Minsheng Project Plan for renovation this year have all been started.

Passenger Federation: China's broad passenger car retail sales in September were 1.81 million units, down 6.6% from a year earlier, the third consecutive month of decline. In September this year, terminal demand gradually recovered, and the trend of stabilizing was lower than expected, forming a phenomenon that Jin Jiu was not strong.

two。 The proportion of real estate trusts is less than 15% for the first time after the year.

Shanghai News: from the perspective of trust funds, the proportion of funds invested in the real estate industry has gradually declined. Of the new volume in September, the amount of money raised in real estate fell by 32.08% month-on-month, and the proportion fell by 3.02% to fourth place. Its proportion has declined for the third month in a row, accounting for less than 15% for the first time in eight months. At the same time, recently, banks, trusts and other frequent fines have been issued, the reasons for violations are related to the inflow of funds into the property market. In the first three quarters, the number of "house-related" fines exceeded 120, with a fine of more than 100 million yuan. People familiar with the matter said that curbing the tendency of real estate financialization bubble has always been the focus of the Banking and Insurance Regulatory Commission, and the banking fund violation "blood transfusion" of the property market is the focus of investigation and punishment by regulators. 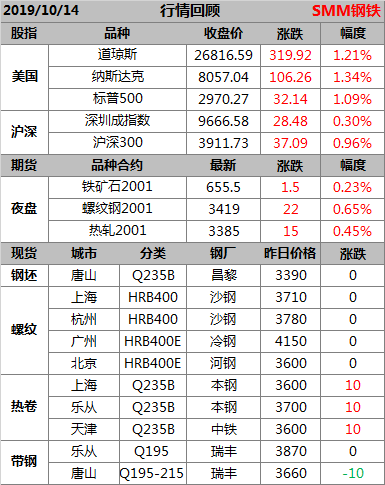 MOST POPULAR
data analysis
1.Macro Roundup (Sep 9)
smm insight
2.SMM China Steel Scrap & EAF Weekly — Keeping you in touch with the Chinese ferrous metals markets
data analysis
3.Macro Roundup (Sep 11)
data analysis
4.Macro Roundup (Sep 10)
data analysis
5.BF operating rates at Chinese steelmakers fell for three weeks in a row
China Metals Market
Privacy policyCompliance CentreSMM Credit ServiceContact UsAbout UsTerms & ConditionsSitemap
Notice: By accessing this site you agree that you will not copy or reproduce any part of its contents (including, but not limited to, single prices, graphs or news content) in any form or for any purpose whatsoever without the prior written consent of the publisher.