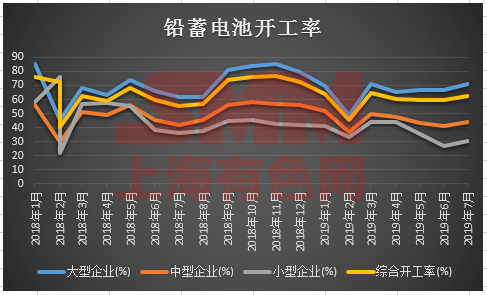 First, the new national standard for electric bicycles was officially implemented on April 15, 2019, affecting the operating rate of storage enterprises in the first half of the year.

On the other hand, storage enterprises on the battery "lightweight" is gradually in the transition, "lightweight" battery synchronous production, and non-standard car sales stores closed more, affecting dealers battery sales. In addition, consumers' recognition of the "new standard car" is relatively low, and there has been no significant improvement in the consumer market for the time being, dragging down the weakness of the battery.

Second, the terminal consumer market is weak, resulting in a decline in the operating rate. From 2017 to 2018, annual car sales fell from 29.12 million to 28.08 million, a negative growth rate of-3.6 per cent. The auto industry remained weak until 2019, mainly because of the impact of some policies.

The introduction of license and purchase restrictions in first-and second-tier cities in 2018 has also affected car sales to some extent.

According to statistics, at present, more than 95% of the prefecture-level cities in the country are implementing policies to restrict relocation to varying degrees. The restriction policy of second-hand cars has affected the circulation of second-hand cars. The poor circulation of used cars has affected the sales of new cars. In addition to the impact of national policies, the economic downturn is also an important reason for the decline in car production and sales.

Third, the plummeting price of lead, strong risk aversion in the industry, so the consumer market is still not optimistic.

According to SMM research, from July 2018 lead prices as high as 20740 yuan / ton, lead prices have been showing a downward trend. In July 2019, the price of lead plummeted to 15660 yuan per ton, the lowest point thought to be the lowest in 2018. The price of lead continues to plummet, resulting in the production enthusiasm of lead battery enterprises is not high, and the start of lead battery is cautious. Although the impact of the Spring Festival holiday ended, the operating rate in March rebounded, but it was still 0.36% lower than in March 2018, and due to long periods of rainy weather in the south of the Yangtze River from March to April, the inventory digestion of dealers was slow, and the operating rate was still poor.

Until mid-July, the price of electric bicycle batteries rose for the first time in 2019, and the market saw it as a sign of improvement in consumption. Lead prices gradually improved, stimulating the purchasing enthusiasm of dealers, and the operating rate of battery enterprises also picked up. And because the electric battery enterprise is the largest lead consumption plate in the battery, the battery operating rate showed an upward trend in July.

Overall, although the lead-acid battery operating rate began to rise in July 2019, there has been no significant improvement in the end consumer market. Looking forward to the future, it is expected that the growth of demand for automobiles, communications, electric bicycles and new energy storage will promote the steady growth of China's lead-acid battery industry.