CST
translation
Source:SMM
The foreign exchange market is actually a seesaw made up of one economy and another. Through the exchange rate support axis, the two economies are effectively linked together. Like the seesaw, the seesaw balance is determined by the weight of the two people on the opposite side of the seesaw. Therefore, the game is also between these two people.

The foreign exchange market is actually a seesaw made up of one economy and another. Through the exchange rate support axis, the two economies are effectively linked together. Like the seesaw, the seesaw balance is determined by the weight of the two people on the opposite side of the seesaw. Therefore, the game is also between these two people.

When everyone finds that they can control the seesaw balance in the hands of themselves and the person opposite them. The game begins: when there is no way to gain weight by eating (innovation), everyone wants to gain weight by drinking water (issuing money) in order to gain more initiative in the seesaw game. Because a properly low exchange rate means more exports, more jobs and better economic prospects.

That's why we're seeing major central banks around the world releasing water. Driven by the most direct of these, global negative yield debt is at an all-time high of more than $13 trillion.

The unprecedented size of negative-yield bonds has left some money nowhere to go. For oversized funds (over tens of billions of dollars), unless you buy negative-yielding Treasuries and wait for the central bank and others to buy further (fool's game), you can only stay away from the bond market to buy private equity, safe-haven gold. This is by far the simplest and most direct logic of global financial markets.

That is why, at a time when global bond yields are hitting record lows, the Fed and the ECB are planning to cut interest rates further and implement asset purchases for quantitative easing (QE). Because of the lack of momentum for further economic growth, European and American economies can only continue to release water, trying to cushion the riverbed to avoid floods burst, the end result can only be in vain.

Recently, we know that Fed Chairman Powell said in his semi-annual testimony that inflation in the United States has been curbed, business investment has slowed, and government debt remains high, which may be reasons for the Fed to further ease monetary policy. As a result, the Fed will take "appropriate" action to sustain US economic growth, and many members saw at the FOMC meeting in June that there was reason to relax policy to some extent.

We also see that the latest monetary policy minutes released by the ECB show that the ECB delayed raising interest rates by at least a year at its meeting on June 5-6. ECB President Draghi stressed that the ECB is likely to take more stimulus measures in the coming weeks, and last month reached a "broad consensus" on this issue, and cut interest rates and adjust policy guidelines. Even the introduction of a new asset purchase programme (tiered interest rate programme) is on the agenda. There is a general consensus among policymakers that, given the increased uncertainty and likely to continue further in the future, the ECB governing Council needs to be prepared to further relax its monetary policy position.

So, we see the U. S. stock market continue to hit record highs, so we see global central banks buying gold, gold ETF is sought after by a lot of money. Because there is no way out of these funds.

The latest figures show that global gold ETF rose 15 per cent in June, the biggest monthly increase in seven years. Global gold ETF positions rose sharply to 2548 tons in June, an increase of 127 tons, equivalent to a net inflow of $5.5 billion, to $115 billion. The main drivers are rising geopolitical uncertainty (Brexit, anti-globalisation) and signals from global central banks of loose monetary policy.

Net purchases by central banks of more than 1 tonne or more reached 35.8t in May, bringing global net central bank purchases to 247.3 tonnes so far this year, up 73 per cent from the same period last year. Since no central bank sells gold, total purchases-the total increase in central bank gold reserves this month-are net purchases.

It is also based on these ideas that we see the trend of the dollar index in the first half of 2019: 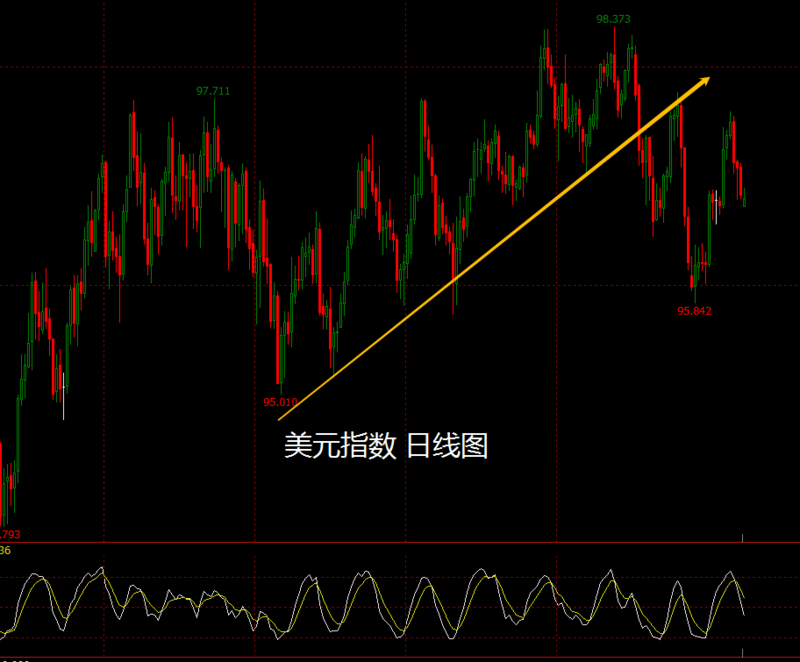 (the "perfect" match between the dollar index and the volatility index)

Because, the game does not have the clear direction, also temporarily cannot see who can win. So we see money moving slowly and convulsively towards the dollar zone. The reason is simple: Japan and Europe have a low interest rate monetary policy, so these funds can borrow euros and yen at low interest rates in exchange for high interest rate dollar arbitrage. After swapping into dollars, further choose dollar assets, stocks, real estate, or bonds. As to why it did not flow to commodity currencies such as the Australian dollar and the New Zealand dollar, as everyone has seen in the current economic situation, it is unlikely to bet on a bull market in short supply of goods.

Of course, this game will continue until one side wins. At present, we do not know the conclusion of who wins and who loses, except that there is a legend in the market that does not go against the Federal Reserve. So, for some time to come, we will also see the dollar index move very much like a volatile indicator.

CST
industry news
Gold Wins With Either A Trump Or Clinton Victory – Analyst
The U.S. presidential election is in its final leg and one gold analyst says that either a Democratic or Republican win will be positive for gold.