On the data side, API crude stocks moved (10,000 barrels) in the week ended June 28, and the number of inventories affected the prices of refined oil products that could have an impact on inflation and other economic impacts. The prices of crude oil and refined oil will have an important impact on the economy of the United States, a major consumer of the product, and on the Canadian dollar, the currency of Canada, a major exporter of crude oil.

The number of initial jobless claims in the United States in the week ended June 29 (10,000), because the data are released every week, is the focus of the investment market, the sharp increase in unemployment, the U. S. government's fiscal pressure will also increase, for the "double deficit disease" of the U. S. economy is also a test, bad for the dollar.

The June ISM non-manufacturing PMI is a leading indicator of whether the economy is healthy or not. Businesses can respond quickly to market conditions. Purchasing managers' views on the economic situation of their companies are perhaps the most timely and relevant.

The monthly rate of factory orders in the United States in May (%), because the statistics include defense sector supplies and transport sector supplies, which are high-priced products, changes in the data of these two sectors have a great impact on the overall data, so the market also pays more attention to the changes in the data after deducting the supplies of the defense sector and the transportation sector. Overall, if the data grew, it would indicate an improvement in the manufacturing sector, which was good for the country's currency. A decline, on the other hand, would indicate a contraction in the manufacturing sector, which is bad for the country's currency. The market generally attaches the most importance to the U. S. durable goods order index.

The final monthly rate of durable goods orders in the United States in May (%) is the leading indicator of production, and the listing of orders means an increase in manufacturing activity, which is good for the dollar.

The change in EIA crude oil stocks (10,000 barrels) in the week ended June 28 in the United States is a US indicator. The increase or decrease in inventories will affect the price of crude oil, which in turn will have an impact on the Canadian dollar, because Canadian crude oil exports account for a large proportion of the economy. The impact is greater than the American Petroleum Institute's weekly crude oil inventory changes. 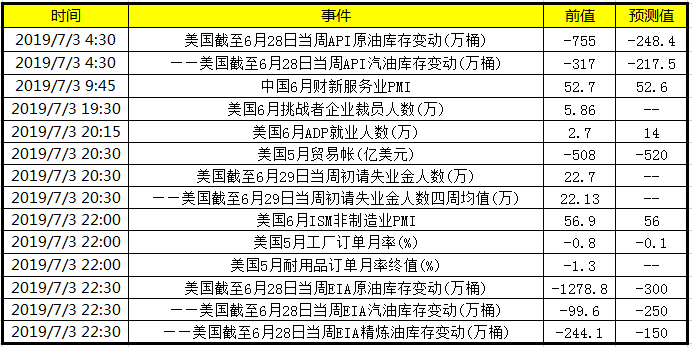