The final products of lithium battery material industry are widely used in digital electronic products such as smartphones, tablets, laptops, wearable smart devices, mobile power supplies and so on. New energy vehicles, electric bicycles, low-speed electric vehicles and other power application terminals, as well as power tools, mobile base stations, power grid energy storage, household energy storage and other energy storage fields. With the slowing down of the market growth of consumer electronics, consumer lithium batteries have entered a period of low growth and stable development. At the same time, with the strong support of various countries, the electric vehicle market has developed rapidly, encouraged by government subsidies and the power battery technology has gradually matured, and the power lithium battery has entered a period of high-speed growth. It has become the most important force driving the development of the global lithium battery industry. However, the energy storage battery is still in the market introduction stage due to technical, policy and other reasons, compared with the development of power battery is relatively lagging behind, but under the premise of rapid development of electric vehicles, according to the forecast of China Auto Research, by 2020, The accumulative scrapping amount of electric vehicle power battery in China will reach 170000 tons, and the cascade utilization of power battery will gradually become a hot spot. with the improvement of technology and the reduction of cost, it is expected to further open up the application space of energy storage.

Shanshan Co., Ltd. began to enter the lithium battery material industry in 1999, benefiting from the rapid growth of the downstream terminal industry. after nearly 20 years of development, the company has become a leading enterprise in the lithium battery material industry. According to the annual competitive brand list of China's lithium battery industry chain released by EVTank, China Battery Network, Ivy think Tank, Zhongguancun New Battery Technology Innovation Alliance, Battery 100 people's Association, and I love Electric car Network, The company's cathode materials topped the list for the fourth year in a row, anode materials topped the list for the first time in 2017, and electrolytes ranked fourth.

During 2017, thanks to the "double points" policy of the "parallel Management method for the average fuel consumption of passenger car Enterprises and the points of New Energy vehicles," new energy passenger cars ushered in an opportunity for development and significantly increased production and sales. The company's new energy passenger car PACK business will usher in a good opportunity for development. However, trapped by the requirement of "30,000 kilometers" in the 2017 Circular on adjusting the Financial subsidy Policy for the Promotion and Application of New Energy vehicles, the production and sales of new energy commercial vehicles have been affected to a certain extent, especially commuting new energy buses, and the market sales have been dismal. The company's new energy commercial vehicle business has been affected to a certain extent; However, in 2018, the state will reduce the requirement of "30,000 km" to "20,000 km", which will be conducive to the recovery of new energy dedicated vehicles and passenger car business. The state has issued a 2018 new energy subsidy policy, which highlights parameters such as high energy density and long mileage, increases the technical requirements for new energy vehicles, and increases the pressure on new energy car companies to reduce costs.

A series of national policies have been issued to ensure the healthy development of the new energy vehicle industry. the retreat of subsidies will continue to force the improvement of technology and the decline of costs. according to the China Automobile Association, the sales of new energy vehicles will exceed 1 million in 2018. Will continue to grow at a high rate.

The main products and applications of Shanshan shares lithium battery materials business are as follows: 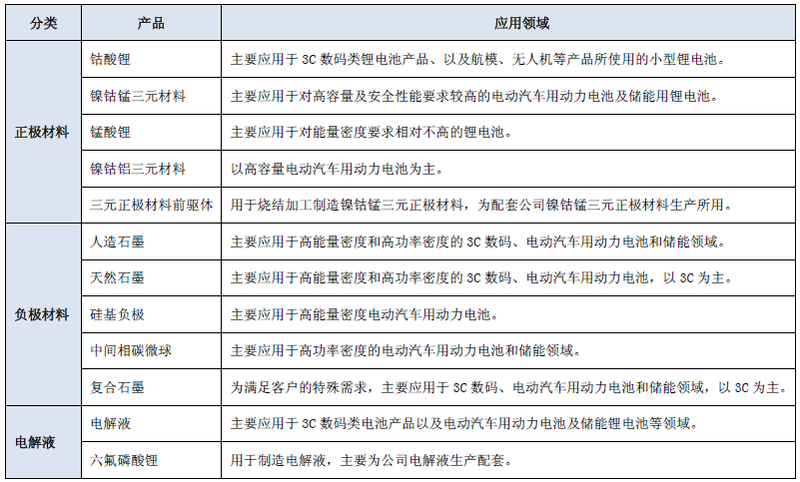 The new energy vehicle battery system integration business is mainly to integrate the single cell into a module according to the positioning and performance requirements of the vehicle product. Then according to the vehicle type and performance requirements to design thermal management, structural parts and electrical management system and other components assembled into a battery system, after inspection, by the vehicle manufacturing enterprises loaded on the electric vehicle, to provide energy power for the electric vehicle. The company's cylindrical battery PACK production line, positioned in the new energy special vehicle, urban low-speed vehicle market; square battery PACK production line, positioned in the new energy passenger car, new energy non-road industrial vehicle market.

The company's vehicle business is mainly for the establishment of new energy passenger cars and special vehicles vehicle technology research and development platform, It forms the core technology and competitiveness in the aspects of vehicle power system matching and optimization, vehicle modeling design, vehicle system integration and vehicle performance test and calibration, and provides technical support for the operation of the company's new energy vehicles.

Key accounting data and financial indicators for the past three years: 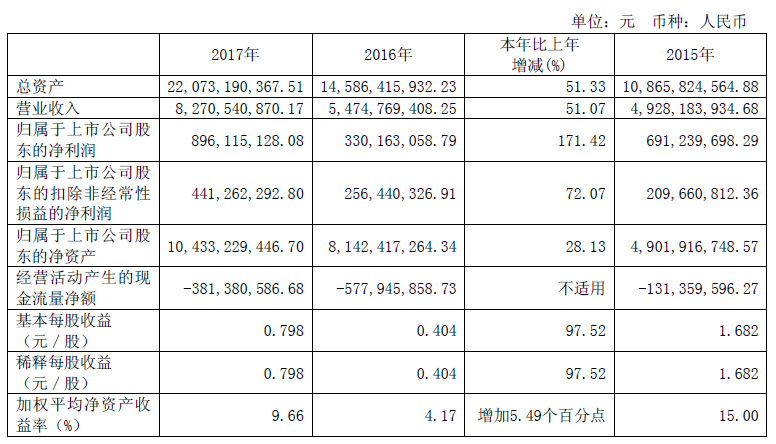