Gold closed strongly higher on Friday. Based on the most active August 2017 futures contract, gold closed at $1254.00, up ten dollars.   What jumps out as being a little different than other up day's this week is that Friday’s upside move is a combination of roughly equal parts weak U.S. dollar and strong buying in the market.

Although the dollar has been under immense pressure for the better part of this month, last week has resulted in almost a 2 ½% decline in the dollar index value.

Much of Friday’s move is based upon the belief that there is turmoil in Washington, specifically in President Trump’s administration and staff. In an interview with MarketWatch, Naeem Aslam, chief market analyst at ThinkMarkets U.K. said, “U.S. President Donald Trump’s team falling apart and the investigation about Russian involvement [in the election] are the reasons for the steeper climb in gold prices Friday.” 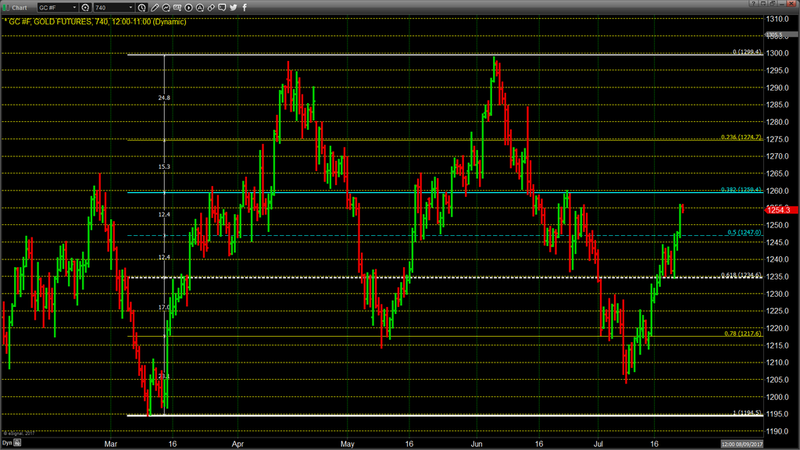 Besides the current Russian investigation, the current administration has been absolutely bogged down, and as of yet has not been able to deliver on key campaign promises. A perfect example of this was health care reform, which was left in the dust as this current administration, along with his Republican counterparts, were unable to come up with the “Replace” component of their plan to repeal and replace Obamacare.

As such, this brings into question whether or not this current administration has the wherewithal to initiate the sweeping tax cuts he proposed during his election campaign, as well as any large infrastructure programs that he had planned.

Whether the cracks are beginning to form in this current administration or this administration can somehow quickly put together the necessary components to actualize the vast campaign pledges is unknown. What is known is that currently this administration is bogged down by challenges resulting from the impending Russian collusion investigation. This has dampened the real possibility of dramatic change that would come from the sweeping proposals laid out by candidate Trump last year.

This Analysts Warns Gold Bears To Watch Out
Gold prices are recovering from post-jobs weakness and one analyst says the markets might have “overreacted” to the economic data point.

U.K. Bans Paying Wages In Gold In Attempt To Curb Tax Evasion
It is no longer legal for employers to pay salaries in gold bullion, ruled an expert tax avoidance panel in the U.K.

Central bank Gold demand up 20% y/y during Q2, but overall pace remain restrained
Central bank net purchases totaled 94.5 ton during the second quarter od thia year, 20% higher than the same quarter of 2016 but below the 5-year average of 135.2t.

Samsung to reduce waste by retrieving Gold, Silver from banned Galaxy note 7
Samsung is planing to retrieve Gold and other metal from the phone in order to reduce waste.

Look for Silver gains on short
Mitsubishi sees potential for silver to bounce as traders with short, or bearish, positions buy in order to cover them.

Gold Awaits Economic Data
Metals higher ahead of a spate of U.S. economic news today. U.S. CPI and retail sales numbers will be closely analyzed for signs of continuing growth in the U.S. economy and for signals on inflation.