For the third day in a row, gold closed sharply higher today. Gold prices have risen six out of the last seven trading days when considering the incremental upside gains seen early last week. Today’s gains were mostly dollar weakness with a small percentage of the gains attributable to buying.

As of 4:00 EDT, most active August gold futures is trading at $1241.30, up $7.60 on the day for a net gain of 0.61%. However, on closer inspection, it is dollar weakness that provided much of today’s gains. According to the Kitco Gold Index (KGX), spot gold is currently trading up $7.70. That gain is composed primarily of dollar weakness, which accounts for a $6.50 gain on the day, with the remaining $1.20 attributable to regular buying in the market. 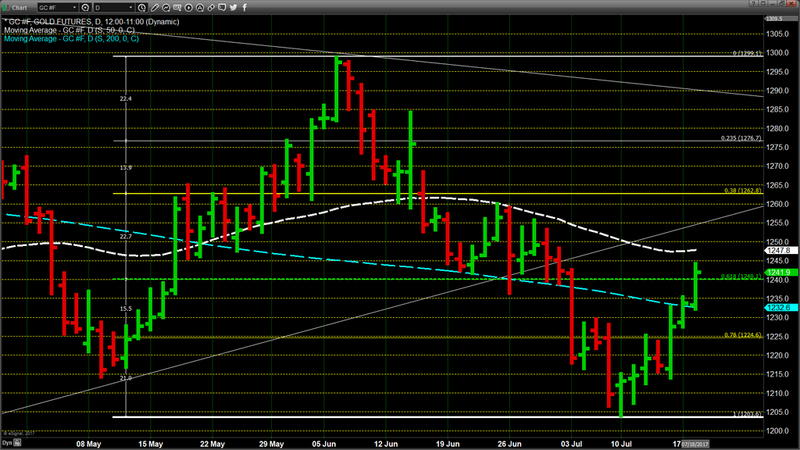 The U.S. dollar continues to trade under pressure, losing roughly 2% of value this month alone. Half of that decline this month occurred over the last three trading days, with a loss of roughly a half a percent today alone. This takes the U.S. dollar to an 11-month low.

Failure of the U.S. Senate and administration to pass its health care reform bill has been cited as one of the primary events affecting dollar value today. Recent weakness occurred as a direct result of market sentiment which has been affected by the more dovish tone of the Federal Reserve recently.

In an interview with Bloomberg Markets Rodrigo Catril, a currency strategist at National Australia Bank Ltd. in Sydney said, “Any hopes of dollar support from a successful vote on the Senate’s health-care bill look to be vanishing. Near term, the dollar path of least resistance is down. We still think the data - inflation in particular -- will provide the Fed with enough ammunition to hike in December and boost the dollar, but this is a fourth-quarter story.”

Today’s U.S. dollar decline was in direct result to the inability of Republican lawmakers to repeal and replace Obama care. A bigger question emerges as to the likelihood of this current administration to implement campaign pledges and promises.

Recent advances in U.S. equities, referred to as the “Trump rally,” have been predicated on the assumption that this administration would implement tax reform, massive infrastructure projects, and other measures to jump start pro-business initiatives. This has since been brought into question.

It is the promise that the current administration’s campaign pledges would be implemented that has fueled the record highs that U.S. equities have moved to. If these pledges become hollow and the optimism fades, U.S. equities would absolutely suffer.

This Analysts Warns Gold Bears To Watch Out
Gold prices are recovering from post-jobs weakness and one analyst says the markets might have “overreacted” to the economic data point.

U.K. Bans Paying Wages In Gold In Attempt To Curb Tax Evasion
It is no longer legal for employers to pay salaries in gold bullion, ruled an expert tax avoidance panel in the U.K.

Central bank Gold demand up 20% y/y during Q2, but overall pace remain restrained
Central bank net purchases totaled 94.5 ton during the second quarter od thia year, 20% higher than the same quarter of 2016 but below the 5-year average of 135.2t.

Samsung to reduce waste by retrieving Gold, Silver from banned Galaxy note 7
Samsung is planing to retrieve Gold and other metal from the phone in order to reduce waste.

Look for Silver gains on short
Mitsubishi sees potential for silver to bounce as traders with short, or bearish, positions buy in order to cover them.

Gold Awaits Economic Data
Metals higher ahead of a spate of U.S. economic news today. U.S. CPI and retail sales numbers will be closely analyzed for signs of continuing growth in the U.S. economy and for signals on inflation.