Gold is still attempting a recovery from the dramatic price drop on Monday when a single sell order of 1.8 million ounces rattled the markets. Trading fractionally higher over the last two days, gold prices have slowly moved up from the intraday lows of $1236.00 achieved during that single sell order placed at the opening of trading in London on Monday morning.

If not for the weak U.S. dollar, gold prices, in fact, would have traded lower over the last two days. As of 4 o’clock EDT, physical gold is trading $3.20 higher, currently fixed at $1249.90. However, just as yesterday, on closer examination it is dollar weakness which provided the upside move in gold today. Dollar weakness has added $6.10 of value per ounce of gold, and selling pressure has resulted in a -$2.90 drawdown. 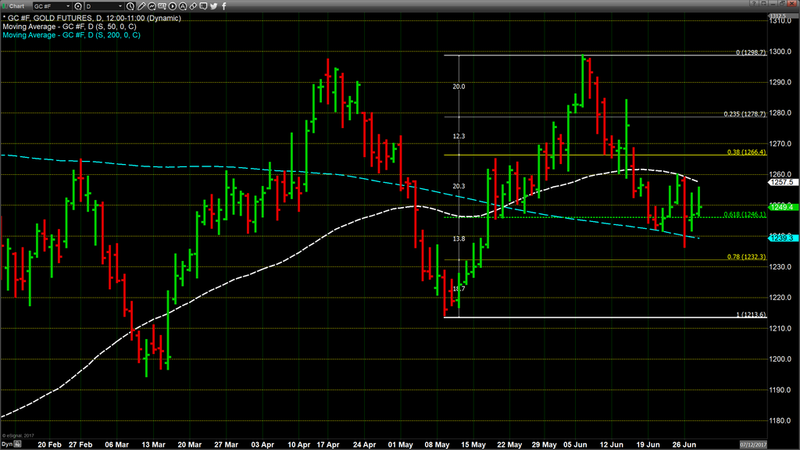 Gold also had to compete with U.S. equities, which today staged a rally ending the lower pricing exhibited on Monday and Tuesday of this week. This, along with higher treasury yields, seemed to dampen any major upside move in the precious metals.

Given the outside forces currently in play, globally gold prices have held current support levels. In an interview with MarketWatch, Lukman Otunuga, research analyst at FXTM, said, “Gold is likely to remain supported “with the ongoing uncertainty of Brexit [the U.K.’s split with the European Union trading bloc], political risk in Washington and jitters from depressed oil accelerating the flight to safety.”

There are obviously multiple market forces creating a “tug-of-war” scenario for gold pricing. According to Georgette Boele, a currency and precious metals analyst at ABN Amro, “On the one hand, a lower U.S. dollar and lower equity markets are supportive for gold prices. On the other hand, the modest rise in U.S. real yields and expectations of less accommodative monetary policies ahead are negative forces for gold, as investors will find gold less attractive as investment asset because gold does not pay interest.”

In an interview with Bloomberg News, Bob Iaccino of Path Trading Partners relayed his conviction that given the strength of the global economy and global equities markets gold pricing is holding up rather well and should, in fact, be trading lower than it currently is. He believes current bullish sentiment is a reflection of the underlying concern for the “undertones of the White House,” as well as current geopolitical time bombs (Syria and North Korea).

Regardless of the underlying pressures that intrinsically exist in gold pricing, market participants continue to be supportive of the precious yellow metal, with a net result of stable gold prices, which are still recovering from Monday’s large sell order.