CST
industry news
Source:Kitco
Spot gold popped higher in overnight trading. The gains are partly attributed to a "sell the rumor, buy the fact" type of bounce on news that Emmanuel Macron will win the French presidency.

(Kitco News) - Spot gold popped higher in overnight trading. The gains are partly attributed to a "sell the rumor, buy the fact" type of bounce on news that Emmanuel Macron beat back far-right nationalist Marine Le Pen to win the French presidency.

European markets are breathing a sigh of relief that for now that France is expected to remain in the European Union, which triggered a risk-off type of trade in equities there. The gold market had been selling off leading up into the French election as polls revealed Macron as the expected winner. Monday's overnight gains were a "buy the fact" type of rebound.

What's next for gold?

The recent deterioration in the short-term trend, means gold bulls are swimming upstream right now. The burden is on gold bulls to generate fresh momentum and follow-through buying to improve the short-term outlook. A potential bullish outside day is forming on the daily chart early on Monday. But, a settlement in the upper third of the daily range would be needed to confirm that.

Key resistance: The 60-minute chart reveals initial resistance at $1,241.70. A sustained rally above that level would be needed to give gold bulls short-term confidence.

New support: On the downside, Monday's early low at $1,221.00 has become initial support for gold. Watch to see if that zone and the developing bullish outside day can act as a hook to stabilize the recent downtrend. If that fails, gold bears will eye a retest of the March 10 swing low at $1,198.00, marked at Point A on the chart.

Bottom line: The short-term trend bias is negative for gold. There is potential for gold bulls to build on the developing bullish outside day. But, there is more work to be done on the upside before the "All Clear" sign rings for gold bulls. 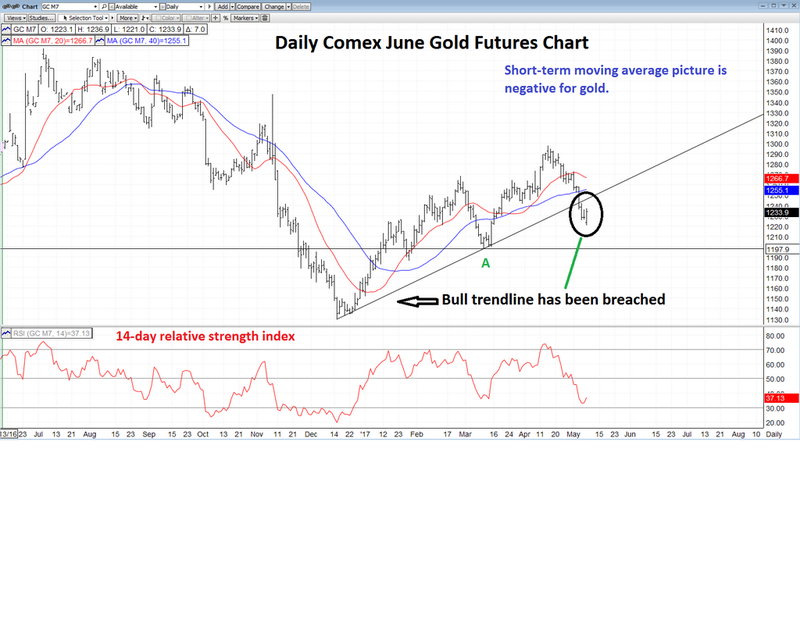