Though U.S. prices dipped slightly, China’s Boasteel announced a price hike for GOES close to $40 per metric ton, according to a recent TEX Report. Although the Chinese have led recent GOES and other steel product price hikes, others have not necessarily followed. Nevertheless, Chinese steel prices set the floor for global steel prices.

Now that the Trump administration has begun to settle in, market observers have paid close attention to trade actions within the metals industry, particularly the cold-rolled coil circumvention case and most recently a case filed by the Aluminum Association against China involving aluminum foil. Both the domestic steel and aluminum industries have pursued trade cases to address overcapacity concerns.

GOES markets follow some of these same patterns. Back in 2013, GOES from China accounted for about 10% of total U.S. GOES imports (by tonnage). Clearly, the trade cases filed by the domestic producers at the time limited Chinese imports, but that trade case sought to stop other countries’ imports as much as China’s.

Herein lies a big difference between the GOES case and the aluminum case as well as the prior flat-rolled product steel cases. The GOES trade case did not result in any finding of injury, so no anti-dumping and countervailing duties were assessed. Instead, domestic power equipment manufacturers shifted their global supply chains to source GOES globally and purchase transformer parts and wound cores from NAFTA countries.

Some have speculated that two years ago, the addition of two new harmonized tariff codes for both transformer parts (8504.90.9546) and wound cores (8504.90.9542) would set the stage for future trade cases brought by the lone domestic GOES producer. We think this looks like a “stretch” and, legally, we’re not even sure there is a case to be had as AK Steel currently does not manufacture transformer parts or wound cores.

Import volumes for wound cores have modestly increased, but imports for transformer parts have actually declined: 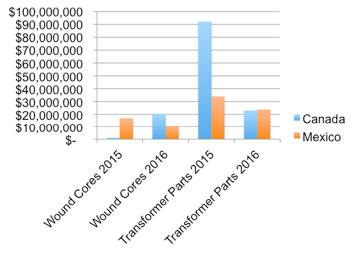 Renewables MMI: California Utilities Try to Shift to Solar Storage… Tesla’s Helping
We have long lamented that while solar energy production is a mature generation technology that should be used in nearly the entire U.S..

Aluminum MMI Jumps 6% To New Highs, Prices Breaking Resistance
In January, aluminum prices broke through the $1,800 per metric ton level. That was an important development signaling that bulls are taking over. Just a month ago we pointed out that prices had upsid

US Confirms 250% Tariffs on Chinese CTL Steel Plate
The Commerce Department made final determinations today in its anti-dumping and countervailing duty investigations of carbon and alloy steel cut-to-length (CTL) plate from China.

January MMI: Profits Are Being Taken in the Metals Bull Market
Our January MMI report saw almost universal price pull backs in December, but that’s to be expected in a bull market with active investors.

Part of Aluminum Stockpile Seized; US Opens WTO Case Against Chinese Aluminum
U.S. customs officials have seized $25 million worth of aluminum linked to a Chinese billionaire accused of stockpiling the metal across the world, the Wall Street Journal reported this morning.

The Future EU: Donald Trump’s Not Alone in Eschewing Free Trade
There are many in the business community who share a sense of anxiety as to what trade policies the new administration of President-elect Donald Trump will introduce in the year ahead.

Stainless MMI Down, Price Volatility Ahead
Our Stainless MMI fell by two points in December after a mixed performance.