The operating rates of primary aluminium alloy enterprises were acceptable while some enterprises reduced the production due to the poor orders. A few secondary aluminium alloy enterprises took holidays in advance due to the poor orders and the pandemic while most of the secondary aluminium alloy enterprises planned to stop the production since January 10. The restocking of most enterprises was about to end and the delivery time of new orders is concentrated at the end of January or early February. The average operating rate of silicone enterprises stabilised around 74% this week as some monomer factories purchased in the form of small orders. The mainstream prices of DMC remained at 16,600 yuan/mt amid the overcapacity of silicone. The operating rates of polysilicon enterprises remained high. The prices of dense polysilicon fell to 150-165 yuan/kg, a decrease of 136 yuan/kg or 46% from December 5. The increasing silicon powder orders placed by polysilicon enterprises did not boost the transactions of silicon metal lump as the silicon powder plants had abundant silicon metal lump inventory and held a bearish outlook on the follow-up market. The demand for silicon metal from polysilicon enterprises will remain strong in the medium and long term as they have no production suspension or reduction plan in the short term amid the lucrative profits.

Some cargo holders, especially those in north China, still sold off their goods at low prices to ease the inventory pressure and withdraw funds before the Chinese New Year. As such, the prices of the same specification varied by 1,000 yuan/mt and the prices of metallurgical-grade low-grade silicon metal fell obviously. The silicon prices are expected to fall next week as the transactions may weaken further since January 10 amid the Chinese New Year holiday and halted logistics services. 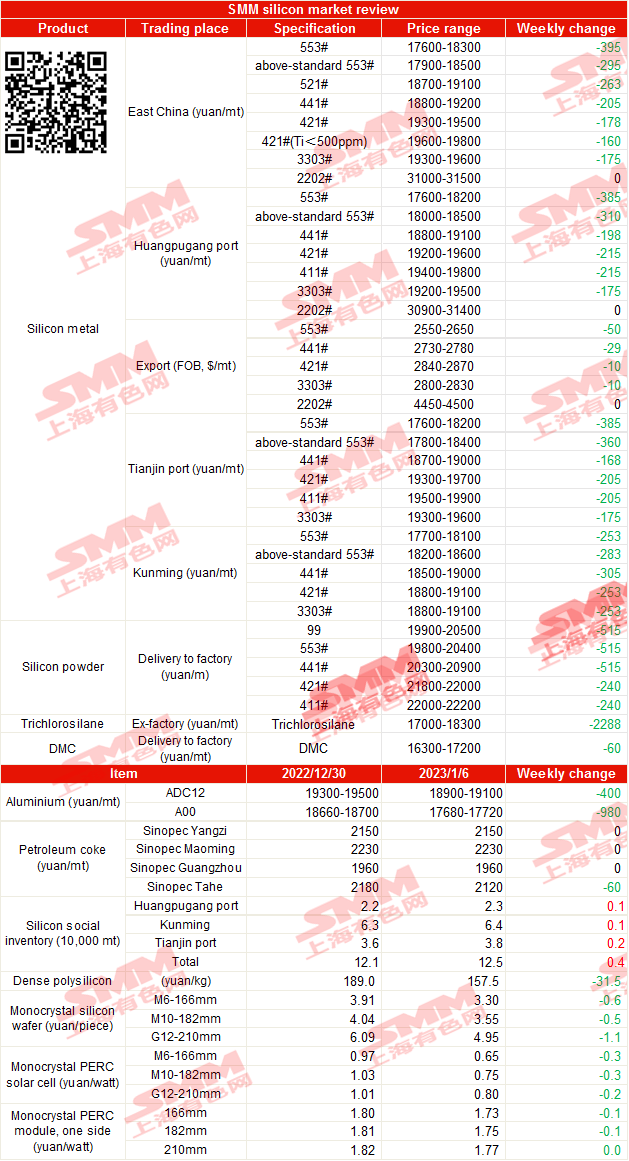