CST
Source:SMM
SMM data shows that the zinc ingot inventories across seven major markets in China totalled 132,300 mt as of August 15, down 4,300 mt from the previous week and 6,900 mt over the weekend.

SHANGHAI, Aug 15 (SMM) - SMM data shows that the zinc ingot inventories across seven major markets in China totalled 132,300 mt as of August 15, down 4,300 mt from the previous week and 6,900 mt over the weekend. In particular, in Shanghai market, the arrivals were low because some smelters had shipped zinc ingot to the downstream enterprises in other regions in advance and the local enterprises purchased less on rigid demand. As a result, the inventory in Shanghai fell slightly. The inventory in Guangdong remained relatively stable amid sluggish demand as downstream enterprises only restocked on dips. As for the Tianjin market, some smelters in Inner Mongolia have not returned to normal production, and shipments from Xinjiang were restricted due to local pandemic outbreak. Therefore, the arrivals at the market continued to stay low, and currently, the 0# zinc ingots were in acute shortage in the Tianjin market. Meanwhile, the operating rate of galvanising plants were improving, which suggested that more purchased were made on rigid demand, hence the inventory in Tianjin declined dramatically. Generally, over the weekend, inventories in Shanghai, Guangdong and Tianjin fell 7,400 mt, and inventories across seven major regions in China dropped 6,900 mt. 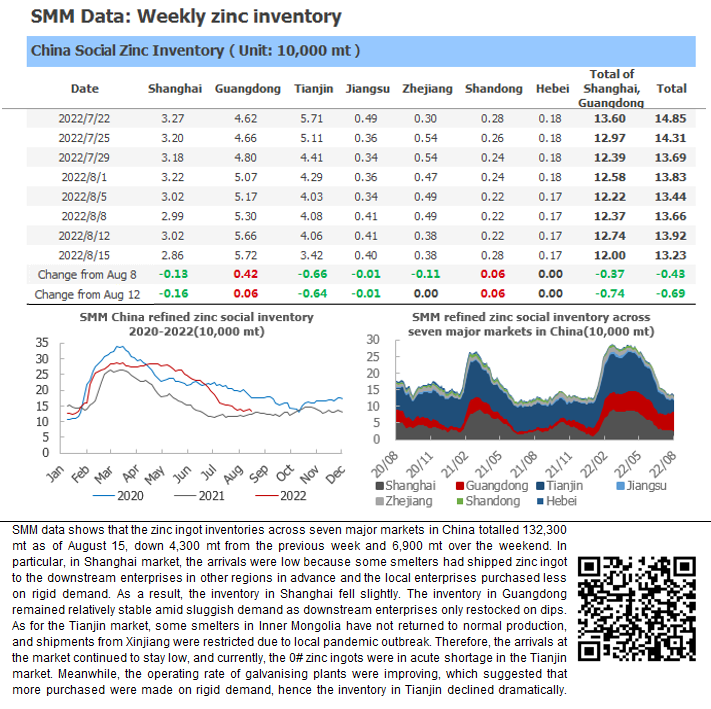