CST
Source:SMM
This is a roundup of China's metals weekly inventory as of July 29.

SHANGHAI, Jul 29 (SMM) - This is a roundup of China's metals weekly inventory as of July 29.

SMM aluminium ingot social inventory stood at 671,000 mt as of Thursday July 28, up 3,000 mt from last Thursday, and down 88,000 mt from the same period last year. The weekly inventory was stable as a whole, with different dynamics in different regions. The inventory in Gongyi dropped amid less arrivals due to delayed shipments from Xinjiang, but is likely to rise as most cargos are in transport. The inventory in Wuxi rose slightly as some local warehouses were supplemented. Transactions of spot aluminium were relatively poor with sluggish downstream demand, and the low inventory was mainly the result of low arrivals. The market shall watch the arrivals of cargos in transport at present.

Aluminium billet: SMM aluminium billet social inventory rose 12,200 mt from a week ago to 107,600 mt as of Thursday July 28. The inventory in Foshan rose significantly by 12,800 mt amid intensive arrivals of cargos shipped from Yunnan, and sluggish downstream demand also resulted in higher inventory. Huzhou saw a weekly increase of 3,000 mt as local demand remained poor. The inventory in Wuxi dropped in the past week, and is likely to accumulate next week as some cargos will arrive soon. Changzhou saw few changes. On the whole, the downstream is increasingly wait-and-see with rebounding aluminium prices, and the inventory is unlikely to fall in the near term.

SMM data shows that social inventories of zinc ingot across seven major regions in China totalled 136,900 mt as of July 29, down 11,600 mt from July 22 and 6,200 mt from July 25. The Inventory in Shanghai basically remained unchanged as downstream buyers mainly purchased on rigid demand. In Guangdong, the inventory increased slightly as downstream enterprises remained wait-and-see due to high zinc prices and high premiums. The inventory in Tianjin dropped slightly amid a small amount of arrivals as downstream enterprises purchased on dips despite of high zinc prices. Overall, inventories in Shanghai, Guangdong and Tianjin fell 5,800 mt, and inventories across seven major regions in China decreased 6,200 mt. 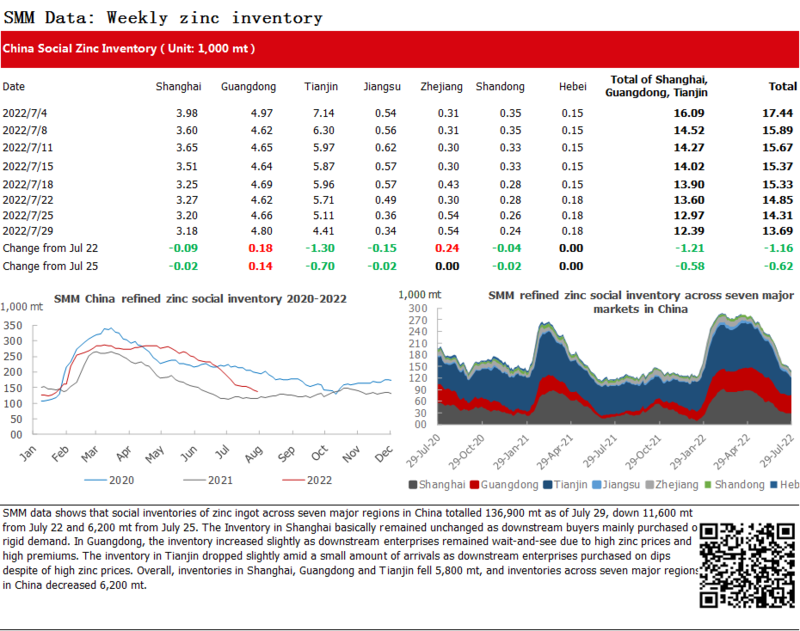 The SHFE/LME price ratio expanded this week, but due to the weak demand, the clearance volume of overseas pure nickel was less. According to SMM research, the bonded zone inventory stood at 6,300 mt this week. The inventory of nickel briquette was 2,700 mt, down 200 mt WoW, and that of nickel plate was 3,600 mt. The decrease in nickel briquette inventory this week was caused by the slightly growing demand from the ternary battery and the purchases on rigid demand from some salt plants.

As of Friday July 29, SMM copper inventory across major Chinese markets decreased by 12,400 mt from Monday to 70,600 mt, down 23,900 mt from last Friday. The weekly inventory has been declining for two consecutive weeks, and it will not rise in the short term. Compared with Monday's data, the inventories across China decreased this week. The total inventory dropped by 79,600 mt compared with the same period last year when the inventory was recorded at 150,200 mt. Among them, the inventory in Guangdong dropped by 54,600 mt, and the inventory in Shanghai dipped by 22,000 mt. The decrease in inventory this week was contributed by the drop in supply. Firstly, the amount of imported copper in all regions of China remained low. Secondly, domestic smelters were still under maintenance, and the supply did not grow.

Looking forward, some smelters will resume production next week and the customs clearance of imported copper will also increase, so the supply is expected to recover. However, the downstream consumption is expected to be better than this week. According to the SMM research, many copper rod factories will resume their production next week from maintenance. The increase in demand will be faster than that in supply, thus the weekly inventory will still fall.

Copper inventories in domestic bonded zones decreased by 10,200 mt from last Friday July 22 to 266,100 mt as of July 29, according to the SMM survey. Inventory in the Shanghai bonded zone dipped 7,800 mt to 241,700 mt, and inventory in the Guangdong bonded zone fell 2,400 mt to 24,400 mt. The improvement of the SHFE/LME price ratio and the high premiums in China boosted the demand for customs declaration. Sellers were active in finding sources of warrants and bills of lading that arrived at ports in recent days, hence the Yangshan copper premiums rebounded sharply and the demand for customs declaration grew significantly, resulting in the decline in bonded zone inventory this week. 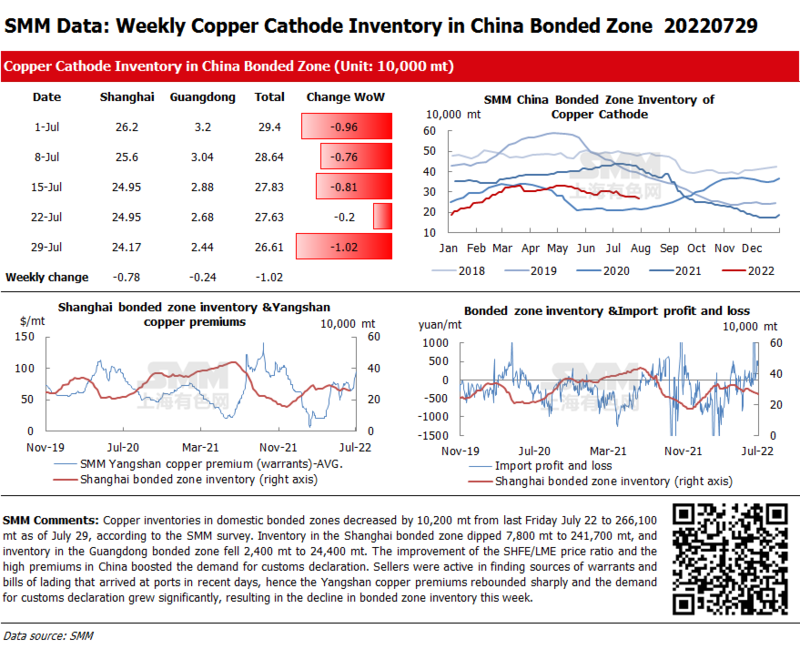 As of July 29, port inventories of nickel ore in China increased by 774,000 wmt to 6.359 million wmt compared with last week. The total Ni content stood at 50,000 mt. The port inventory of nickel ore across seven major Chinese ports stood at 3.168 million wmt, 424,000 wmt higher than last week. The nickel ore inventory grew slowly, while the inventory at Lanshan Port and Lianyungang Port rose sharply. At present, the domestic NPI market is sluggish, hence the demand for nickel ore is relatively poor, putting huge downward pressure on the ore prices. At the same time, the high ocean freight continued to squeeze the profit margin of the mines, resulting in the mines' poor willingness to ship. It is expected that the short-term port inventory of nickel ore will continue to rise slowly. Due to the insufficient upstream shipments and the poor downstream demand, the short-term port inventory and import volume of nickel ore will be lower than in the same period last year.