CST
Source:SMM
The recent coastal wind and waves at northern Chilean ports has caused an extensive delay in copper exports by Chile in January. Of several large and medium-scale ports in northern Chile that transport copper cathode and copper concentrates like Antofagasta, Mejillones, Iquique, Arica and Patache, four ports could not load copper cathode as large-scale vessels failed to call at ports, with the exception of the Antofagasta port.

SHANGHAI, Jan (Feb 1)—The recent coastal wind and waves at northern Chilean ports has caused an extensive delay in copper exports by Chile in January. Of several large and medium-scale ports in northern Chile that transport copper cathode and copper concentrates like Antofagasta, Mejillones, Iquique, Arica and Patache, four ports could not load copper cathode as large-scale vessels failed to call at ports, with the exception of the Antofagasta port. 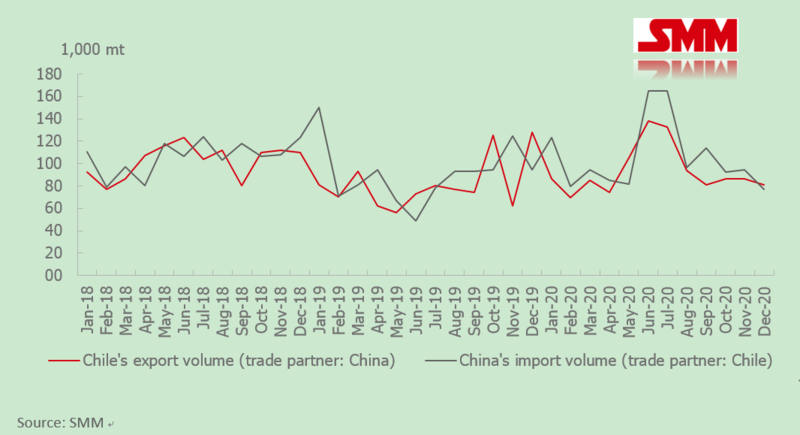 The delay of shipping schedules has affected normal trades in the foreign trade market. Transportation capacity has remained tight for an extended period due to surging exports, affected second wave of overseas COVID-19 and a backlog of cargoes piled up at overseas ports. That combined with container shortages affected arriving shipments of copper cathode. Delays in shipments from Chile have exacerbated market concerns over tighter supply. The shipping issues at Chilean ports in January will lead to lower shipments arrivals of copper cathode in February and March, which has increased pressure for some traders for deliveries of long-term contracts after Chinese New Year.

Supply tightness will intensify amid normal production resumptions after CNY should the COVID-19 pandemic be under control. Over the past two weeks, demand in the import market has concentrated on cargoes under bill of lading slated to arrive after CNY. Sellers raised their quotes despite an absence of improvement in the SHFE/LME copper price ratio. Quotes of the two high-quality brands under bill of lading has exceeded $75/mt, and trades occurred with premiums of around $73/mt. Yangshan copper premiums with a quotation period in March stood at $64-80/mt under warrants as of January 28, and between $60-73/mt under bill of lading. 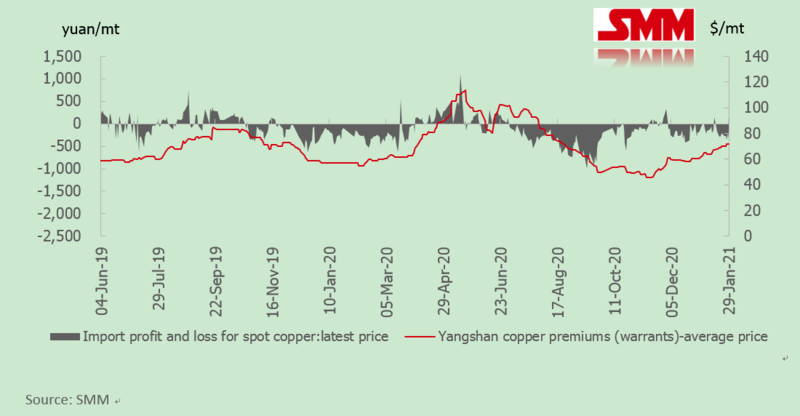 China's Exports of Manganese Products up 101.96% YoY
China’s total exports of wrought manganese, manganese products, unwrought manganese and scrap materials and powder stood at 51,958.18 mt in June, up 70.96% month on month and 101.96% year on year, according to SMM statistics.

Exclusive: China copper cathode output rose 4.71% MoM to 860,500 mt in March
An SMM survey showed that China produced 860,500 mt of copper cathode in March, rising 4.71% from February and 15.71% from a year ago, as some copper smelters recovered from maintenance and due to more operating days in the month.

All
MOST POPULAR
1.SMM Evening Comments (Oct 21): Shanghai Nonferrous Metals Mostly Fell in the Afternoon Trading as the Government Issued Guide Price for Thermal Coal
2.China Weekly Inventory Summary and Data Wrap (Oct 15)
3.SMM Evening Comments (Oct 15): Shanghai Nonferrous Metals All Closed with Big Gains amid Global Energy Crisis
4.SMM Morning Comments (Oct 20): Base Metals Closed Mostly Closed with Losses as the China Government Is Determined to Regulate Coal Prices
5.The Traded Electricity Prices in Jiangsu Moved up 19.94% in the First Day of New Electricity Tariff
Shanghai Metals Market
Privacy PolicyCompliance CentreSMM Credit ServiceContact UsAbout UsTerms & ConditionsSitemap
Notice: By accessing this site you agree that you will not copy or reproduce any part of its contents (including, but not limited to, single prices, graphs or news content) in any form or for any purpose whatsoever without the prior written consent of the publisher.