Tianneng Power has formed a product system dominated by lead battery and supplemented by lithium battery, which covers power, starting and stopping, energy storage and so on. Among them, lead-acid battery has a history of more than 160 years, with the characteristics of high safety, good resource reuse, high performance-to-price ratio, mature technology, excellent high and low temperature performance, and obvious market competitive advantage. Therefore, in the global market, lead battery occupies a dominant position in secondary batteries, and it is also the main battery for vehicles and equipment such as electric light vehicles, electric special vehicles and starting and stopping vehicles at present. The overall market demand will continue to grow steadily.

In the future, the application field of lead-acid battery will be continuously enriched and expanded, and the technology will continue to develop to high specific energy, high performance-to-price ratio and high safety. At the same time, with the in-depth application of 5G communication technology, lead battery will also move forward in the direction of intelligent, such as identifiable traceability, remote control, Internet of things and so on.

During the reporting period, the company achieved operating income of 4.066 billion yuan, down 6.1% from the same period last year, which was affected by factors such as the decline in the average price of lead, the adjustment of the company's product sales strategy and the decline in external sales of recycled lead in the first half of the year. The net profit attributed to shareholders of listed companies was 244 million yuan, down 20.40% from the same period last year. The decline in net profit was mainly due to the amortization of fixed costs and the reduction of non-recurrent income during the shutdown period of the epidemic.

During the reporting period, the company achieved remarkable results in the development of new projects. The share of Audi, SAIC GM, Kia and other supporting projects increased, and the early development projects such as Honda and Mazda were successfully introduced into mass production. Affected by these positive factors, under the circumstances of novel coronavirus's epidemic situation and the decline in automobile production and sales, the sales volume of the mainframe supporting market increased by about 1% over the same period last year. The overall supporting market share of the company increased to 48% in the first half of 2020.

During the reporting period, the company's operating income was 1.055 billion yuan, down 22.39% from the same period last year; the net profit belonging to the owner of the parent company was 31.4864 million yuan, down 62.35% from the same period. In the first quarter, the company took a variety of measures to deal with the impact of novel coronavirus's epidemic situation and actively resumed work and production. However, since the end of March 2020, the overseas epidemic has broken out rapidly, exceeding the company's management expectations. The intensification of the overseas epidemic has seriously affected the business operation of the company's overseas customers, and the shutdown of downstream customers has affected the company's contract signing and delivery. With the gradual resumption of production and logistics in the second quarter and the gradual recovery of social life, the company has actively organized production, improved after-sales service, increased product research and development, and order sales have improved month by month.

During the reporting period, the company achieved operating income of 698 million yuan, down 21.66% from the same period last year; the net profit attributed to shareholders of listed companies was 15.7893 million yuan, an increase of 11.87% over the same period last year. The main reason is that during the reporting period, due to the decrease in market demand due to novel coronavirus's epidemic situation, the company's operating income decreased; at the same time, due to stable prices of major raw materials, higher exchange rate, strengthening accounts receivable management and inventory management, strengthening cost control and other factors, the company's net profit increased year-on-year.

Generally speaking, although the performance of some lead-acid battery enterprises is not good, with the continuous introduction of policies to stimulate automobile consumption and the acceleration of the pace of resumption of business and market by the main body of the market, the consumption of residents going out has increased in an orderly manner, and the market vitality has been gradually improved. market sales continue to improve. In this context, automobile production and sales have gradually picked up and maintained a good running momentum. According to data, domestic automobile production in July was 2.201 million, an increase of 21.9% over the same period last year. In terms of car sales, car sales in July were 2.112 million, up 16.4 per cent from a year earlier. With the end of the epidemic, the domestic lead battery industry is also on the right track, the follow-up enterprise performance may show a pick-up trend as a whole. 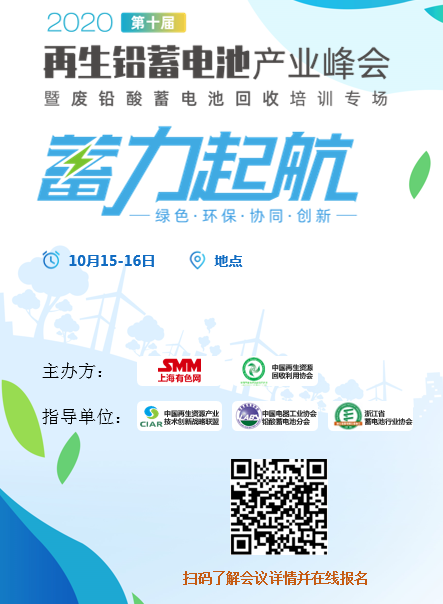 Most Read
feature
1.IMPACT ON 2020-21 WINTER PRODUCTION CUTS
data analysis
2.Exclusive: China's base metals output in September
price review forecast
3.SMM Evening Comments (Oct 16): Shanghai nonferrous metals ended mixed
price review forecast
4.SMM Morning Comments (Oct 19): Shanghai base metals traded mixed after the release of Chinese economic data
feature
5.SMM Webinar Series: China Policies Update
China Metals Market
Privacy policyCompliance CentreSMM Credit ServiceContact UsAbout UsTerms & ConditionsSitemap
Notice: By accessing this site you agree that you will not copy or reproduce any part of its contents (including, but not limited to, single prices, graphs or news content) in any form or for any purpose whatsoever without the prior written consent of the publisher.