SMM7 March 28: most of the non-ferrous metals market gave up their gains today. by the end of the day, Shanghai tin rose 2.36%, Shanghai lead rose 2.29%, Shanghai aluminum rose 0.84%, Shanghai copper fell 0.29%, Shanghai zinc fell 0.55%, Shanghai nickel fell 0.6%. This morning, all domestic non-ferrous metals were red, and Shanghai tin once rose to 6%, but around 10:30, the whole line of non-ferrous metals fell, spitting out some of the morning gains. Shanghai tin also fell back to around 2%. Recently, the tin situation in Shanghai is strong, the lower support is solid, the short sellers dare not enter the market rashly, and the bulls are advancing by leaps and bounds. The superposition of two waves last week was affected by diplomatic events and the accumulation of strength was able to break through the pressure level this week. Shanghai tin prices are now located near the Brin belt, short-term need to guard against the risk of high callback, but the overall market is still dominated by bullish forces, it is difficult to reverse for the time being.

[SMM's point of view] can you still get on the bus after the short-term rise of the US dollar and the collective fall of the Shanghai-tin roller coaster?

In terms of zinc, on the supply side, domestic zinc concentrate processing fees have rebounded at a low level, boosting the production will of smelters, and the current smelter raw material inventory level has returned to normal, averaging about a month. Overall, the supply side is expected to increase. On the consumer side, galvanizing supports the main consumption of zinc, terminal orders have improved, and follow-up attention is paid to the rush of consumption and the landing of infrastructure projects after the rainy season. On the other hand, consumption is still not improving in some areas affected by the flood. However, demand is expected to be driven by post-disaster reconstruction in the future. As overseas countries restart their economies one after another, orders for die-casting zinc alloy and zinc oxide in Southeast Asia have improved, leading to a pick-up in the operating rate of the plate. SMM believes that from a fundamental point of view, with the gradual restart of overseas economies and the superimposition of relevant national policies to stimulate infrastructure development, zinc consumption will gradually resume and future consumption can be expected, but supply-side increments restrain the rise in zinc prices, and zinc prices are expected to maintain a volatile upward trend.

[SMM Analysis] demand driven by overseas economic restart and post-disaster reconstruction is expected to fluctuate and rise in zinc prices.

In terms of black, thread fell 0.75%, hot coil fell 0.5%, stainless steel slightly fell 0.04%, coke fell 0.46%, coking coal fell 1.62%, iron ore fell 0.12%. In terms of hot rolls, the mainstream market resources are expected to arrive at 183000 tons this week, 7000 tons less than last week. This week, it is mainly in Shanghai and Lecong, while the volume of goods arriving in Tianjin is basically stable. Shanghai market: the volume of goods arriving in this market has increased steadily and slightly this week. Mainly due to the recent opening of the north-south price gap, some traders increased orders to the northern price-locking steel mills, leading to a slight increase in the volume of goods. Judging from the current fundamentals of the market, the small increase in supply is still replenishing out-of-stock specifications, and the release on the demand side is also relatively stable, so there is little contradiction in the short term. However, from the point of view of market sentiment and caution, terminal procurement and trade stocks are much more cautious than in the previous period, and fear of heights continues unabated, which significantly suppresses the current market prices. the superimposed northward movement continues to continue, and the supply gradually increases, so it is expected that subsequent spot prices will be under pressure.

Crude oil fell 1.15% in the previous period, hitting a new low in more than a week. The second spread of the epidemic may lead to a second blockade in some countries and regions, and it will be difficult for the United States to give birth in a new round of stimulus plan. After US Treasury Secretary Nuchin put forward the stimulus plan, it was immediately opposed by Democrats and some Republicans. Democrats say the size of the plan is too limited compared with the $3 trillion bill passed by the House of Representatives in May. Some Senate Republicans criticized the plan as too expensive.

In terms of precious metals, precious metals continued their frenzied rally on Tuesday, with the main Shanghai silver trading price capped at 5988 yuan / kg at the start of trading, setting a more than seven-year high. It fell back in a straight line near midday, fluctuated in a narrow range in the afternoon, and finally rose 4.2 per cent. The main force of Shanghai Gold reached a maximum of 440.08 yuan / g, continuing to hit an all-time high, and then fell back, closing up 0.59%. As the market has gone up and down, a large amount of money has flowed out of the futures market. 1.499 billion of the funds temporarily abandoned the precious metals sector, of which Shanghai Gold lost 1.559 billion yuan, while 59.31 million still held Shanghai Silver. The oil chain was abandoned by 1.1 billion yuan, soybean meal and palm oil both lost 394 million, and soybean oil and Zheng oil lost more than 100 million yuan. In addition, the steel, coal and non-ferrous sectors lost more than 200m respectively, while the crude oil and chemical sectors were the biggest beneficiaries, with 480 million and 374 million respectively. 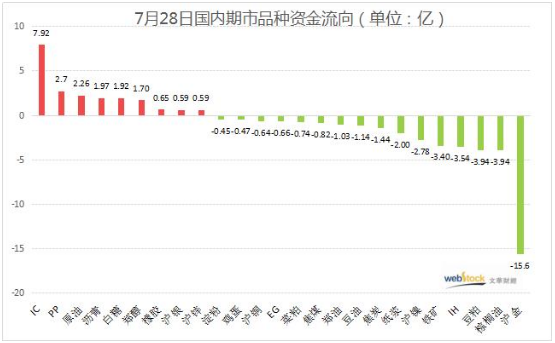 A brief comment on SMM analysts on July 28th

Copper: today, the main force of Shanghai copper opened at 51700 yuan / ton in the morning. After the opening, the bulls entered the market to pull up the copper price above 52000 yuan / ton, to the highest point of 52250 yuan / ton in the day, but the market fell rapidly under short selling. After falling about 400 yuan / ton, the center of gravity stabilized at 51900 yuan / ton. At this time, the copper price fell again, closing at 51640 yuan / ton in midday trading. Copper prices opened in the afternoon to explore the intraday low of 51360 yuan / ton, near the end of the day, the center of gravity of copper in Shanghai slightly rose to 51570 yuan / ton, and finally closed at 51540 yuan / ton, down 150 yuan / ton, down 0.29%. Today, the main daily position of Shanghai Copper increased by 1788 to 115000, mainly for short positions, and trading volume increased by 15000 to 167000. 08 during the contract day, positions were reduced by 3314 to 66000, mainly by long positions, while trading volume decreased by 9000 to 40, 000. Against the backdrop of tense international relations, severe novel coronavirus epidemic and market expectations that the Federal Reserve will remain loose for a long time, the US dollar is under full pressure, with precious metals such as gold and silver soaring to record highs, and copper prices are also boosted, opening high and breaking the 52000 mark in the morning. There was a deep correction in gold and silver during the day, and copper prices fell under pressure. Fundamentally, although the strike at the Centinela copper mine in Antofagasta, Chile has been avoided, the tight supply pattern at the mine side has not changed the market, and copper prices are still supported. Today, Shanghai Copper Yang, KDJ opening convergence, but the top is still under pressure 5-day, 10-day moving average. Wait for the guidance of the outer disk at night to test whether Shanghai Copper can reach the 52000 mark again.