CST
translation
Source:SMM
SMM July 17, Alcoa (Alcoa Corp, (hereinafter referred to as "Alcoa") recently disclosed its second-quarter report, Alcoa had previously said that increased production and sound operation helped the company to develop smoothly during the new crown epidemic. The important parts of the following SMM will be translated and explained.

SMM July 17, Alcoa (Alcoa Corp, (hereinafter referred to as "Alcoa") recently disclosed its second-quarter report, Alcoa had previously said that increased production and sound operation helped the company to develop smoothly during the new crown epidemic. The important parts of the following SMM will be translated and explained. 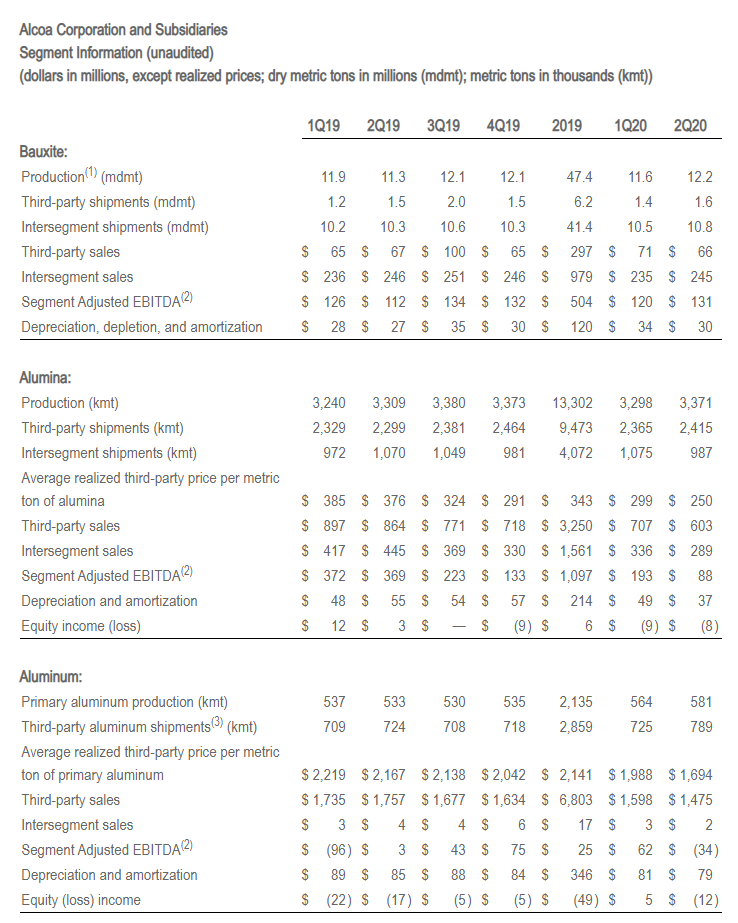 The key points disclosed in the second quarter report are:-Health risk management for global departments, with all sections operating at full capacity;-the company previously said that it had implemented cost reduction measures for operations and production, with a cash balance of US $965 million, an increase of US $136 million compared with the previous month. -Cash income in the second quarter reached US $288 million and net cash flow reached US $211 million, the highest level since the fourth quarter of 2018;-Bauxite production set a semi-annual and quarterly record, a quarterly record for shipments from the port of Juruti, Brazil;-A quarterly record for single-day alumina production. -continue strategic planning, including product output and non-core portfolio adjustment, reduce capital and increase efficiency in 2020, etc.;-enhance asset liquidity and issue US $750 million of bonds on July 13 this year, with a coupon lower than the previous issue.

Strategic measures and plans of the company (excerpt):-on April 22, 2020, Alcoa announced the complete suspension of production at its Intalco aluminum electrolysis plant in ferndale, Washington, which had been running 230000 tons of capacity. The company plans to reduce its electrolytic aluminum production capacity by a total of 1.5 million tons, and the reduction of Intalco production will be completed in the third quarter of this year. Alcoa incurred restructuring expenses of $27 million in the second quarter, including severance payments resulting from production cuts, most of which will be paid in the third quarter. -Spanish collective dismissal project process: Alcoa and the Spanish trade union began a 30-day formal negotiation agenda on June 25, 2020. this dismissal plan will incur high costs, involving 534 employees of the San Ciprit á n electrolytic aluminum plant. No further progress has been made in this dismissal, and the production operations of the San Ciprit á n alumina plant have not been affected.

Update of the impact of the new crown epidemic (excerpt):-Alcoa said that about 2% of employees and partners worldwide were infected, but most of them had recovered and returned to work, and no major outbreaks had occurred in all parts of the company. In the second quarter, affected by the epidemic, the demand for aluminum processing products decreased significantly compared with the previous quarter, mainly due to the decrease in the operating rate of end customers. As an adjustment, Alcoa's aluminum ingot products accounted for an increase in the second quarter.

2020 Outlook (partial excerpt):-Alcoa does not change its forecast of third-party shipments of bauxite, alumina and primary aluminum throughout the year: expected shipments of bauxite are 4800-49 million dry tons, alumina is expected to ship Lyon at 136-13.7 million tons, and expected shipments of raw aluminum are at the level of 29-3 million tons. Alcoa expects bauxite shipments to decline slightly month-on-month in the third quarter of 2020; alumina plate performance will decline slightly, mainly due to the increase in energy costs in Australia; and primary aluminum production costs will fall slightly month-on-month, mainly due to the decline in raw materials and energy costs. -the Xinguan epidemic continues around the world, the extent of its impact is still unknown, there is still a threat to the company's production and operation, and the future operating results may not be in line with expectations due to the impact of the epidemic.

SMM will continue to follow up and translate the second quarter report of aluminum-related listed companies.