In June 2020, SMM China produced 759200 tons of electrolytic copper, down 1.42% from the previous month and an increase of 4.25% over the same period last year. From January to June, SMM China produced a total of 4.4344 million tons of electrolytic copper, an increase of 3.72 percent over the same period last year. The domestic output of electrolytic copper decreased slightly in June from the previous month, but higher than the expected value in May, mainly due to the delayed maintenance plan of the refinery, and the impact of maintenance in June was less than the expected value. In addition, the domestic supply of crude copper scrap improved in June, and the output of refineries using this part of the raw materials also increased.

In June, the price gap of fine waste continued to widen, domestic scrap copper inventory outflowed, superimposed import arrival improved, domestic crude scrap copper supply increased, and crude copper processing fees rebounded by 250 yuan / ton compared with the previous month. However, the mine end still maintains a tense situation, and the interference to production is still expanding. Due to the overhaul of domestic refineries in July, it is expected that the output of domestic electrolytic copper will drop month-on-month in July. 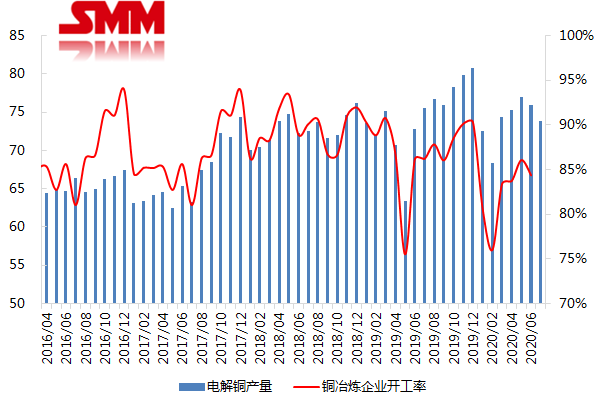