Copper in Shanghai rose during the day, mainly due to rising optimism about the global economic recovery. Us stocks rose collectively, while the US ISM non-manufacturing PMI figure released last night rebounded sharply to 57.1 from 45.4 in May, far exceeding expectations of 50 and reaching its highest level since February this year, while Japan's foreign exchange reserves increased again in June after a decline in May, with a public value of US $1.05024 trillion, an increase of US $8.92 billion over the previous month. The continued improvement in the macroeconomic environment has accelerated market optimism and supported the upsurge in copper prices.

Shanghai copper rose during the day, mainly due to rising optimism about the global economic recovery. Us stocks rose collectively, while the US ISM non-manufacturing PMI figure released last night rebounded sharply to 57.1 from 45.4 in May, far exceeding expectations of 50 and reaching its highest level since February this year, while Japan's foreign exchange reserves increased again in June after a decline in May, with a public value of US $1.05024 trillion, an increase of US $8.92 billion over the previous month. The continued improvement in the macroeconomic environment has accelerated market optimism and supported the upsurge in copper prices. Today, the main force of Shanghai copper opened at 49480 yuan / ton in the morning, fluctuated higher after the opening, climbed all the way up to the intraday high of 49610 yuan / ton, then short positions in copper prices fell slightly, the center of gravity stabilized at 49480 yuan / ton position horizontal finishing, until the afternoon close at 49520 yuan / ton. When trading opened in the afternoon, bears increased their positions one after another, and copper prices briefly fell to an intraday low of 49300 yuan / ton, then rebounded to close at 49360 yuan / ton, up 470 yuan / ton, or 0.96%. The intraday 08 contract reduced 2695 positions to 114000, mainly short positions; trading volume decreased by 10, 000 to 119000; Shanghai Copper 07 reduced positions by 3770 to 29000, mainly by short positions; trading volume decreased by 4000 to 21000. 09 contract day increase of more than 2500 positions, mainly for long positions, 08mur09 contract spread has narrowed to about 70 yuan / ton.

At present, Lun Copper is still at a high level of more than 6100 US dollars / ton, followed by Shanghai Copper, which closed today. MACD red column narrowed, but there is still a 5-day moving average at the bottom, copper prices upward pattern has not been destroyed. Waiting for the guidance of the outer disk in the evening to test whether Shanghai Copper can continue its upward trend and break through the 49500 yuan / ton mark upward. 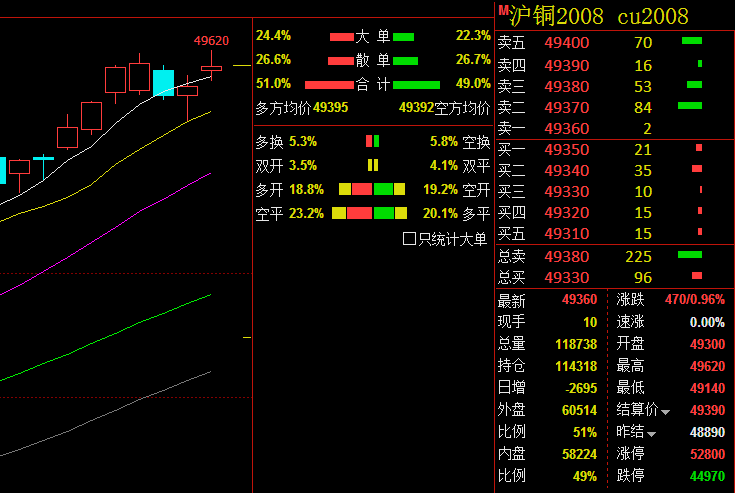 Today, the spot price of electrolytic copper in Guangdong Province has risen by 40 per cent to the current month's contract, with the average price unchanged, while the wet copper price has been quoted at a discount of 10 to 10 per cent, with the average price unchanged. The average price of electrolytic copper is 49595 yuan / ton, and the average price of wet copper is 49535 yuan / ton. Spot market: under the background that stocks continue to increase and copper prices hit new highs, today's consignors' strike price is weak. In early trading, Pingshui Copper once reported rising water 60 yuan / ton, but there were few receivers, and the consignors could only reduce the level of water delivery. By 11:00, good copper reported 70 yuan / ton, flat copper 40 yuan / ton, and wet copper 0ram 10 yuan / ton. Overall, copper prices continue to hit record highs, suppressing the purchasing enthusiasm of downstream manufacturers, which generally maintain the reluctance to increase inventory by purchasing on demand. In addition, the lower reaches prefer low-price non-standard and wet-process copper, which is also one of the reasons for the inactive trading of flat copper. Finally, it is understood that imports of copper will still arrive in the next few days, and stocks are easy to rise and difficult to fall, rising water or maintaining low shocks.

Today, the imported copper market is limited by deserted demand and low activity. The number of offers made by the consignors is limited, and because they expect the price to pick up and are unwilling to lower the price, the price quoted by the second license bill of lading arrived at the end of July and the beginning of August is basically more than 90 US dollars / ton. But the buyer intends to reduce the price, and the counter-offer price is about 85 US dollars / ton. The price gap between buyers and sellers is difficult to close, resulting in a stalemate in the market. The warehouse has not heard of the deal in the morning, and the price remains unchanged for the time being. At present, LME presents a cargo premium structure, and some traders say that recently, most of the goods arriving in Hong Kong are directly declared for import without entering the bonded warehouse, and the increase in bonded warehouse inventory is expected to be limited this week.