SMM7 March 7: with the acceleration of the process of resuming work and production around the world, coupled with the flood of liquidity, copper prices continued the momentum of rebound in April and May showed a sharp rise. The Shanghai Copper Index rose 10.86% in June, up 4770 yuan per ton, while LME rose 12.25%, up 659 US dollars per ton. European and American countries began to deregulate and resume work one after another in mid-May, and the economy improved in an all-round way in June, which is the main reason for the weak and strong families in Shanghai in June. So whether the copper price can continue the rebound momentum in July will be analyzed from the historical probability. 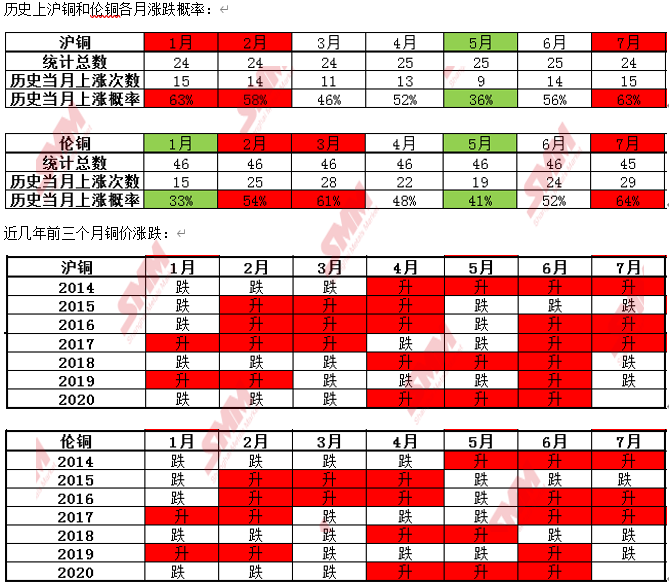 On the whole, the domestic supply decreased month-on-month in July (domestic imports decreased); the demand month-on-month decreased and the scrap copper substitution effect was obvious, which will show a situation of weak supply and demand. The rise and fall of copper prices may be more affected by macro factors, and the recent continued release of water by global central banks is an important factor supporting the rebound in copper prices, but some foreign countries rushed to restart the economy in June, which led to a sharp increase in cases. we need to pay attention to whether there will be measures to re-restrict economic activity in the future, while the domestic production off-season began in July, and copper consumption decreased month-on-month. Therefore, we take a cautious and bearish attitude towards the trend of copper prices in July, believing that copper prices will remain high and volatile, and that there is little chance that copper prices will continue to rebound sharply.