CST
translation
Source:SMM
[metal share price soars rare earth plate to forge ahead hand in hand] Today, the rare earth permanent magnet plate also came out of a strong pattern, rising more than 5%, while 44 shares in the plate only fell slightly. Jiaozuo Wanfang and Aluminum of China, which also belong to the non-ferrous metal plate, rose by the daily limit one after another. China Color shares, Jiangxi Copper, Hongda Xingye followed, rising rapidly.

SMM7 March 6 News: today, the three major stock indexes opened higher collectively, with both the Prev index and the Shenzhen Composite Index rising at the beginning of the session, with the former breaking through 3200 points, while the gem index was depressed and horizontal. Near 10 o'clock, the market showed a wave of decline, and then went up again, and the gem index rose synchronously. In the afternoon, the three major stock indexes continued to advance by leaps and bounds, with the Prev above 3300 points hitting a 29-month high and the banking sector rising and stopping. Notably, the total market capitalization of A shares exceeded $10 trillion for the first time since June 2015. The industry plate is red across the board, with banks, brokerage trust, insurance, coal mining and non-ferrous metals rising at the top; brewing industry, pharmaceutical manufacturing, medical industry, food and beverage, wood furniture is relatively depressed.

An overview of today's market

Today, the non-ferrous metal plate was all red, up more than 6% by the close. Shenhuo shares, Jiaozuo Wanfang, China Gold Lingnan, Chinalco, Electrical Alloy, Huayu Mining, Hanrui Cobalt and so on rose by the daily limit. The rare earth permanent magnet plate also came out of a strong pattern, rising more than 5%, while 44 shares in the plate only fell slightly. Jiaozuo Wanfang and Aluminum of China, which also belong to the non-ferrous metal plate, rose by the daily limit one after another, followed by China Color, Jiangxi Copper and Hongda Xingye. 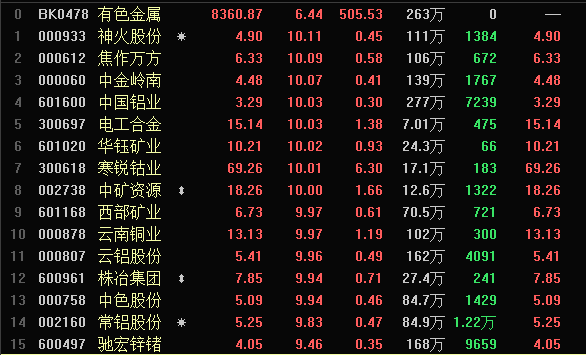 Shenhuo shares announced at noon on June 30 that the company received a "reply on approving the non-public offering of shares of Henan Shenhuo Coal and Power Co., Ltd." issued by the China Securities Regulatory Commission on June 30. if the CSRC approves the non-public offering of no more than 380 million new shares and the increase of share capital leads to a change in the total share capital, the number of this issue may be adjusted accordingly. According to the notice, this reply is valid for 12 months from the date of approval of issuance. The board of directors of the company will handle the non-public offering of A-shares within the prescribed time limit in accordance with the requirements of the above approval documents and the authorization of the shareholders' general meeting, and fulfill the obligation of information disclosure in time in accordance with the relevant provisions.

Chinalco announced on the evening of July 2nd that due to the influence of the market environment, combined with the actual situation of the company, and in line with the principle of giving priority to efficiency, Chinalco decided to implement flexible production on three alumina production lines of Chinalco Shanxi New Materials Co., Ltd. And Shanxi Huaxing Aluminum Co., Ltd., involving an alumina production capacity of about 1.8 million tons.

Aluminum Corporation of China (Chinalco) was incorporated in China in 2001 and its controlling shareholder is Aluminum Corporation of China (Chinalco). Chinalco is an enterprise in China's non-ferrous metals industry, with comprehensive strength in the forefront of the global aluminum industry. It is also a large-scale production and operation enterprise in China's aluminum industry integrating bauxite, coal and other resources exploration and exploitation, alumina, primary aluminum and aluminum alloy product production, sales, technology research and development, international trade, logistics industry, thermal power generation and new energy power generation.

Huayu Mining announced on July 3 that during the period from April 1, 2020 to June 30, 2020, the conversion amount of Huayu's convertible bonds was 9000 yuan, and the number of shares formed as a result of the conversion was 882 shares, accounting for 0.0002% of the total issued shares of the company before the convertible bonds were converted into shares. In addition, Huayu Mining announced on June 29 that the mining project of the Chagele lead-Zinc Mine in Anren County, Tibet Autonomous region, which is a subsidiary of the company, Xigaze Jiashi Mining Co., Ltd., has been approved by the Department of Ecological Environment of the Tibet Autonomous region.

Suning Institute of Finance reported that the era of fast bulls is over, and with the transformation of the investor structure of the A-share market to institutional investors and long-term investors, the future bull market will change the previous sharp ups and downs and gradually move towards low volatility in mature markets. With the gradual acceleration of the pace of financial market reform, the cultivation of investor confidence and the sustained inflow of international capital need a stable and sustainable capital market environment, so A shares are more likely to get out of the long-term slow bull. Vertically, the absolute valuation of A-shares is not only higher than that of Hong Kong stocks, but also lower than that of other major financial markets in the world, so it has a very strong long-term investment value.

Galaxy Securities said that with the macroeconomic improvement, it is recommended to focus on the copper industry, which is highly sensitive to the economy and whose prices have rebounded nearly 40% from the bottom, and recommend Yunnan Copper, Zijin Mining, Jiangxi Copper and Western Mining. In addition, after the lifting of quarantine in the United States, the economy began to recover, and the price of crude oil has also risen from low to 40 US dollars per barrel, which will help to improve inflation expectations in the United States. Under the suppression of nominal yields in the United States by the combination of "zero interest rate + unlimited QE" of the Federal Reserve, the upward trend of inflation expectations will further reduce real interest rates in the United States, which is expected to help gold prices continue to rise. Recommend Shandong Gold, Chifeng Gold, Yintai Gold, Hengbang shares. At present, the lithium price has reached the bottom of the industry, Ganfeng Lithium Industry, Ya Hua Group and Weihua shares, which continue to recommend the upstream resource end of the industrial chain and enter the supply chain list of leading manufacturers of new energy vehicles or power lithium battery manufacturers.