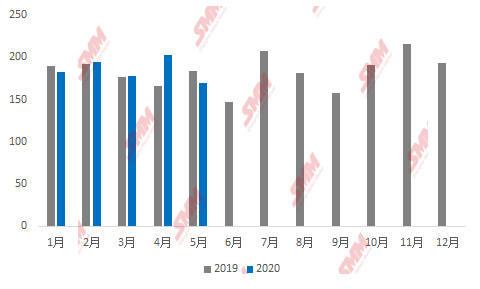 By country, South America is still the main source of domestic copper concentrate imports, with imports from Chile and Peru accounting for 54% of China's total copper concentrate imports in May, but down from more than 70% in 2019, indicating that copper concentrate import data began to be affected by overseas outbreaks in March and April. Among them, the total amount of copper concentrate imported from Peru in May was 300000 physical tons, a decrease of 35.7% from the previous month and 53.4% from the same period last year, mainly because Peru began to enter a state of emergency on March 16. Shipments at Matarani port were paralyzed in April, and a number of large mines were overhauled or suspended operations, as the impact of the logistics cycle on domestic imports began to appear in May. SMM believes that the impact of overseas outbreaks on copper concentrate imports has not been fully reflected in May, and imports are still expected to decline in June and July.

1. In June, copper concentrates imported from April to May are expected to arrive in Hong Kong one after another, while due to the impact of the overseas epidemic, mine shutdowns in Peru, Mexico and other countries, and stagnant port shipments, there has been a significant reduction in imports.

Taken together, SMM expects copper concentrate imports to fall near the 150-1.6 million physical tons in June.