CST
translation
Source:SMM
Overall, this week, aluminum downstream leading enterprises started a small increase of 0.8%, the overall continued stability, the contribution of the increase in operating rate is mainly from the primary alloy early aluminum bar production capacity return, but it is not driven by demand, this also makes A356 alloy processing fees fall rapidly, there may be a certain accumulation of finished products in the future. The impact of export orders on aluminum strip was more significant, and the growth rate of new orders of leading enterprises began to weaken. As a whole, the raw material purchasing rhythm of the original aluminum downstream processing enterprises is affected by the background of high raw material inventory, which turns into a wave band of bargain replenishment, and the wait-and-see time increases.

During the epidemic period, SMM tracked the start-up situation of aluminum downstream processing leading enterprises on a weekly basis in order to understand the most real situation of aluminum downstream processing enterprises resuming work. SMM survey samples are distributed in 12 provinces in China, a total of 41 enterprise samples, the specific distribution is as follows: 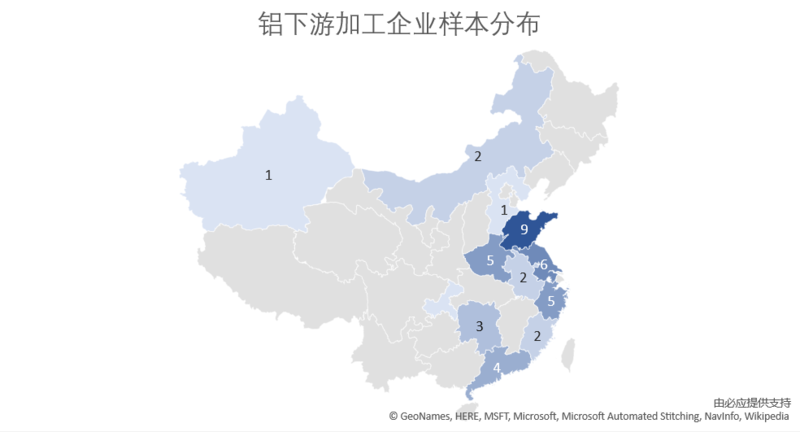 Overall, this week, aluminum downstream leading enterprises started a small increase of 0.8%, the overall continued stability, the contribution of the increase in operating rate is mainly from the primary alloy early aluminum bar production capacity return, but it is not driven by demand, this also makes A356 alloy processing fees fall rapidly, there may be a certain accumulation of finished products in the future. The bright spot consumer sector is still dominated by construction and medicine, and its order schedule is still full of June. Seasonal demand for air conditioning foil, beverage and beer sealing foil has increased. In addition, demand for industrial materials for automobiles and home appliances is also slowly recovering. The impact of export orders on aluminum strip was more significant, and the growth rate of new orders of leading enterprises began to weaken. As a whole, the raw material procurement rhythm of the original aluminum downstream processing enterprises is affected by the background of high raw material inventory, which turns into a wave band of bargain replenishment, and the wait-and-see time increases. In terms of the original aluminum waste aluminum, at present, it is mainly reflected in the low proportion of waste aluminum added by aluminum bar enterprises. considering the reduction of the overall output of waste aluminum in China under the influence of the epidemic, it is expected that in the short term, the proportion of waste aluminum added by aluminum water bar enterprises will not return to the level of the same period last year. However, with the gradual decline of aluminum rod processing fees, the proportion of waste aluminum will still rise slowly. It is expected that next week, because the current orders of aluminum processing enterprises are still relatively sufficient, construction will continue in the short term, but in the procurement of downstream raw materials, if aluminum prices remain high around 13500 yuan / ton, there will be a slight decline in the likelihood of a slight decline. the reason is mainly due to the slight weakening of new orders under high raw material inventory and the increase of wait-and-see mood among downstream enterprises. Primary aluminum alloy: with the reduction of the processing fee of aluminum bar 6063, the production capacity of some of the converted aluminum bars has increased again in the early stage, and the output of A356.2 has increased again, and the operating rate of the first five primary alloys has risen to 64.2% this week. However, it should be noted that the increase in operating rate has almost nothing to do with demand. Downstream aluminum wheel factories have reduced production due to fewer orders, and it is expected that the primary alloy will enter a tired inventory stage. Due to the ample supply of A356.2, the processing fee has also returned to the level before the price rise in mid-April.

Aluminum strip: the operating rate of large plate and strip enterprises this week is basically the same as that of last week. Large leading plate and strip enterprises still say that the growth rate of new orders is less than that of the previous two weeks, and the decline in foreign trade orders is particularly obvious. In order to keep up with the original normal production pace, they can only open up more domestic customers, resulting in the impact of price competition among enterprises. It is understood that there was an increase in processing fees for aluminum plate and strip enterprises in April, ranging from 100 to 300 yuan per ton. judging from the current situation, the processing fees were basically adjusted back to the original level by the end of May, and there are even signs of further decline. In addition, the production capacity and output of other large plate and strip enterprises in Tianjin and Henan have increased recently, which has intensified the competition in the industry to a certain extent, resulting in a slight decline in the operating rate of the sample leading enterprises. As far as next week is concerned, companies are not optimistic about June, and the impact of the traditional off-season on their own demand caused by the superimposed epidemic makes them worry about the future.

Aluminum cable: the operating rate of large cable companies this week is the same as that of last week. According to the SMM survey, the aluminum cable market is relatively stable, large cable enterprises still give priority to orders received before the production year, and the production schedule is still 1-2 months, production is basically planned according to the delivery schedule of the national network, and the operating rate is maintained at more than 70%. Individual cable companies with a relatively high proportion of exports said that at present, seaborne shipments are basically normal, and most of the backlog of overseas orders in the previous period has been completed, and the inventory of finished products has dropped, but the subsequent export orders have fallen off a cliff. As a result, there are concerns about future export demand. In terms of the domestic market, the bidding volume of the national network order is still not much. As far as enterprise expectations are concerned, the national network and southern network orders basically maintained a low release in the first half of the year, and the concentrated UHV orders are still expected to be at the end of the third quarter.

Aluminum profiles: the operating rate of profile enterprises this week is the same as that of last week. Orders from large-scale profile enterprises are good, and large construction profile enterprises are expected to maintain a relatively high level of production in June, relying on demand in the areas of real estate and infrastructure. Local projects involving infrastructure and livelihood improvement will also generate some new orders. In terms of industrial profiles, the demand for automobiles and household appliances continued to be repaired in May, and photovoltaic and communication base stations can also provide a large number of orders. However, the epidemic situation in some overseas areas has not been fully controlled, and the impact of profile export continues. In terms of raw materials, the continuous rise in aluminum prices has led to a continuous decline in aluminum bar processing fees, and recent new orders from some small and medium-sized enterprises have also decreased, resulting in a reduction in procurement. However, under the support of strong domestic demand, there is little room for a pullback in the operating rate of large profile enterprises in the short term.

Aluminum foil: the operating rate of aluminum foil this week is 86.8%, down 1.7 percentage points from last week. There are two main reasons for the decrease, one is that there are problems in the production lines of some enterprises, although they have orders, they cannot be produced; the other is that the foreign trade of some aluminum foil enterprises has been dealt a heavy blow, especially in India, where the epidemic situation is superimposed with the previous two factors, which has a great impact on exports. From a product point of view, drug foil can still maintain production, but it is expected to enter the off-season of medicine foil from June, probably until August; the demand for air-conditioning foil is rising, entering the peak season; the double zero packaging market is still hot, and some enterprises are full production until August; electronic foil export is slightly blocked, overseas downstream demand is sluggish; heat sealing demand is still there, and the processing fee is higher than air conditioning, household use, foil factory has a greater desire to take orders. In June, air conditioning foil and packaging foil are expected to maintain the existing demand, the output of pharmaceutical foil is expected to decrease, the export situation in Europe and the United States is getting better, and the epidemic situation in Southeast Asia is not yet clear. on the whole, the start-up rate is expected to decrease slightly next week.

Recycled aluminum alloy: this week, the industry operating rate of recycled aluminum leading enterprises maintained 59.4%. In terms of demand, the demand for motorcycles, engineering vehicles, machinery and equipment and civilian products is OK, but the demand for major terminal passenger cars is still weak, directly or indirectly related to export demand is still no sign of recovery, the overall demand is still weak, and the current June demand is still unclear, most recycled aluminum enterprises wait for downstream plans, but overall it is difficult to grow, and the probability remains stable. In terms of aluminum bars, due to the rise of aluminum base prices, downstream due to high raw material inventories and weakening new orders, demand weakens in stages, aluminum bar processing fees continue to weaken slightly in the week, but they are still relatively high. At present, after considering the burning factors, the price advantage of waste aluminum of all kinds of profiles in China returns to 300 million 400 yuan / ton, which makes the proportion of waste aluminum added by aluminum water bar enterprises to some extent. It is expected that the proportion of original aluminum scrap at the end of aluminum water rod will continue to decrease with the reduction of processing fees in June, and its additional consumption of primary aluminum for the whole month is expected to drop to about 100000 tons.