CST
translation
Source:SMM
[SMM analysis: iron ore futures are cautiously overly bearish under the support of 700-point demand] on the whole, the month-on-month outbound of Australia and Pakistan has increased, and the outbound data led to a certain correction in the iron ore futures market due to the loosening of the expected supply side of the market. However, according to the results of the SMM survey, it is expected that the purchase volume at the terminal site will continue to increase in June compared with May. In the later period, the steel price is likely to show a strong trend. In the case of no significant negative changes on the demand side, there is an opportunity for iron ore to rebound in the later stage.

SMM5, March 27: the most actively traded September iron ore contract hit its highest level since August last Friday, up more than 20% since the beginning of the year. However, due to yesterday's unexpected increase in foreign mine shipment data, the previous increase was too large, yesterday's mine price pullback fell to the lowest 685 yuan / ton. However, today's day closing decline narrowed to 0.07% to 706 yuan / ton, inflows of more than 700 million, a daily increase of 46000 hands. On the demand side, SMM conducted a centralized survey on the actual situation of terminal demand, and a total of 46.34% of the sample enterprises clearly indicated that the purchase of raw materials in May was higher than that in April, which directly confirmed the strength and tenacity of steel demand in May. And according to the research situation, the terminal "steel demand" is expected in the later stage, and the purchase volume of the terminal site in June is expected to continue to increase compared with May. "check the details."

On the inventory side, iron ore port inventories reached a new low in nearly three years. As of May 22, inventories at 35 ports tracked by SMM totaled 100.45 million tons, down 1.33 million tons from the previous month and 17.84 million tons from a year earlier, the lowest level in nearly three years. At the same time, the average daily dredging capacity of the port increased by 36000 tons month-on-month to 2.805 million tons, an increase of about 2.8 per cent. The rigid demand of domestic steel mills for iron ore has led to a continuous decline in port inventory.

On the whole, there has been an increase in the month-on-month outbound of Australia and Pakistan, and the outbound data has led to a certain correction in the iron ore futures market due to the loosening of the expected supply side of the market. However, according to the results of the SMM survey, it is expected that the purchase volume at the terminal site will continue to increase in June compared with May. In the later period, the steel price is likely to show a strong trend. In the case of no significant negative changes on the demand side, there is an opportunity for iron ore to rebound in the later stage. 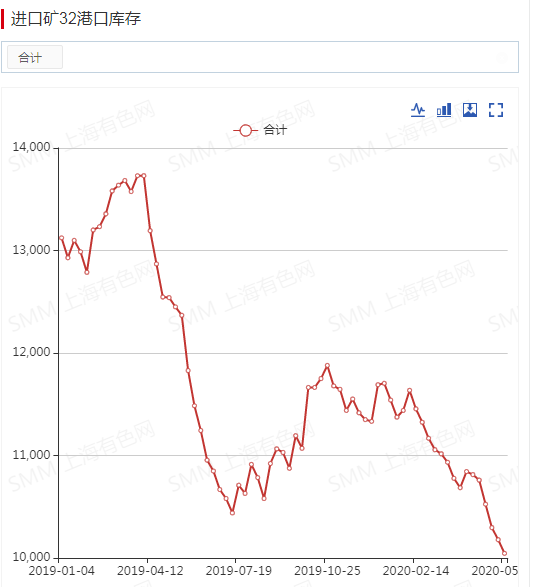 NBS: China pig iron output dipped 1.2% YoY in April
China’s output of pig iron increased 7.5% to 72.02 million mt in April from a month ago, to generate a year-over-year decline of 1.2%, according to data from the National Bureau of Statistics (NBS) released on Friday.

CISA: Steel products inventories in China fell 5.4% in late-April
Data published by the industry body on Tuesday showed that social inventories of hot- and cold-rolled plates/coils, heavy & medium plates, wire rods and rebar in 20 Chinese cities stood at 16.24 million mt as of the end of April, down 930,000 mt, or 5.4% from April 20.

SMM Webinar Series: COVID-19 global disruption: Demand/supply changes of China’s ferrous metals markets
The global widespread of COVID-19 has forced many countries to enforce stringent containment measures which result in a heavy impact on global economic activity. Over the past two months, we saw serious disruption of manpower, transportation and production in China. We are now seeing these scenarios happening around the world.

China HRC inventories extended decline on strong demand in the north
Inventories of hot-rolled coils of steel sheets used to produce home appliances and cars in China fell for a third straight this week, as demand from north China was strong. SMM data showed that HRC stocks across social warehouses and steelmakers decreased 2.2% in the week ended April 2 to 5.45 million mt, 73.62% higher than the same period after the Lunar New Year holiday last year. The stocks fell 1.38% in the prior week.

Coronavirus to boost China’s steel billet imports and reduce exports
With measures to contain the fast-spreading coronavirus pandemic slowing business activity outside China and jeopardising demand for steel, steel billet prices in some countries are seeing sizable discounts against Chinese prices, boosting flows to China. Southeast Asian billet is currently offered at $405-410/mt, tax included, in China, while resources from producers in Jiangsu, East China, will cost about $462/mt. That creates a price gap of nearly 300 yuan/mt. Billet from Russia is around $35/mt cheaper than those from Southeast Asia in terms of FOB prices.

China HRC inventories declined for 1st time since the Lunar New Year holiday
Inventories of hot-rolled coils of steel sheets used to produce home appliances and cars in China fell this week, marking the first week-on-week decrease since the Lunar New Year holiday, as demand recovered and mills were still undergoing maintenance. SMM data showed that HRC stocks across social warehouses and steelmakers decreased 2.28% from a week ago to 5.65 million mt as of Thursday March 19.

Chinese steelmakers recovered production while end-user recovery progressed slowly
According to the SMM survey that covers 102 blast furnace steel mills, 42.2% of them are undertaking maintenance or have trimmed output (excluding mills that reduced output by adjusting rates of equipment utilisation and raw material ratios), down from a ratio of 50% last week, as some long steel mills have recovered production from maintenance.