SMM5, March 15: this Friday's external financial markets, international oil prices generally rose, non-ferrous metals also warmed. Copper stocks fell, with inventories in SMM's mainstream copper market totaling 255100 tons as of Friday, down 27600 tons from Friday and the ninth consecutive week of decline, according to SMM research. Among them, copper stocks in Shanghai fell 19500 tons to 199000 tons from the previous week, and other regions have fallen back. In addition to zinc, it has been reported that 11 mines in Peru will restart production; in the first phase, Peruvian mining will restore 80% of its production capacity. Peru, as the second largest zinc mine producer in the world, has a relatively limited actual recovery. Overall, overseas zinc mines are expected to be tight from June to July. SMM expects that changes in domestic zinc concentrate processing fees will be limited by the end of May, but in June, due to the impact of imported mines from Peru and other countries, it is expected that there will be room for reduction in zinc concentrate processing fees.

The black series remained strong again, with iron ore up 3.33% and threads up 0.2%, hot rolls up 0.63%. Spot, with the second round of coke up gradually landed, iron ore spot prices since mid-May also pulled up 10-15 yuan / ton, in the case of rising costs, steel mills willing to raise prices, driving today's thread spot price trend is strong, especially Shaanxi, Shanxi, Henan, southwest and other places than other regions on the big side, and according to the SMM market tracking, the current shipping situation is still OK. At present, the demand side is affected by increased infrastructure investment and real estate rush, and remains in a very good state. On the supply side, due to the rising prices of scrap steel, the growth rate of output will slow down in the future. Weather factors in the subsequent rainy season need to pay attention to whether they have a negative impact on demand.

Crude oil rose 5.06% in the previous period. Us oil's July contract rose 7.95 per cent yesterday, hitting its highest level in nearly a month. The reason is mainly due to the recent compensatory rebound due to the panic collapse in oil prices caused by the sudden drop in demand and storage capacity. Moreover, the recent resumption of economic activity in some countries, coupled with the good news of crude oil institutions such as IEA, directly contributed to the short-term surge in oil prices. However, whether the oil price can maintain the rebound remains to be seen, mainly due to the fear of another rebound in the epidemic and the uncertainty about the oil price trend aggravated by the actual recovery speed of global demand. 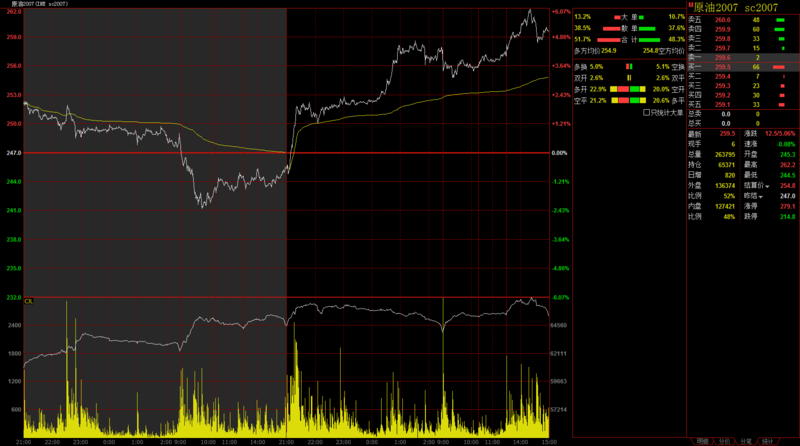 The rising atmosphere spurred an influx of capital, with the Mandarin commodity index inflow of more than 2 billion yuan. Among them silver crazy performance makes precious metal plate inflow nearly 2.2 billion yuan, become the capital most favored plate. Chemical products and black two plates are also good, absorbing 900 million yuan and 800 million yuan respectively, with the help of the star varieties in their respective plates. Iron ore, for example, flows into more than 900 million yuan. However, the gold absorption capacity of PTA and methanol in chemical products is relatively strong.

Copper: the main force of copper in Shanghai was more than 43050 yuan / ton in the morning. After the opening, the short position reduction copper price rose more than 150 yuan / ton, and continued to climb to 43290 yuan / ton after a slight correction. At this time, the market fell to 43080 yuan per ton, and closed at 43150 yuan per ton at noon. In the afternoon, copper prices rose to a daily high of 43320 yuan / ton, but the rising momentum was limited. Near the end of the day, the long profit left the market superimposed short positions, Shanghai copper fell, and finally closed at 43130 yuan / ton, up 120 yuan / ton, up 0.28. Intraday 06 contract position reduction of 1658 hands, to 111000 hands, mainly for short reduction, with 07 contract position difference of 11000 hands, 07 contract trading volume has exceeded 06 contract, Shanghai copper is about to complete the exchange month. The copper center of gravity in Shanghai rose within the day, mainly due to the linkage of the sharp rise in international oil prices. In its latest monthly report, the International Energy Agency said it expected the global oil market to improve as a result of historic production cuts. Although crude oil demand is difficult to recover in the short term, the slowdown of the blockade and the increase in liquidity have eased the serious oversupply of crude oil. The sharp rise in oil prices has helped copper prices rise from their lows during the week. However, the annual rate of decline in total retail sales of consumer goods in April exceeded expectations, limiting the increase in copper prices to a certain extent. At present, Shanghai Copper close Yang, the bottom of the 20-day and 60-day moving average support. Waiting for outside guidance at night to test whether Shanghai copper can rise again. Today, the Shanghai copper 2005 contract is facing delivery, opening at 42900 yuan / ton, closing at 43980 yuan / ton, up 820 yuan / ton, or 1.90%, settling at 43190 yuan / ton, with a position of 4305 hands and a delivery volume of 21525 tons.

Aluminum: Shanghai aluminum main force 2007 contract opened in the morning at 12540 yuan / ton, opening K line lower than 12515 yuan / ton intraday lowest point, intraday concussion upward, three times higher three times fall back, afternoon high stop at 12630 yuan / ton intraday high point, the end of the day sinking at 12600 yuan / ton, trading volume increased 6181 hands to 92705 hands, position increased 4656 hands to 154000 hands, closed at the small yang line, up 115 yuan / ton, up 0.92%, recorded three. The center of gravity rises above the 60-day moving average, the daily KDJ three lines converge upward, and the MACD red line shortens. It is expected to maintain interval oscillations at night and continue to explore the size of the space above. The 2005 contract of the month opened at 13185 yuan / ton on the last delivery day today, and the intraday concussion rose by 13120 yuan / ton to close at 13015 yuan / ton. The settlement price was 13035 yuan / ton, up 1.21% on the day, with a small negative line. The trading volume increased by 905 hands to 7065 hands, the position decreased by 2920 hands to 13650 hands, and the delivery volume was 68250 tons.

Lead: within the day, the Shanghai lead main force 2006 contract opened at 13830 yuan / ton, after basically around 13850 yuan / ton first-line shock, in the afternoon, part of the short stop profit left the field, Shanghai lead strengthened, the center of gravity moved up, during the period once touched 13980 yuan / ton, finally closed at 13940 yuan / ton, up 115 yuan / ton, up 0.83%, position reduced 2602 hands to 21342 hands. Shanghai lead report Xiaoyang line is still running in the box area, and the trend of each moving average is leveling off. from a fundamental point of view, the price of waste batteries is easy to rise and difficult to fall, the inventory of superimposed primary lead smelters is scarce, and the possibility of a surge in supply-side pressure in a short period of time is relatively small. Shanghai lead is expected to maintain the operating market in the range in the near future.

Zinc: within the day, the main 2007 contract of Shanghai zinc opened at 16475 yuan / ton, and some bullish positions were promoted at the beginning of the session. The upper test of Shanghai zinc fell after the upper test of 16515 yuan / ton, but the upper test still ended in failure, and then the center of gravity moved down to a narrow range of fluctuations around 16430 yuan / ton. In the afternoon, bullish funds poured in again, and Shanghai zinc recovered to sort out and run near the opening price, and finally closed up at 16465 yuan / ton, 35 yuan / ton higher than the daily closing price, or 0.21%. Trading volume increased by 10617 hands to 128000 hands, position decreased by 785 hands to 115000 hands. Shanghai zinc stop negative turn red, zinc price decline led to a significant improvement in downstream buying willingness, the decline in social inventory is obvious, the current supply-side story has not yet ended as a bottom force, it is expected that the short-term 40-day moving average support is effective.