May 12, SMM: as of April 30, 2020, with the exception of some listed companies delayed the release of annual reports due to the impact of the epidemic, the 2019 annual reports of the vast majority of companies have been disclosed. According to our SMM statistics, a total of 13 listed companies have copper smelters. These 13 listed companies are: Tongling Nonferrous (000630), Jiangxi Copper (600362), Jinchuan International (02362.hk), Daye Nonferrous (00661.hk), Yunnan Copper (000878), Zijin Mining (601899), Yuguang Gold and lead (600531), Western Mining (601168), Tin (000960) and Hengbang (002237). China Gold (600489), Silver Nonferrous (601212) and Jintian Copper (601609). Only one company, CICC Gold, delayed the publication of its annual report because of the epidemic, and the rest have been released as scheduled. Two major events have taken place in the copper smelting enterprises listed since 2019: the first is that Jiangxi Copper acquired Hengbang shares and became its major shareholder; the second is that Jintian Copper successfully transferred from the new third board to the main board.

Global economic and trade growth has slowed significantly since 2019, with continued downward growth in major developed economies and increased downward pressure on emerging economies. The US government's unilateralism and protectionist policies have led to a decline in world economic growth, while the effectiveness of monetary and fiscal policies in various countries, especially in developed economies, has been weakened. coupled with the lack of global aggregate demand, global economic growth has been seriously suppressed. The domestic economy has maintained a stable operation on the whole, but it is also faced with Sino-US trade war, increased downward pressure on the economy, steady and slow industrial operation, rapid rise in price levels, sluggish investment demand, unstable consumer demand, and increased imbalance in regional growth.

The overall performance of copper prices in 2019 is a narrow range of shocks. In the first half of the year, the world's major economies recovered weakly at the beginning of the year, but the trade war between China and the United States rose again during the 5.1 period, with copper prices falling rapidly, and copper prices rose first and then depressed in the first half of the year. In the second half of the year, the Fed cut interest rates twice in July and September, followed by more than 20 countries and regions. China continues to stabilize its economy by opening wider to the outside world, expanding infrastructure construction, and supporting real enterprises. In December 2019, China and the United States reached the first phase of the trade agreement, the market risk aversion cooled, copper prices ended the low shock and rebounded. Lun copper peaked at $6609 a tonne in 2019 and hit a minimum of $5518 a tonne, closing at $6149 at the end of the year, with an average price of $6005 a tonne, down 8 per cent from a year earlier. The average spot price of copper in the domestic market was 47739 yuan / ton, down 5.8 per cent from the same period last year.

Let's take a closer look at the annual reports of these 12 listed companies: (the following data are extracted from their 2019 annual reports)

I. net profit vested in the parent company and net profit after deducting non-recurring profits and losses

Jinchuan International suffered the biggest drop in revenue, mainly due to a sharp decline in commodity prices during the year, in particular the annual average price of cobalt was $16116 / tonne in 2019 and $69961 / tonne in 2018.

2. In 2019, the year-on-year growth rate of the net profit of the above-mentioned enterprises showed obvious differentiation, which can be roughly divided into four categories of enterprises:

The first category is: stable growth categories such as: Tongling, Zijin, Western Mining, Daye Nonferrous and Yunnan Copper, their business income steadily increased, the net profit also followed a better growth, the most prominent performance is Yun Copper, with the release of new production capacity (Chifeng Yun Copper 400000, Chinalco Southeast Copper 400000), its operating income and net profit increased significantly; After steady development, Daye Nonferrous has finally succeeded in turning losses into profits this year. It is expected that with the commissioning of the new production line, its operating income and net profit will increase steadily in the future.

The first category is: affected by the increase of financial costs, foreign exchange losses and other reasons; its net profit margin still fell under the background of the increase in operating income, such as Jiangxi Copper, Tin shares, Hengbang shares. Among them, Jiangxi Copper has to pay a large financial cost because of the acquisition of Hengbang shares, which leads to only a slight increase in its net profit under the background of a substantial increase in operating income.

The first category is: affected by the decrease in operating income and the decrease in other expenses (management expenses, financial expenses and increased R & D expenses), the net profit margin has increased significantly. Yuguang Gold, lead and Silver Nonferrous Metals are the representatives of such enterprises.

The first category is: the main business operation of the enterprise is not good, resulting in a simultaneous decline in net profit, Jinchuan International is the representative of this kind of enterprise.

On the whole, due to various reasons, the net profit of most enterprises increased year on year in 2019, which is better than that in 18 years.

4. From the point of view of deducting the ratio of non-recurrent profit and loss to net profit, the matching degree of most enterprises is still quite high, all above 75%, but there is also a special case. If Silver Nonferrous deducts non-recurring gains and losses, its net profit becomes negative, with a sharp decline of 716%. There are two reasons for such a big decline: 1, government subsidies including profits and losses in the current period were 35 million yuan, compared with 25 million yuan in the previous year; 2, except hedging, the return on financial assets was 1.418 billion yuan, compared with 0 billion yuan in the previous year.

II. Gross profit margin of major products and its changes 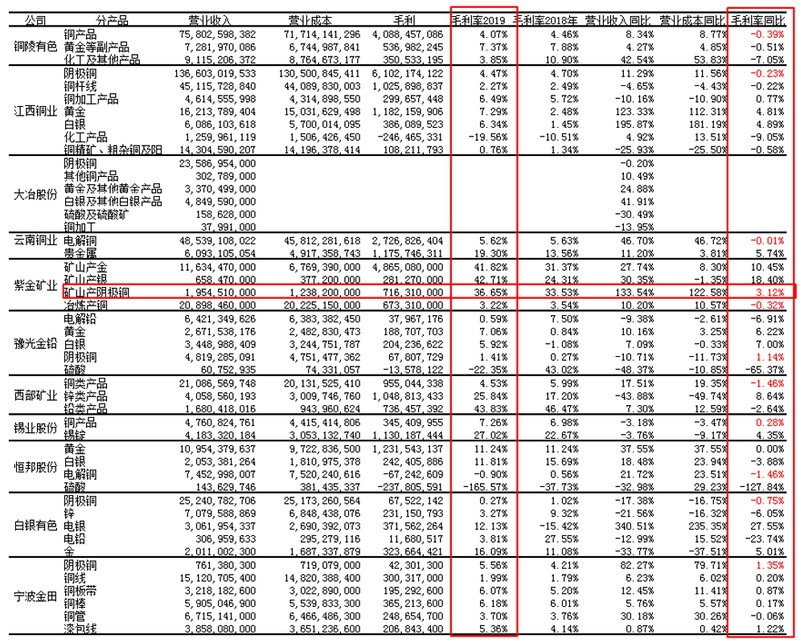 The following conclusions can be drawn from the figure above:

1) the average gross profit margin of cathode copper in 2019 was 3.55%, down 0.19% from 3.74% in 2018. The decline in copper processing fees is the main reason: the long-term agreement price of TC (copper processing fee) in 2019 is 80.80 US dollars per ton, which is 1.45 US dollars per ton lower than that of 82.25 US dollars per ton in 2018. Affected by this, the gross profit margin of electrolytic copper in almost all smelters has declined, and only the gross profit margin of Yuguang Gold lead and Ningbo Jintian has gone up against the trend. The reason for the rise in Yuguang Gold and lead is that the decrease in procurement cost in 19 years is greater than that in the market price of finished products. The reason for the rise in Jintian, Ningbo is that the purchase cost of waste copper is relatively high in 19 years, and the profit of producing electrolytic copper from waste copper has increased.

In addition, one data that requires special attention is that Zijin mines produce cathode copper, with a gross profit margin of 36.65%, up 3.12% from a year earlier. This shows that the gross profit of copper production in smelter-owned mines is very high, which is the main reason why major smelters strive to improve the output of their own minerals.

In addition, there is another data that is worthy of our attention: the profit of copper smelting;

Taking Jiang Copper Qingyuan and Ningbo Jintian as an example, their operating income and net profit increased significantly in 2019, mainly due to the increase in copper smelting profits due to the widening price difference between waste copper and electrolytic copper.

(2) Copper downstream products, although the factories have not announced them directly, we can still see from some details that due to the double blow of falling copper prices and fierce market competition, the net profit margins of most copper processing industries (copper rod, copper tube and copper foil enterprises) fell in 2019, while the net profit margins of enamelled wire, copper strip and copper rod industry increased slightly.

Overall, the ranking of net profit margins for the copper processing industry in 2019 is as follows: 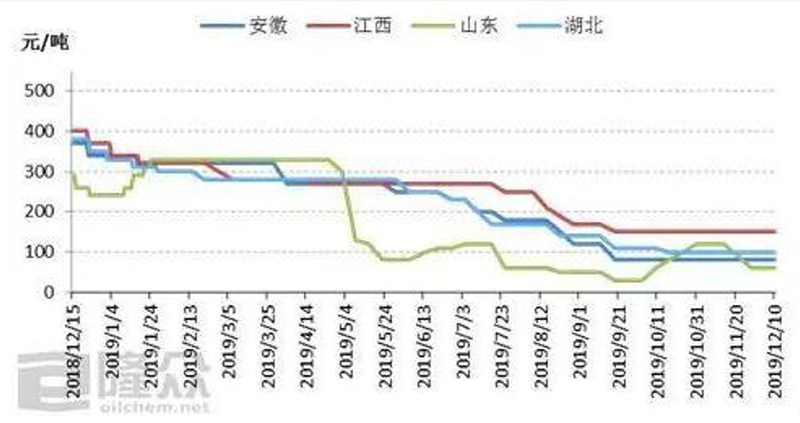 In 2019, the overall performance of international gold and silver prices was fair. The weighted average price of gold spot on the Shanghai Gold Exchange closed at 312.06 yuan / g, up 15.41 percent from the same period last year. The average annual price of silver TD contracts was 3896 yuan / kg, up 8.14 per cent from a year earlier.

In 2019, smelting enterprises continued to strengthen environmental protection efforts, 19 years of environmental protection emission standards are up to the standard, and are moving closer to the special emission standards (sulfur dioxide 100mg green m3, particulate matter 10mg/m3). In addition, in terms of total emissions for the whole year, emissions from refineries in 19 years were significantly lower than those in 18 years, and only a few enterprises had slightly higher emissions than in 18 years, but even the increase was much lower than the approved total emissions. Overall, we believe that copper smelters that are forced to stop production due to environmental problems will not appear.