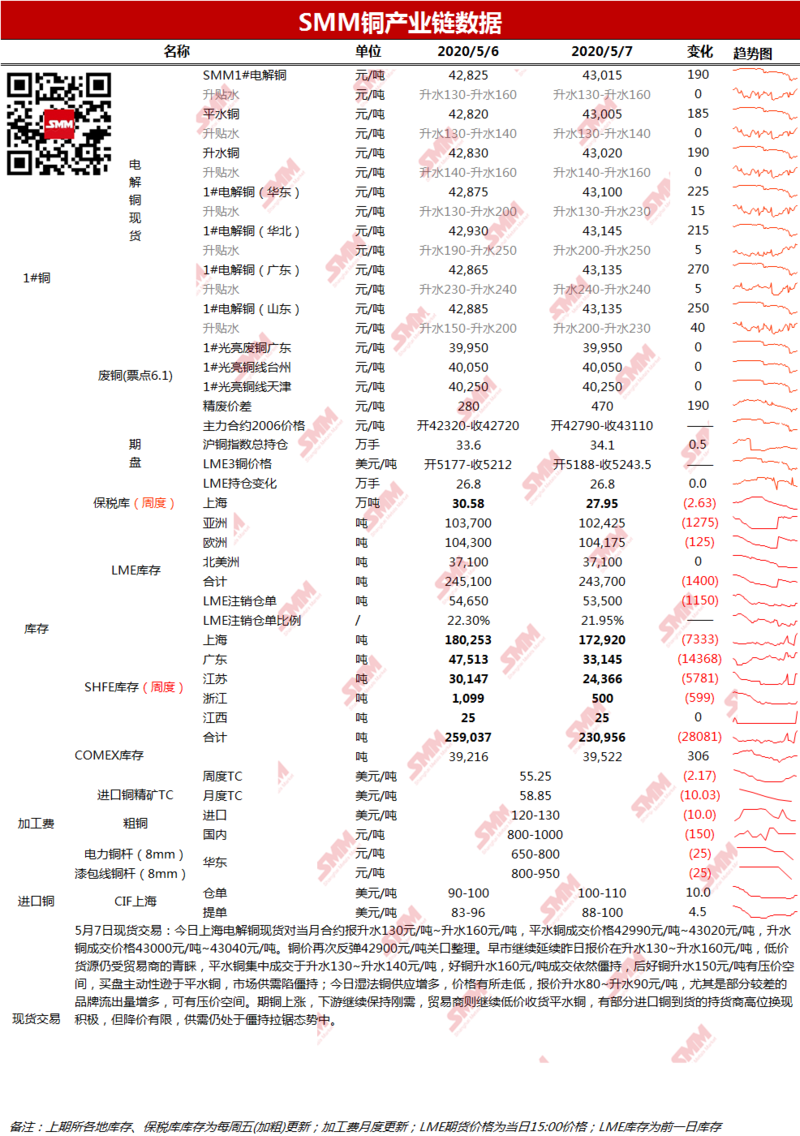 [5.8 SMM Bronze Morning meeting Summary] Macro aspect: 1) the number of initial claims for unemployment benefits in the week of May 2 in the United States was 3.169 million, with an expected 3 million, compared with a previous value of 3.839 million; the four-week average was 4.1735 million, and the previous value was revised from 5.03325 million to 5.035 million. [bearish] 2) the UK central bank's benchmark interest rate remained unchanged at 0.10 per cent in May, while central bank asset purchases remained unchanged at £645 billion in May. [Lido] 3) China's trade account in April far exceeded expectations, and exports rose unexpectedly: China's annual export rate (denominated in RMB) in April was 8.20% in real terms, expected to be-14.10%, and the previous value was-3.50%. Fundamentals: 1) data released on Thursday by the Chilean Copper Commission, a copper concentrate, showed that large Chilean copper mines expanded production in March at the time of the outbreak of Xinguan pneumonia, and that the production of (Codelco), the Chilean state copper company, increased sharply. (Codelco), the world's largest copper miner, rose 14.8 per cent to 147600 tonnes in March from a year earlier. Chile's Codelco production jumped 4.2 per cent to 386600 tonnes in the first quarter of this year, according to the Chilean Copper Commission. [bearish] 2) the price difference of scrap copper yesterday was 470 yuan / ton. Copper prices continued to pick up yesterday and pulled up faster at the end of the afternoon. It is expected that the fine scrap price spread will further expand, and the efficiency of scrap copper rods should continue to improve, but subject to scrap copper supply, maintain the expectation of a small recovery in May production of scrap copper rods. [Lido] 3) imported copper prices continued to open yesterday, import profits in the vicinity of 100 yuan / ton, the market transaction is active. Warehouse receipt supply is scarce, driven by demand, the seller further raised the price, there has been a two-brand warehouse receipt of US $120 / ton quotation. The transaction price of warehouse receipts has been rising rapidly since yesterday afternoon, with the average transaction price rising by $10 / ton compared with the previous day. In the aspect of bill of lading, the offer has been reduced, and some traders have chosen to hold the goods on the sidelines, as the price of the bill of lading is still expected to rise. At present, the transaction price of the second-card bill of lading has risen to around $100 per ton. There is a small amount of 7QP bill of lading quotation in the market, not heard of the transaction. 4) stocks LME copper stocks decreased by 1400 tons to 243700 tons on May 7, while copper warehouse receipt stocks in the previous period decreased by 7910 tons to 72950 tons. [neutral] 5) spot East China: on the spot side, the downstream continues to maintain immediate demand, while traders continue to receive flat copper at low prices, and some holders of imported copper arrive at a high level, which is expected to exert some pressure on the rising water. Spot water is expected to rise by 120-150 yuan per ton today. South China: Guangdong electrolytic copper spot contract rose 240% to 240% yesterday. In the spot market, after the festival, Guangdong inventory increased only a day later and fell sharply again, the holder was eager to raise the price, the flat water copper rose too high in the morning trading, there were very few recipients, and the holder could only lower the rising water to ship the goods, but the effect was not obvious. Overall, the recent consumption momentum in Guangdong is still good, coupled with the limited arrival of goods, we expect to continue the momentum of inventory, rising water will remain high. Copper prices and forecasts: last night, Lun copper closed at US $5280.5 / ton, up 1.19%, trading volume 15000 hands, short positions reduced 1952 hands to 266000 hands; last night, Shanghai copper closed at 43030 yuan / ton, up 0.89%, trading volume 168000 hands, long positions 4390 to 341000 hands. Last night, copper prices continued to perform strongly, and the operating center continued to move up, reaching the 43000 gate in the evening, mainly because investors expected the worst damage to the economy as more regions lifted the epidemic blockade. Optimistic expectations for developed countries such as Europe and the United States supported higher stock markets and increased risk appetite. On the other hand, dovish comments by Fed officials have sparked speculation about negative interest rates in the US, and the fall in the dollar index has also fared well for large categories of asset prices. At present, Shanghai copper in Yang, there are a number of moving averages below the support. Today, the outer plate summer holiday closed, Shanghai copper is expected to 42900-43500 yuan / ton.