According to SMM Iron and Steel on May 7, the total inventory of hot rolled coils this week was 4.4451 million tons,-2.31% month-on-month and + 45.99% year-on-year. Although the decline continued this week, the rate of decline was significantly narrower than in the previous period. 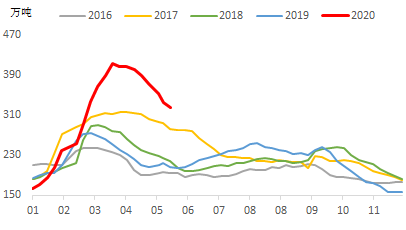 According to SMM analysis, the continuation of the decline this week is still mainly driven by the continued rebound in terminal demand. According to SMM, North China and South China and other markets opened early, pipe plants, construction machinery and other terminal demand continued to release, the transaction is gratifying, promoting inventory to continue to digest. However, subject to the opening of most markets after the festival, coupled with the increase in arrivals in the mainstream market, even if transactions are hot in the past two days, the overall rate of reduction is not as fast as before the festival, in line with pre-festival expectations.

In addition, many customers have asked, "is the spot price going to soar?" 。 In fact, judging from the recent arrival of goods, the arrival of goods in East and South China continues to be on the low side, the superimposed demand picks up, the stock decline continues, and there is no big problem with the short-term price rise, but there are still no conditions for a sustained surge (see SMM Hot Rolling monthly report for details). And here to remind is that since the end of the day by the disk boost, spot prices pull up too fast, the actual terminal procurement situation has not kept up, especially in East China, South China, so it is expected that the subsequent spot price or there is a small correction risk, low treasurers to catch up with high replenishment needs to be cautious. It is suggested that every callback can be appropriate to replenish the warehouse, maintain a relatively abundant inventory, waiting for the price to rebound for shipment.