SMM Iron and Steel, May 6, this week's mainstream market resources are expected to arrive 126000 tons, an increase of 37000 tons from last week. Lecong Market: although there has been an increase in arrivals this week, the overall volume has remained low, giving the market some breathing space. According to SMM, the recent port pressure situation in the market has basically alleviated, coupled with the continued recovery of demand, traders shipment smooth, market inventory pressure significantly alleviated. At the same time, under the support of less arrival, the current merchants are willing to offer a strong price, cherish the heart of sales gradually appear, so it is expected that the subsequent arrival of less goods, the spot price in the market will show an upward trend. 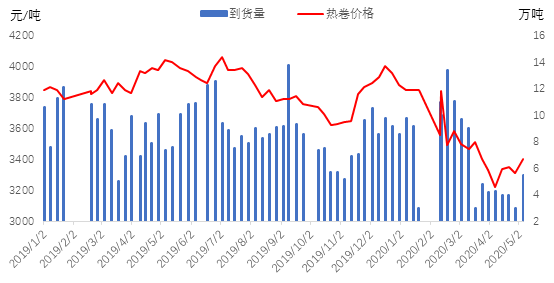 Tianjin market: the volume of goods in this market has risen for many weeks, reaching twice the average in recent weeks. Attention has been drawn to the risks of subsequent pressure on northern prices since April, a view that has so far remained unchanged, although it has not been evident on the back of northern demand. From the spot price trend of Lecong and Tianjin market in May, we can see the signs (as of May 6, Lecong hot roll 3400 yuan / ton, Tianjin 3350 yuan / ton), suppressed by the increase in supply, the Tianjin market gradually showed a weak upward trend. And subsequent northern prices are expected to be weaker than southern prices.