SMM: April 8, the General Office of the Shanxi Provincial Government issued a "notice on the implementation of special awards for automobile consumption." Shanxi consumers newly purchased by the province's vehicle enterprises to produce the whole vehicle, give the purchase of vehicles one-time consumption reward.

The reward standards are: commercial models such as passenger cars with a load of more than 7 meters, medium-weight trucks with a load of more than 4.5t and tractors of the same class, with a reward of 8000 yuan per vehicle, 6000 yuan for passenger models such as cars, SUV and MPV, and 4000 yuan for minibuses and other commercial vehicles under 3.5m. Among them, the reward object of passenger car consumption must be the natural person consumer.

The incentive period ends on December 31, which shall be subject to the time of registration of motor vehicles. The consumption reward shall be advanced by the automobile sales organization, that is, the consumer shall pay for the purchase of the car according to the amount of the price deducted from the consumption reward issued by the piao. After that, the municipal industrial and credit departments, together with the financial departments at the same level, settle the accounts with the sales organizations on a monthly basis. 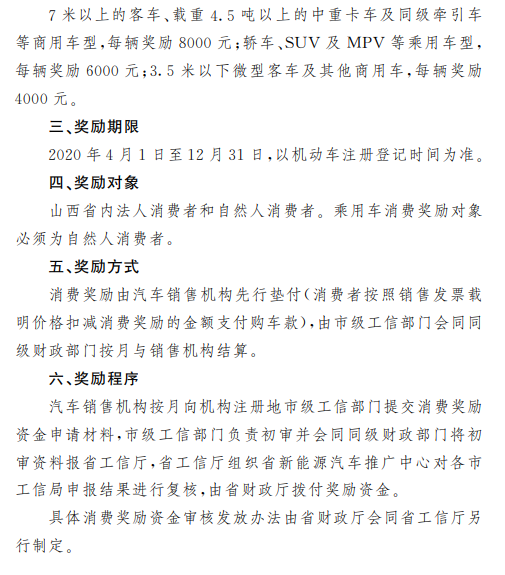