SMM: for power battery manufacturers, patents are life, which has led to a lot of disputes. 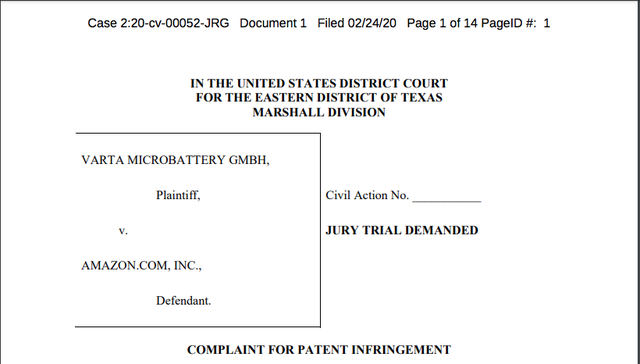 VARTA's indictment against Amazon. Photo: according to the indictment on the Eastern District Court website in Texas, VARTA believes that the battery manufacturers that constitute the infringement include Lithium.

According to reports, before suing Amazon, Best Buy and Costco, VARTA also sued Samsung Electronics USA in the United States, arguing that its headphone products were suspected of infringement. 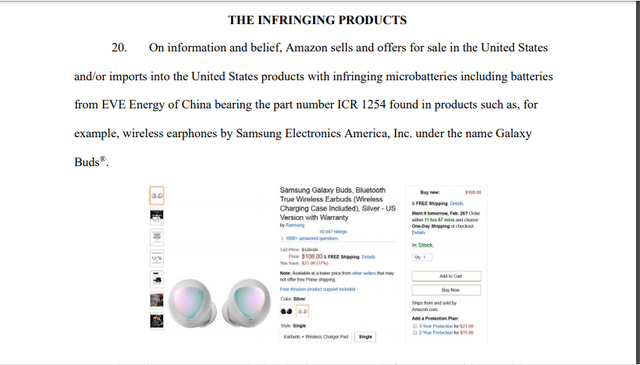 The VARTA indictment alleges that Lithium's products are suspected of infringement. Photo: on the evening of March 25, on the official website of the Eastern District Court of Texas, Lithium released a notice saying that it had not yet received an indictment from VARTA.

Yiwei Lithium claims that it has 58 patents and patent applications for bean batteries, and the company relies on its own patented technology to produce and sell bean batteries.

The company also said that it will provide support at any time to meet the needs of customers and make every effort to actively protect the legitimate rights and interests of Lithium and customers from infringement.

It is reported that in January this year, the patent war between VARTA and Lithium has been ignited in Germany.

VARTA is a German manufacturer of miniature lithium batteries, mainly for cordless phones, watches, hearing aids and other battery products, its trademark is CoinPower.

VARTA used to be the only battery supplier for Samsung, Sony, Jiebolang and JBL, but in recent years, Chinese battery manufacturers have become more competitive and have stolen a number of orders.

On January 8, VARTA said it would sue Lithium and a Chinese company called MIC-Power in Germany for infringing its patents.

Lithium also responded to VARTA's lawsuit in Germany in its announcement on March 25.

In January, VARTA applied for a temporary injunction in a court in Brunswick, Germany, Lithium said.

According to German law, the VARTA may not reinitiate a temporary injunction on the basis of the case.

In January, VARTA also filed a patent infringement lawsuit against customers selling lithium products in Mannheim, Germany. Lithium said the lawsuit had not yet been heard.

To meet market demand, Yiwei Lithium said on March 8 that it plans to raise no more than 2.5 billion yuan for three major battery projects and replenish working capital. Among them, 1.05 billion yuan of the funds raised will be invested in the bean lithium-ion battery project for TWS applications.