With global economic problems, geographical tensions and so on, it is easy to understand why traders and investors may ignore silver at a time when gold is skyrocketing. But analysts see big moves brewing in silver, written by FX Empire's Chris Vermeulen, who has more than 20 years of technical analysis and trading experience.

So far this year, despite the explosion of market news, silver has not yet begun to fluctuate like other precious metals. Silver failed to keep up with gold last week when the conflict between the United States and Iran triggered a surge of $70 in gold. Since 2016, gold has risen by more than 45 per cent, palladium by more than 350 per cent and silver by just 29 per cent. The gold-to-silver ratio is now 86.7, very close to the highest level in 25 years.

Historically, silver has generally rebounded within six to 12 months of rising gold prices. The biggest flashpoint in the gold-to-silver ratio typically occurs when the price of gold is rising 30% to 60% faster than silver. In other words, when there is a significant difference in the relative price of gold and silver, silver rises even higher, causing the gold-to-silver ratio to fall. 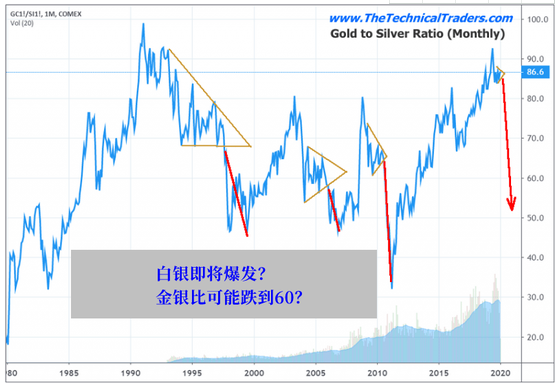 At present, the relative price of gold to silver is more than 200%. Given this fact and the recent poor performance of silver, the researchers believe that silver is establishing a large-scale bottom shape in preparation for an explosive upward trend.

The team compiled the following chart to illustrate the upward potential of silver. This month's chart highlights the link between the ratio of gold to silver (dark blue), the price of gold (gold) and the price of silver (light blue) over the past 20 years.

As the chart shows, silver rises at an alarming rate over the next five to 12 months each time gold breaks through horizontal form and starts to rise sharply. 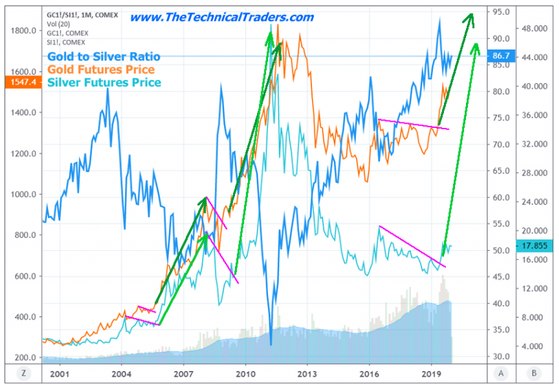 The current trend of gold and silver is almost the same as before, that is, the price of gold has risen because of market concerns about the economy or the global situation, resulting in a huge gap between the prices of gold and silver. Research suggests that silver is building a strong bottom shape for skyrocketing, which may be an incredible opportunity for senior traders.