CST
Source:SMM
In Jan-Nov, materials from the top supplier Indonesia soared 125% year on year on the back of rising new smelting capacity in the country

SHANGHAI, Dec 30 (SMM) – About 229,000 mt in physical content of nickel was imported into China in the form of ferronickel (FeNi) and nickel pig iron (NPI) in November, showed the latest Customs data.

In January-November, materials from the top supplier Indonesia soared 125% year on year on the back of rising new smelting capacity in the country. The world’s top nickel miner Indonesia would ban nickel ore exports from January 2020 as it seeks to process more of its resources at home. 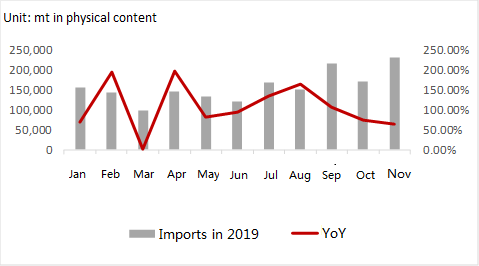 On Ni content basis, China’s overall imports in November were roughly the same as that in September, standing at 34,600 mt, even as the imports in physical volumes last month were 14,000 mt higher than September.

SMM expects China’s monthly average imports of FeNi and NPI to stay at high levels of 30,000-35,000 mt in Ni content before commissioning of new stainless steel projects in Indonesia.

China NPI production fell 4.5% in March
Last month, output of NPI in China extended its downtrend that began since November 2019, decreasing 4.46% from March to 40,200 mt Ni, some 12.25% lower than the same month a year ago, showed SMM data.