CST
translation
Source:SMM
SMM10 28 / PRNewswire-FirstCall-Asianet / SMM believes that the discharge of domestic concentrates is limited due to environmental protection maintenance and other reasons; the incremental release of foreign concentrates is smooth, from the point of view of supply and demand, the cumulative output of smelters this year has been higher than that of the same period last year. Under the situation that the discharge of domestic zinc concentrate is limited and the increment of foreign zinc concentrate is considerable, the smelter increases the demand for raw materials driven by high profits. Even if the import profit window is only occasionally opened this year, the amount of imported zinc concentrate is still high.

Although the profit and loss of imports was negative for nearly 67 per cent of the time from January to August this year, the amount of imported concentrate was still considerable, with monthly imports in the range of 8.2-137000 metal tons. SMM believes that the reasons are as follows: 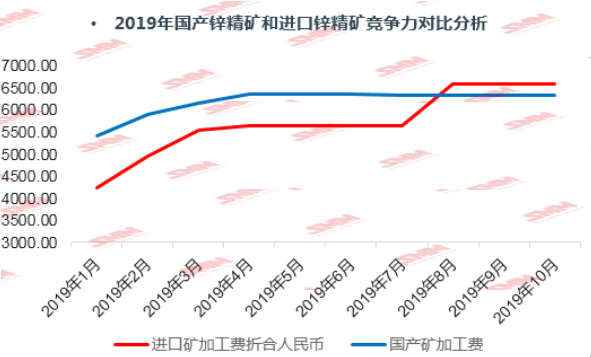 The discharge of domestic concentrate is limited due to environmental protection maintenance and other reasons. The incremental release of foreign concentrates is smooth, and the increment of overseas mines is the main contradiction point of the decline in prices in the early stage. from the point of view of supply and demand, the cumulative output of smelters this year has been higher than that of the same period last year, and the enthusiasm of domestic mines to erode production enthusiasm is insufficient and limited at the same time.

At present, although the price of zinc has dropped somewhat, the processing fee has remained stable, and only the processing fee has been slightly reduced in some areas. Based on the profit analysis of 2-8%, 5000 yuan / metal ton is taken as the average cost of the smelter, 10000 yuan / metal ton is taken as the average cost of mine production, and the arrival processing fee is 6500 yuan / ton. Even if the zinc price falls to 18500 yuan / ton, the profit of the smelter is still 6500 + (18500-15000) * 0.2-5000 million yuan / metal ton. It is at a relatively high level in history, and the profit of mining enterprises is 18500-(18500-15000) × 0.2-6500-10000 yuan / metal tonne. Compared with the two, it can be found that the current profits are still mainly concentrated in the hands of refineries. The production enthusiasm of smelters is less affected by zinc prices, and the current demand for raw materials is still high.

To sum up, under the situation of limited discharge of domestic zinc concentrate and considerable increment of foreign zinc concentrate, smelters have increased demand for raw materials driven by high profits, even if the import profit window is only occasionally opened this year, the amount of imported zinc concentrate is still high.