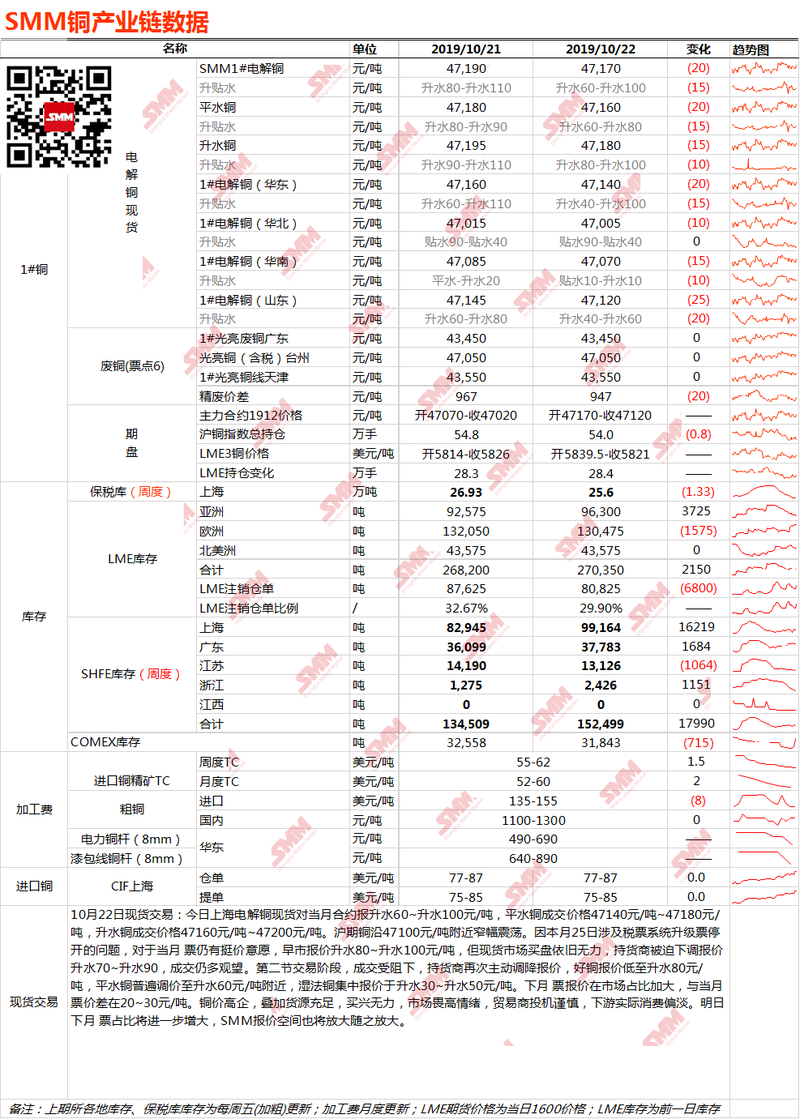 [10.23 SMM Bronze Morning meeting Summary] Macro aspect: 1) British Prime Minister Johnson's rapid passage of the Brexit bill has been rejected, which means that the plan for a smooth "Brexit" at the end of the month has failed. Johnson later confirmed that he would suspend legislation on the Brexit agreement bill pending news from the European Union. 2) API crude oil stocks in the United States increased by 4.45 million barrels in the week ended October 18 and are expected to increase by 1.725 million barrels. OPEC and its allies are considering further cuts in crude oil supplies at the December meeting because of concerns about weak demand growth prospects in 2020, four OPEC sources said. Fundamentals: 1) Copper concentrate: the Chuquicamata mine in Codelco, Chile, the world's largest copper producer, will join a two-day strike, which Codelco's union encourages workers at all mines to join. 2) scrap copper: the price difference of fine scrap yesterday was 947 yuan / ton. As the interval between the four batches of scrap copper import is relatively long, the import of scrap copper will still arrive in Hong Kong in a short period of time, the supply of imported scrap copper is still continuous, and some waste enterprises have purchased copper ingots for raw material replenishment, so the market is not in short supply for the time being, but it is expected that after one or two months, the import scrap copper will become tighter, and enterprises will gradually need to supplement through domestic scrap copper or copper ingots, and the impact on enterprise production will gradually appear. 3) Import of copper: there was a loss of about 200 yuan / ton on imports yesterday. The price ratio has fallen continuously, the demand of the foreign trade market continues to decrease, and the market activity decreases. Due to the high cost of holding goods, and more opportunities to open the early window, traders still have the willingness to raise prices, most of the quotations still remain high, waiting for the future market to improve, some have taken the initiative to lower the quotation phenomenon, but the transaction is still less, the price temporarily shows a stalemate. If the subsequent price comparison continues to fall, the premium is difficult to strengthen. 4) inventory: LME copper stocks increased by 2150 tons to 270350 tons on October 22, while copper warehouse receipt stocks in the previous period decreased by 700 tons to 61220 tons. 5) spot: in the spot aspect, due to the high level of the disk, and the gradual weakening of the market demand for long-term bills, the demand for superimposed short-term bills is also basically completed, so the overall transaction is gradually light, and the holdings have relaxed their prices. It is estimated that the spot water will rise by 40 yuan / ton today. Copper prices and forecasts: copper prices fell last night, mainly due to pessimistic Brexit sentiment, sterling fell back to around 1.28, the dollar rose slightly and stabilized at 97.5, copper prices slightly under pressure to fall slightly. At present, Brexit is still the main motivation affecting copper prices, and the British Parliament voted against the motion to quickly pass the Brexit bill, the market risk aversion mood has been revived, and the CMX gold price has basically remained stable at the 1500 level, which has also put bearish pressure on copper prices. The global economic situation has still not improved significantly, the US existing house sales data for September were lower than expected, the market further increased its expectations for the Fed to cut interest rates, and API crude oil stocks continued to rise sharply, reflecting that the market continues to be bearish on manufacturing demand, and there are no obvious positive signs in the economy as a whole, and there is some pressure on copper prices to rise. It is expected to fall back slightly today. It is estimated that today's copper 5780-5820 US dollars / ton, Shanghai Copper 46800-47100 yuan / ton.