Core strategy: grasp the rhythm of time, meet the low in the middle and late October to do more nickel, more than single to continue to hold

Core logic: 1. The nickel supply gap will gradually expand in 2020, with potential benefits on the supply side; 2. The import of nickel and iron is incremental or less than expected, and there are potential policy restrictions; 3. Stainless steel plants have almost no bargaining power over nickel, resulting in a large room for nickel price elasticity.

China's Castle Peak Holdings Group shipped nearly 25000 tons of nickel from London warehouses, equivalent to nearly 20 per cent of Lunni stocks, just before Indonesia imposed an export ban on its original nickel mine, according to people familiar with the matter, causing the biggest drop in nickel contract history in about 40 years. At the same time, Castle Peak is working with financing banks, including JPMorgan Chase, to divest the metal from the exchange. At 130000 RMB per tonne of nickel, the recovered metal is worth about 3.4 billion RMB. In addition, LME's order records show that an additional 75000 tons of nickel metal are scheduled for delivery. From September 30, 2019 to October 11, 2019, Lunni stocks fell from 157986 tons to 98562 tons, a decrease of 37.6 per cent, according to the data. If 75000 tonnes of inventories are delivered at a later stage, Lunni inventories will be close to emptying, leading to panic concerns about nickel supplies in the market. 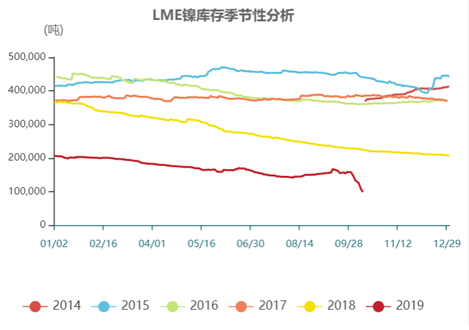 Based on the above situation, although the market longing sentiment driven by the reduction of Lunni inventory is not immediately reflected on the recent disk, the liquidity of nickel has declined, nickel has changed from dominant inventory to invisible inventory, and the intention of large groups to monopolize nickel resources has been very clear. We think, 1. The nickel supply gap will gradually expand in 2020, with potential benefits on the supply side; 2. The import of nickel and iron is incremental or less than expected, and there are potential policy restrictions; 3. Stainless steel plants have almost no bargaining power over nickel, resulting in a large room for nickel price elasticity.

I. the supply gap of nickel will gradually expand in 2020, and there are potential advantages on the supply side.

At present, the global supply and demand for nickel is about 150000 tons per month, and the total supply in China is about 100000 tons. In China's supply structure, the degree of dependence on foreign countries is very high. The only metals we can produce are Jinshan, Gene, and so on. These enterprises have some of their own mines in China, but this output is basically very small elastic space. Although we can produce nickel and iron ourselves, most of the raw materials of nickel and iron need to be imported. Apart from self-production, most of the metal nickel is also imported, so overall, the degree of external dependence is as high as 75%, and even higher in a few years.

Before 2014, our country mainly depended on importing Indonesian nickel ore, but after Indonesia banned in 2014, our country can only increase the import of nickel mine from the Philippines. So far, the import of nickel mine is still dominated by the Philippines. But one problem with the Philippines is that it is highly seasonal. It has three main nickel producing areas, namely, three Barris (Zambales), Palawan (Palawan) and Suriname (Surigao), of which Surigao is the largest, accounting for 50-60 per cent of the total shipments of the Philippines. However, the rainy season of Surigao is contrary to that of the other two main producing areas, so imports of nickel mines will continue to decline from October to April next year. According to the data of previous years, the rainy season will affect the export of nickel mines in the Philippines. From November 2019 to April 2020, China is expected to reduce the import of about 9 million tons of nickel mines, equivalent to about 135000 metal tons (1.5 per cent of nickel content as the average). According to data released by the World Bureau of Metals Statistics (WBMS), there was a supply gap in the global nickel market from January to June 2019, with apparent demand exceeding production by 55500 tons. For the whole of 2018, the shortfall calculated was 95700 tons. Superimposed on January 1, 2020, Indonesia's mining ban policy, although the export effect of Indonesian nickel miners in the next three months is expected to intensify, but whether the actual production can keep up with the growth rate of demand, it may be extremely difficult to do so. In addition, the inventory level of domestic nickel mines is not high. As of October 12, 2019, China's port inventory is less than 12 million physical tons, with a nickel content of 1.5 percent as the average, the metal content is less than 180000 tons. If the fourth quarter can not continue to accumulate storage, superimposed on the impact of the rainy season in the Philippines from November to April next year, the domestic reduction will be enlarged next year.

As a result, China's nickel supply shortage is expected to expand next year, with a shortfall ranging from 150000 tons to 200000 tons. However, for the fourth quarter of this year, based on the current supply situation of nickel mines, we do not believe that there will be a serious shortage of nickel mines in the short term, which is also the core factor restricting further increases in nickel prices after the landing of the mining ban policy in the third quarter. In the emotional side of the storm calm, nickel prices will maintain a high shock situation in the short term, so from the fundamentals, we think that the possibility of nickel prices reaching a new high in the fourth quarter is small, until the expansion of China's nickel supply gap. 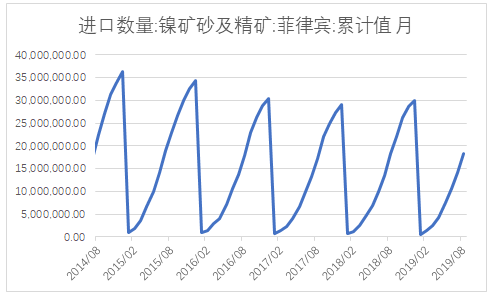 II. Nickel-iron import increment or less than expected, and there are potential policy restrictions

First of all, from the point of view of the production conditions of Nife itself, we believe that the main reasons for the slow release of nickel and iron production in Indonesia are the backwardness of local infrastructure, the lack of labor quality and the difficulty of project approval. Indonesia is made up of 17508 large and small islands, of which more than 6000 are inhabited and are known as the nation of thousands of islands. The mines purchased by nickel mining enterprises are also distributed in scattered small islands, the infrastructure of the small islands is not perfect, and even some mines are relatively remote. In infrastructure construction, it usually starts with the construction of power plants and roads, and then the gradual allocation of smelting furnaces. At the same time, most of the smelting methods used in Indonesian nickel and iron plants are RKEF pyrometallurgical smelting process. It takes laterite nickel ore as raw material, adds limestone, reducing agent and other raw materials, and processes raw ore through rotary kiln, ore heating furnace and converter. The cost of RKEF process is the most sensitive to the price of nickel laterite and electricity, and the adequate protection of electricity is an indispensable part of smelting. Therefore, the whole process is difficult, time-consuming and costly.

In terms of labor force, Indonesian local residents are less efficient and most of them have not received comprehensive technical training. It is understood that the day after the payment of wages, there will usually be no one to go to work on the site, in the case of insufficient labor can not be guaranteed, but also part of the constraints on the release of Indonesian nickel and iron production. However, in the later stage, with the ban on mines in Indonesia, pushing up the price of nickel at the same time, the bargaining power of nickel mine increased, which led to the widening profit of Nife, which will stimulate the production of the local Nife project under the high profit of Nife.

In terms of the examination and approval process, for the permission to use the mine, the enterprise not only needs to obtain the approval of the Indonesian government, but also needs to obtain the consent of the patriarch on the island, and the patriarch has a greater voice on the island, so the whole approval process is longer and more difficult, which restricts the speed of mining and smelting.

Similarly, assuming the rapid release of nickel and iron production capacity in Indonesia and the Philippines, after import into China, disrupt the trade order, it is very likely to repeat the road of anti-dumping investigation. As far as Indonesia is concerned, attracting foreign-funded enterprises to set up factories in the country is in fact hoping to promote domestic employment and promote national development. If foreign businessmen only regard Indonesia as a processing site and make use of Indonesia's nickel resources, it is a departure from the original intention of the Indonesian government to cooperate. From Indonesia to ban the export of high-grade nickel ore, and then ban the export of low-grade nickel ore, the promulgation of export quotas can also see the intention of the government, it hopes that high value-added products can stay in the country, and promote the country's economic development. Therefore, from China's self-trade protection and the Indonesian government's original intention to attract investment, these two points of view, high-grade nickel-iron export restrictions are just around the corner. Recently, from the Qingshan Iron and Steel Research, Qingshan headquarters assigned to the subsidiaries of nickel and iron is about to tighten, and has begun to hoard nickel iron, Castle Peak as a weather vane of China's stainless steel industry, which implies that the acquisition of nickel resources in the market will be more difficult. In the environment of supply shortage, demand growth and low inventory, a sharp rise in nickel prices is just around the corner. 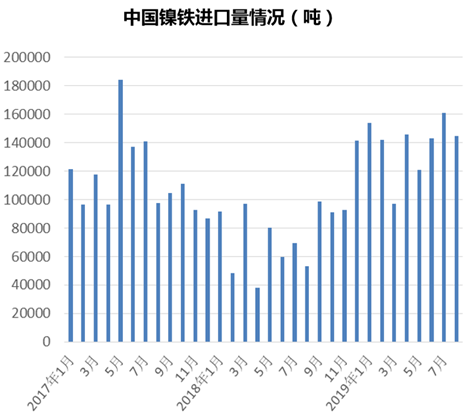 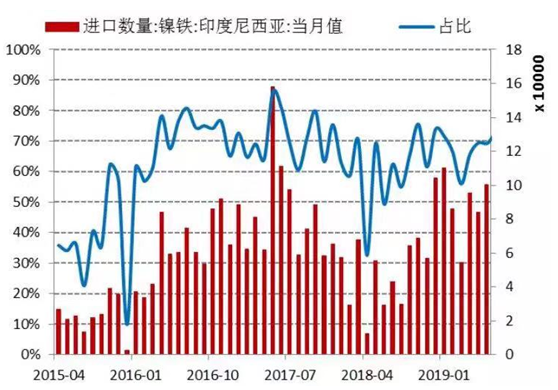 Source: mainland Futures of the General Administration of Customs of China 3. Stainless steel plants have almost no bargaining power over nickel, resulting in a large room for nickel price elasticity.

Historical data show that stainless steel is in line with the rise or fall in nickel prices. When the nickel price reached a high of 480000 yuan / ton in 2007, the price of stainless steel exceeded 40, 000 yuan / ton. At that time, the environment was due to the scarcity of nickel resources, there was a serious contradiction between supply and demand, people can only use nickel sulphide ore to extract nickel, laterite nickel ore has not been found. It is estimated that there will be a serious contradiction between global nickel supply and demand by 2020, but it is more likely that nickel resources will be scarce in China. Take the recent 36 per cent decline in Lunni inventories as an example. In the future, nickel pricing power may be in the hands of groups with nickel metal resources. In the long run, we believe that the upside of nickel is worth imagining. In the short term, the pattern of the contradiction between supply and demand is not established, and the decline of consumption in the lower reaches does not have the driving force to rise continuously, but in the later stage, it is expected that the tightening of nickel supply will support the nickel price, and the nickel price will remain high until the nickel supply gap in China is enlarged.

Stainless steel
nickel and iron
For queries, please contact Frank LIU at liuxiaolei@smm.cn
For more information on how to access our research reports, please email service.en@smm.cn