SMM News: at the beginning of this year, it was expected that the price gap between Brent crude oil and WTI crude oil would continue to narrow, mainly based on the Permian period in the United States in the third quarter will increase the volume of crude oil exports, which will lead to low domestic inventories, but will trigger the risk of inventory growth in other parts of the world except the United States. The spread between Brent and WTI, which was about $10 a barrel in early 2019, has fallen to $3 a barrel, narrowing by $7. Looking forward to the fourth quarter of this year, crude oil is still in a bearish trend, on the one hand, U. S. production is still high, and OPEC+ production reduction has run out of skills. On the other hand, the existence of global crude oil depots has not fallen sharply in the summer. After entering the off-season of consumption, the rise of inventories superimposed trade risks, and it is difficult for oil prices to return to the upward trend. When oil prices plummeted in 2015, Brent was far weaker than WTI, and the price gap was negative at one point. At the end of this year, there is likely to be a repeat of the tragedies of 2015. 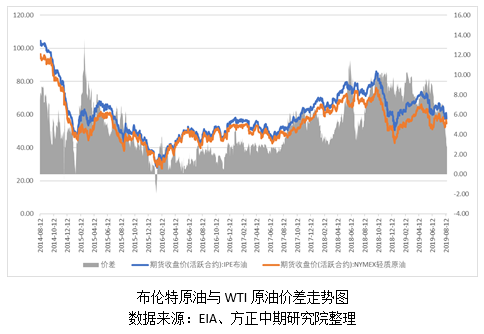 Us crude oil exports rise to a new level

The median value of the average US crude oil export volume remained at 2 million barrels per day in 2018, while this year's crude oil export volume has reached 3 million barrels per day, 1 million barrels per day higher than last year as a whole. At present, the crude oil production in the United States is about 12.3 million barrels per day. We have seen that although the number of Baker Hughes drilling rigs has been in a state of decline this year, the production has not declined, mainly due to the continuous decline of inventory wells on the US side. The use of once accumulated inventory wells continues to complete and increase production, which, on the one hand, saves upstream expenses, but also enhances the cash flow of its own enterprises and improves the rate of return of shareholders. The debt ratios of many US shale oil companies are falling. Even if oil prices plummet again in the future, they are expected to survive the winter.

We know that although Saudi Arabia is reducing production this year, its crude oil export volume has not dropped significantly, and has been maintained at about 7 million barrels per day. It mainly uses its own stocks to adjust its export volume. Although production is declining, it has not had much impact on the global crude oil market. Secondly, Russia is likely to increase production, because there is more and more opposition at home. Even though OPEC+ production has been reduced, the US shale oil is still increasing production. There is no point in such a reduction in production. In the future, if Brent oil prices exceed $50 a barrel, then U. S. crude oil exports are profitable. 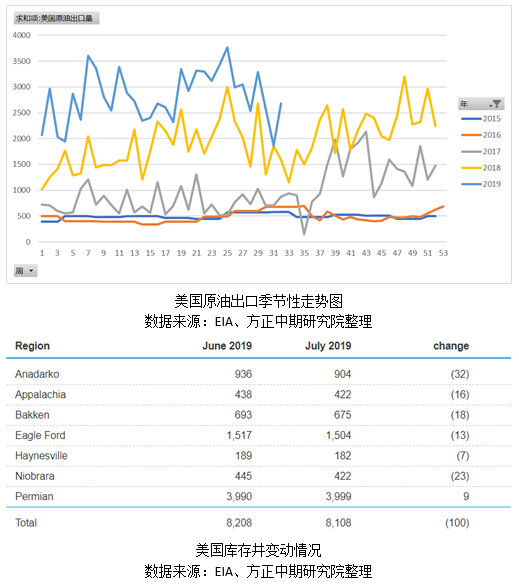 The monthly difference structure of crude oil still presents a deep back structure, and may be transformed into contango in the future.

The turning point for crude oil this year was in May, when both Brent and WIT crude oil showed a deep back structure, but after the collapse in oil prices in May, Brent's deep back structure began to weaken, from a monthly difference of as high as $1.50 to $0.50. However, the WTI still presents a deep back structure, with a monthly deviation of about $1.50. On the other hand, the strength of the lunar deviation structure can also see the recent trend of the two oil price benchmark. Generally speaking, the stronger the spot demand, the deeper the back structure, but this is not quite in line with the reality. We know that the current trend of oil prices is actually very weak, mainly due to the decline in demand expectations caused by the upside-down of US bond yields and global trade frictions. The Back structure can easily lead to a rise in inventories in the future, mainly due to weak forward prices. It is not cost-effective for producers to preserve their value in the far month, and it will also encourage producers to step up production and allow crude oil to be sold on the spot market as far as possible, so that inventories in the market will increase. Therefore, from this point of view, the oil price is far from reaching the bottom, and summer is the peak season for crude oil consumption. At this time, inventories show signs of rising in August, and after entering September, it is also the stage of crude oil inventory accumulation. Therefore, the downward pressure on oil prices is still greater in the second half of the year. 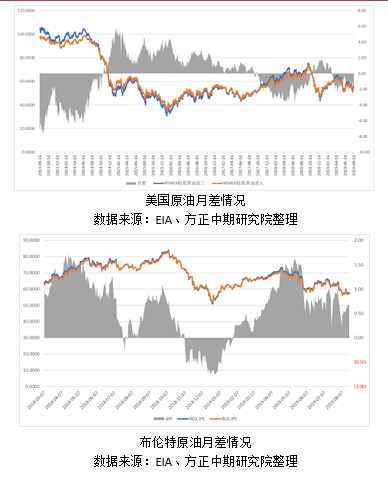