SMM News: in the first half of 2019, the global car market is still overcast, "down" the word at the head. Slowing economic growth, a trade war, increasingly draconian emission standards, and the fact that China, an important market for many car companies, is no longer growing at a high speed, have led to a sharp tightening of revenues and even fewer profit growth for many car companies. Of the 19 mainstream automakers in the world, 12 reported varying degrees of decline or loss, with Daimler, once one of the world's highest profit margins, having a net loss of $1.34 billion in the second quarter. Nissan's operating profit plunged 98.5 per cent in the second quarter.

At present, the slowdown in global car demand has affected the profits of international auto companies, and it has become common for car companies to have a hard time. Car companies have either issued a profit warning to lower their forecasts, or announced layoffs, or announced the closure of factories. At a time when the auto industry is in the doldrums, as carmakers invest heavily in new technologies such as electric, self-driving cars and ride-hailing services, huge investment spending makes it harder to make a profit.

The following is the income situation of the international mainstream automobile enterprises sorted out by Gaishi Automobile in the second quarter or the first half of this year for reference. It should be pointed out that the inventory is based on the latest financial statements of the major car enterprises, because some car enterprises are based on the financial year as the standard, so the market is the first fiscal quarter of 2020 (April-June) performance; and because the financial performance indicators used by each car company are different, it is difficult to unify, so what is extracted from the table is the performance indicators commonly used by most enterprises. 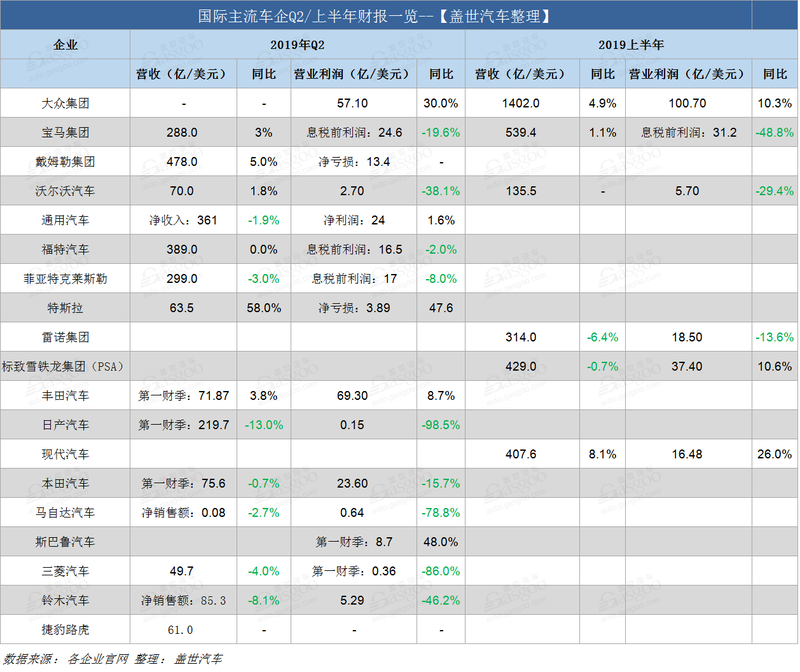 In the second quarter of this year, despite a decline in overall car sales, Volkswagen's operating profit jumped 30 per cent in the second quarter to 5.13 billion euros ($5.71 billion), driven by higher profit margins for Volkswagen brands SUV and higher sales for Porsche and Skoda brands.

As a result, Volvo announced a 2 billion Swedish kronor ($214 million) cut in fixed costs. The company warned that tariff threats and pricing pressures caused by trade disputes between China and the US were undermining its profitability.

Ford's net income fell 86 per cent to $148 million in the second quarter as a result of the ongoing global restructuring and costly updates to high-volume multi-purpose vehicles, while global revenue was $38.9 billion, unchanged from a year earlier; overall profit margins fell 2.4 per cent to 0.4 per cent. But excluding one-off items, Ford's profit before interest and tax fell just 2 per cent from a year earlier to $1.65 billion. Of this total, pre-interest and tax profit in North America fell 3 per cent from a year earlier to $1.7 billion. In fact, Ford made almost all of its pre-interest and tax profit in the second quarter from the North American market, compared with a loss of $155 million in Greater China.

Thanks to record results in North America and modest profits in Europe, FCA withstood a slowdown in the industry, with a net profit of 793 million euros ($880 million) in the second quarter. Revenue fell 3 per cent to 26.7 billion euros ($29.9 billion) as sales fell across the region from a year earlier. Adjusted interest and tax earnings totaled 1.52 billion euros ($1.7 billion), up from analysts' expectations of 1.43 billion euros.

Tesla's second-quarter revenue was $6.35 billion, below Wall Street expectations; the net loss was $389 million, down from a net loss of $743 million in the same period last year; and the net loss attributable to shareholders was $408 million, or $2.31 per share. Although it is a significant improvement from the loss of $3.06 per share in the same period last year, it is still well below the analyst's forecast. Tesla shares fell 12 per cent in after-hours trading after the results.

Renault's first-half profits were also hit by weak demand for cars and plummeting profits at Nissan, an alliance partner. Net income fell more than 50 per cent to 970 million euros ($1.08 billion), revenue fell 6.4 per cent to 28.05 billion euros ($31.4 billion) from a year earlier, and operating profit reached 1.654 billion euros ($1.85 billion), down 13.6 per cent from the same period last year. Operating margin also fell to 5.9 per cent from 6.4 per cent a year earlier. This contrasts with its domestic rival PSA Group, with a record profit margin of 8.7 per cent in the first half of the year.

Nissan's first quarter (April-June) operating profit was Y1.6 billion ($14.8 million), down 98.5 per cent from a year earlier; revenue fell 13 per cent to Y2.37 trillion ($21.97 billion) and operating profit margin was 0.1 per cent; net income tumbled 94.5 per cent to Y6.4 billion ($59.3 million). Nissan said its profitability was negatively affected by falling revenues and external factors such as raw material costs, exchange rate fluctuations and investment. To improve overall utilization, Nissan will cut its global capacity by 10 per cent by the end of fiscal 2022. To optimize production, the company will also cut about 12500 jobs.

Thanks to strong US sales of SUV such as Ascent and Forester, Subaru's global sales rose in the first quarter (April-June), resulting in a 48 per cent year-on-year increase in operating profit of Y92.2 billion ($870 million), higher than the average forecast of Y65.6 billion for eight Refinitiv analysts.

Suzuki said its operating profit fell 46.2 per cent in the first quarter (April-June) as it improved its vehicle testing system, leading to a drop in domestic production, coupled with falling demand for cars in India, its biggest single market.

In the past quarter, Jaguar Land Rover sold about 128615 vehicles worldwide and had operating income of £5.07 billion ($6.1 billion), an improvement of £954 million on free cash flow compared with the same period last year. Jaguar Land Rover forecasts that it is expected to make a profit this year, with a profit margin of 3% to 4% before interest and tax for the full year.