SMM News: after being named by the Ministry of Foreign Affairs of China, FedEx sued the US Department of Commerce: we are a transportation company, not a law enforcement agency. 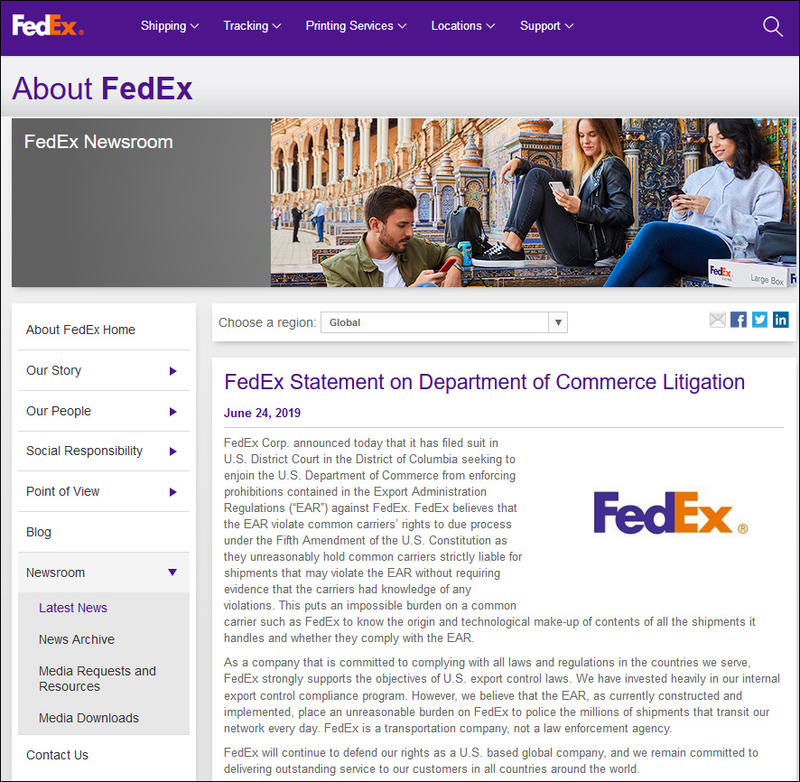 FedEx believes that under the Fifth Amendment to the United States Constitution, the Export Control regulations violate the legitimate rights of public carriers. The United States Department of Commerce unreasonably requires carriers to bear strict liability for shipments that may violate the Export Control regulations without being aware of any violations.

"this places a difficult burden on public carriers such as FedEx to bear the burden of (impossible), such as the need to understand the origin and technical composition of all their shipments and whether they comply with the Export Administration regulations." This is what the statement says.

FedEx complied with all laws of service-providing countries, strongly supported U. S. export control laws, and invested significant human and material resources in internal export compliance procedures, the statement said. "but we believe that the current construction and implementation of the Export Administration regulations put an unreasonable burden on FedEx, monitoring millions of goods every day to monitor (police). FedEx is a transportation company, not a law enforcement agency.

In the 19-page lawsuit, FedEx also wrote: "FedEx will inspect every package to be shipped, which will infringe on the privacy rights of the public." In terms of re-export, requiring FedEx to carry out indiscriminate inspection of every package abroad may violate existing civil privacy laws. "

In addition, FedEx did not directly mention "Huawei" in the statement and 19 pages of material.

The Observer Network previously reported that FedEx had made two recent mistakes with Huawei and apologized twice.

On May 28, local time, Huawei revealed that FedEx had shipped two packages from Japan to China as Chinese addresses to the United States and attempted to transfer two other packages sent from Vietnam to Huawei's other Asian offices, both unauthorized.

Huawei said the four packages included only documents and "no technology". In the light of the incident, Joe Carey, vice president of Huawei's public relations department, said it was reviewing its relationship with FedEx.

On the same day, FedEx China's official Weibo issued an apology, saying it was "sorry for the misshipment of a small number of Huawei shipments" and confirming that "there is no external request for FedEx to transship these shipments."

More than 20 days later, Seegan, chief analyst at PC Magazine, a well-known US IT magazine, revealed that a Huawei P30 Pro phone that should have been sent to the US from London was returned by FedEx on the grounds of a US government ban.

On the 22nd, FedEx again sent a statement to Segan, saying that Huawei's phone had been "mistakenly returned" to the sender, "We apologize for this erroneous operation," two contradictory explanations.

The Observer Network then saw the original text of FedEx's statement on the official website of PC magazine:

"the package under discussion was mistakenly returned to the sender, and we apologize for the error. As a global company with a daily throughput of 15 million units, we are committed to reducing the impact on our customers by complying with changing US regulatory policies, subject to all the rules. "

Huawei has also responded, saying that FedEx refused to deliver Huawei phones, "this is a complete misreading of [US] executive orders and the list of entities."

With regard to the return of FedEx, some media quoted relevant comments at a press conference of the Ministry of Foreign Affairs on the 24th, saying that FedEx is likely to be included in the "list of unreliable entities" by the Chinese Government. How do you comment on this?

In response, Chinese Foreign Ministry spokesman Geng Shuang said that FedEx, as a large multinational enterprise, should give a reasonable explanation to the outside world and should be responsible for its own actions. As to whether FedEx will be included in the "list of unreliable entities," I do not understand and suggest that you ask the competent authorities.

"if I remember correctly, this is not the first time FedEx has made a mistake with Huawei. A month ago, FedEx failed to deliver Huawei parcels by name. In such a short period of time, repeated 'mistakes' related to Huawei have repeatedly become the focus of public attention. I don't know how FedEx feels. "

Geng Shuang pointed out that the abuse of the concept of national security by the United States, using state forces to suppress a Chinese enterprise on unfounded charges is the root cause of the problem and the cause of the chaos. The bullying act of the US side not only hurts Chinese enterprises, but also hurts American enterprises, which not only affects the daily operation of enterprises, but also interferes with the normal cooperation between enterprises. We urge the US side to immediately stop and correct its erroneous practices so as to create conditions for the operation and normal cooperation of enterprises in various countries.

Federal
prosecution
the United States
the Department of Commerce
Huawei
For queries, please contact Frank LIU at liuxiaolei@smm.cn
For more information on how to access our research reports, please email service.en@smm.cn