It is understood that Rongbai Technology became the first domestic cathode material enterprise to achieve large-scale mass production of high nickel NCM811 in 2017. At present, the company has launched the third generation of high nickel NCM811 products, and the technology and production scale of NCM811 products are in a leading position in the world. The energy density of NCM811 power battery produced by capacity 100 technology can be increased by 25% compared with NCM523 product, and the advantage of energy density can be increased by more than 30% by subsequent optimization. In the aspect of cycle life, the number of cycles of single cell used in NCM811 cathode material has reached more than 2000 times at room temperature. 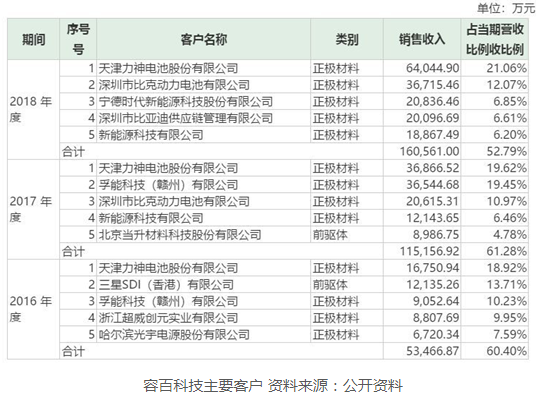 From 2016 to 2018, Rongbai's main business income accounted for 99.53 per cent, 99.33 per cent and 98.38 per cent of operating income, respectively, according to the prospectus. In 2016, 2017 and 2018, the sales revenue of Rongbai science and technology ternary cathode materials was 687 million yuan, 1.597 billion yuan and 2.63 billion yuan respectively, accounting for 78.01%, 85.60% and 87.90% of the main business revenue, respectively. in the past three years, the data has been growing rapidly, and the domestic market share of Rongbai technology ternary cathode materials has been stable at about 10%.

As a leading enterprise in the field of lithium battery materials, Rongbai Technology is favored by the capital market. Before Shangke Chuangban, it has carried out several rounds of financing. Investors include Jinsha River Capital, Sunshine Insurance, Changjiang Securities, Yunhui Capital, Shanghai Free Trade Zone Fund, etc., with a valuation of more than 10 billion yuan.

This time, Rongbai Technology plans to issue no more than 45 million RMB common shares (A shares), and the total amount of funds raised will be determined according to the actual number and price of the issue. After deducting the issuance expenses, the raised funds will be used for the 2025 power lithium power materials integrated base (phase I) projects and supplementary working capital. The project introduces advanced production and research equipment at home and abroad and will build a precursor production line with an annual output of 60,000 tons of ternary cathode materials.

The industry analysis shows that the ternary cathode material is the key core material of lithium battery, and the improvement of its capacity has an obvious effect on the energy density of the whole battery. Due to the adjustment of subsidy policy, under the guidance of national industrial policy and the dual stimulus of market demand, the domestic demand for ternary materials continues to grow, and to high nickel sustainable development, which brings great opportunities to positive material enterprises.